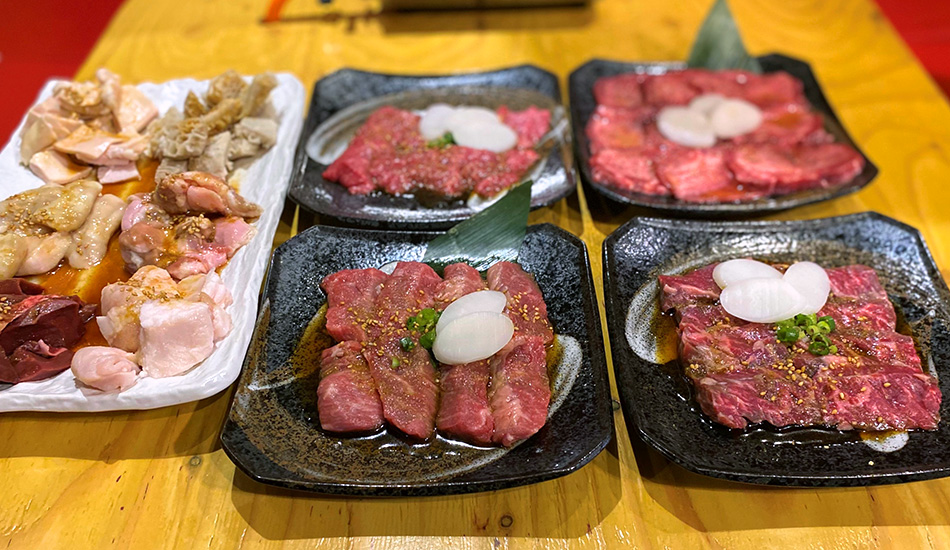 The sweltering dog days of summer in Tokyo are energy-sapping enough without the extreme heat residents and visitors have suffered through in 2022. One sure way to beat the heat (for carnivores at least) are plates of juicy grilled beef and vegetables washed down with lashings of one’s favourite chilled beverage. Yes, it’s yakiniku time! The arrival of Osaka Yakiniku Gyusho on Sunamachi Ginza is a real treat for lovers of grill-it-yourself wagyu beef, as we discovered on a recent visit. 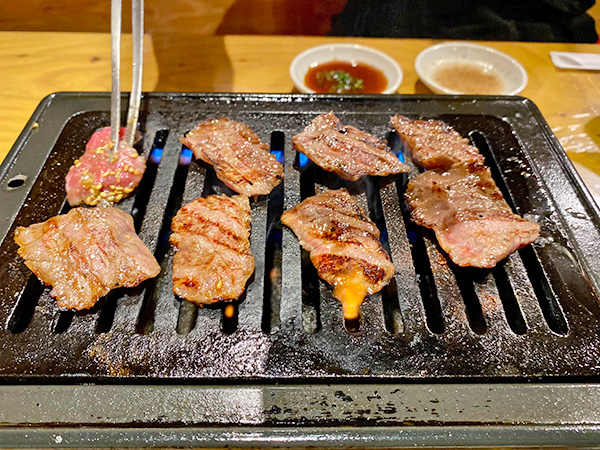 Kotomise coupon holders can enjoy a 5% discount on their bill. That’s a great offer!

Also a great offer is the low, low price of drinks. “All drinks are 299 yen (329 yen with tax),” said manager Mr. Kazuki Mori. “That’s beer, sours, cocktails, highballs, shochu, and soft drinks, everything.” Lunch is available only on weekends right now but that may change in the future. 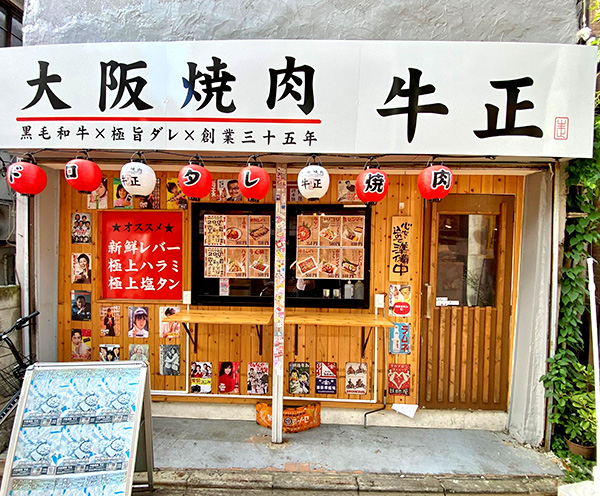 Osaka Yakiniku Gyusho is located just past the midpoint of Sunamachi Ginza if you enter from the Meiji Street end. As Mr. Mori explained, “The owners went with a Showa retro exterior while the interior is closer in design to that of our first restaurant in Osaka.” Showa retro is a nostalgic look back at the period of rapid economic growth in the post-war years of the Showa period, from the mid fifties to the late seventies, particularly in aspects of design. 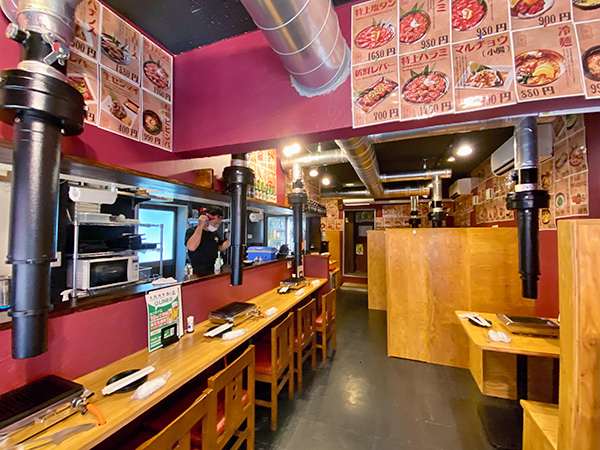 That first restaurant in Osaka opened in 1984 and is still going strong. The new place on Sunamachi Ginza only opened in May 2022 yet has already attracted a real crowd, media attention, and a host of repeat customers. It’s cosy, with tables separated by high wooden partitions and a counter for solo eaters or couples. Each grill has a powerful but quiet extractor fan directly above it to whisk away the smoke from the cooking meat. The tables seat 24 with an additional six at the counter. 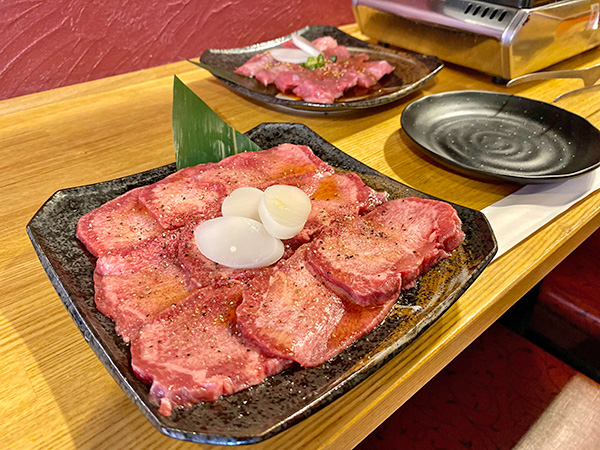 The meat’s the thing at a yakiniku restaurant, and all the meat at Osaka Yakiniku Gyusho is carefully selected domestic Kuroge wagyu beef. Grilling always begins with the lightest meat,

which is usually the tongue so as not to contaminate the grill with stronger flavours. The tongue was thick and juicy, the perfect way to start a meal. It’s 1,848 yen for one person, including tax. The photo shows a double serving for two people, as do all the photographs here. 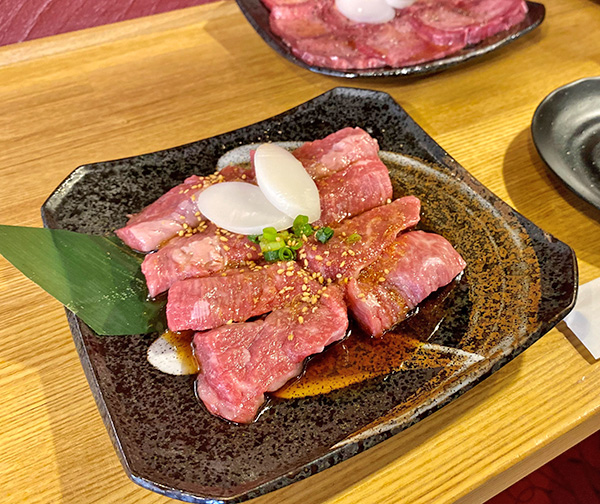 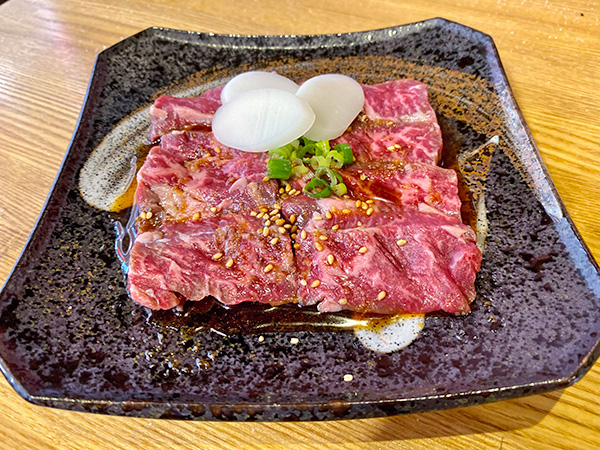 Skirt steak (harami) is a very popular yakiniku cut of meat, due to its juicy tenderness and robust flavour. This premium skirt steak (gokujo harami 1,936 yen per serving) has more marbling than the regular cut and is extra succulent. If you want really meaty meat, this is the one to order. As it’s often marinated, skirt steak is eaten towards the end of a meal. 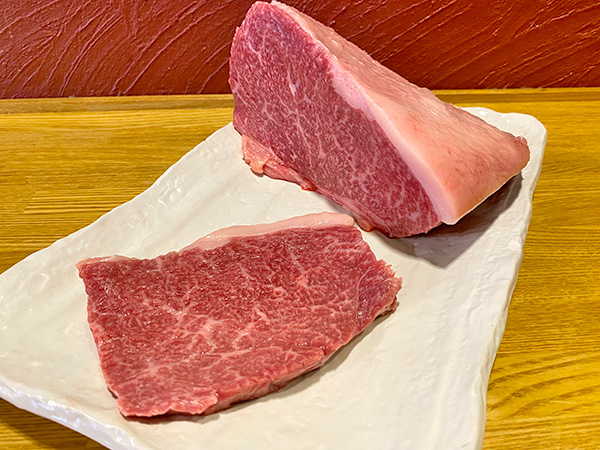 This hunk of beef is a slab of premium boneless short ribs (jo-karubi 1,573 yen per serving). The meat is marbled, juicy, and tender. Half-servings of all meats are available. The menu features a whole host of yakiniku restaurant favourite dishes, such as bibimbap, gukbap soup (kuppa) and namul vegetables. 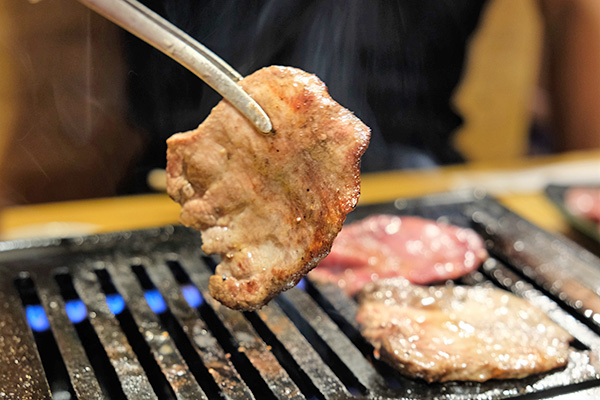 Mr. Mori fried up the grill and deftly began cooking a selection of meat, beginning with the juicy tongue, which we ate dipped in a refreshing lemony sauce. The premium shoulder meat (jo rosu) was sweet and super soft, while the skirt steak was immensely beefy and rich. Mr. Mori was confident in the quality of the meat at Osaka Yakiniku Gyusho and it’s easy to see why. 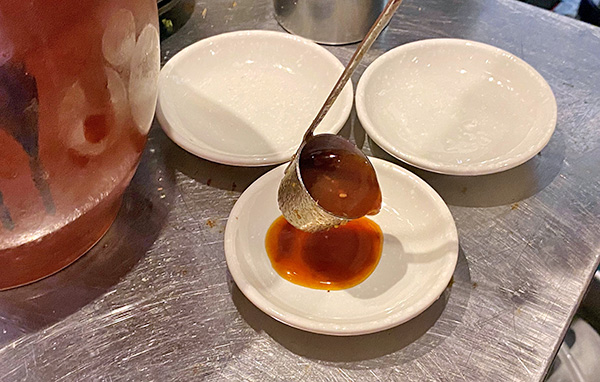 As Mr. Mori explained, one of the major differences between Osaka and Tokyo when it comes to yakiniku is the dipping sauce (taré). In Tokyo the sauce is quite watery, but in Osaka it’s thick and viscous. The recipe for the sauce is a secret known only to the owner and Mr. Mori, (even the other staff don’t know) but we can say it’s extremely tasty with a hint of sweetness. 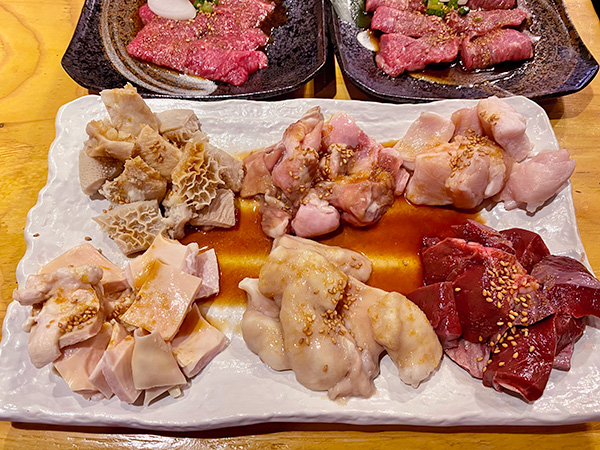 Offal, or horumon as it’s known in Japanese, is widely seen as being more popular in western areas like Osaka than in the east. That’s been changing recently in Tokyo as the high collagen content of horumon appeals to many women. Mr. Mori put together this selection consisting of, from top left: honeycomb tripe (hachinosu), abomasum (aka senmai), rumen (mino sando), aorta (korikori), small intestine (shocho) and heart (haatsu) bottom right. 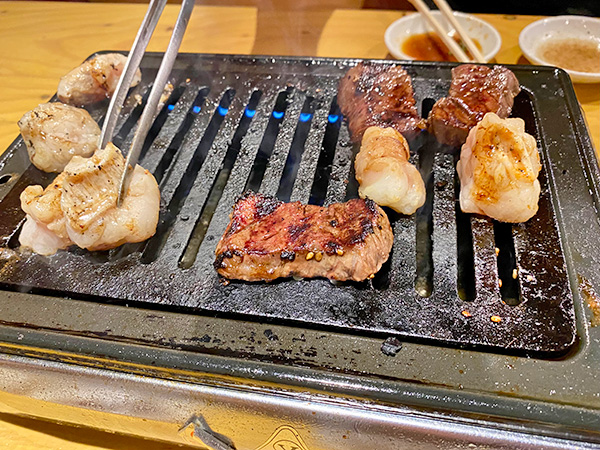 Both the abomasum and rumen are creamy and soft, bursting with umami goodness and collagen. Very nice! 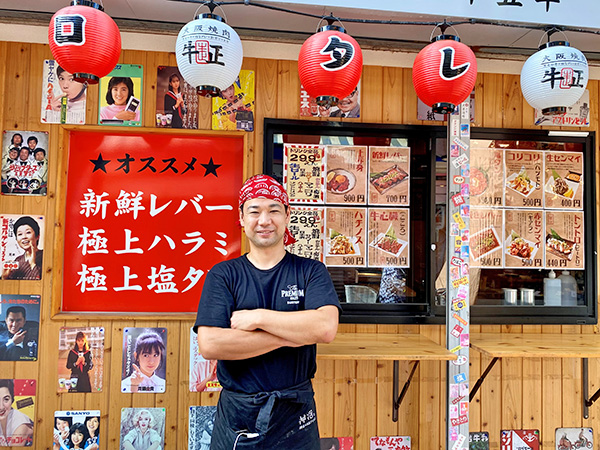 “We really like Sunamachi Ginza as a location,” said Mr. Mori. “It’s one of a fast-disappearing group of traditional Showa period shopping streets that have survived and are now beginning to thrive. Our place is lively, friendly and noisy in the real Osaka style. Come on down and enjoy some real yakiniku beef at reasonable prices, and don’t forget the cheap drinks!”

You can’t say fairer than that!