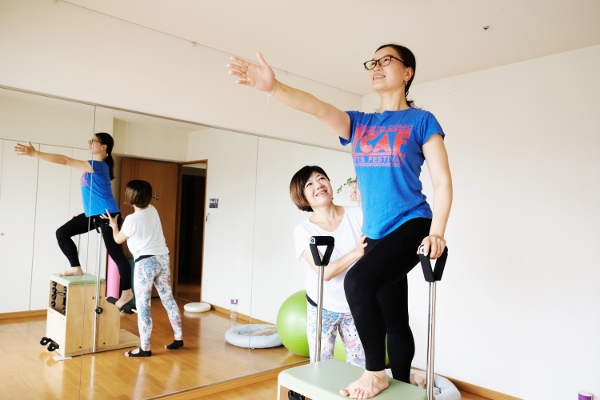 Getting Healthy with Personalized Pilates

I’d often heard the word “Pilates” mentioned in a casual, off-handed sort of way. It’s one of those words that most people have a vague enough notion of to let slide in conversations. Prior to coming into Nokko Studio (Pilates Nokko Studio), my own vague notion of Pilates included the fact that it was an exercise of some sort, that it was popular with celebrities, that it seemed to involve stretchy clothing, and…well, not much else. 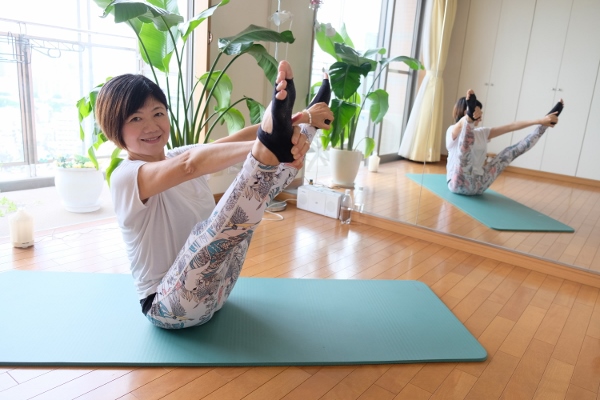 So “What is Pilates?” was a fundamental question I had to get answered when Ms. Nokko, the PHI-certified Pilates instructor and owner of the studio, kindly agreed to let me try out a condensed version of the private classes she offers in her 19th-storey classroom..

Before starting, Ms. Nokko taught me a little bit about Pilates, like the fact that it was invented by a German physical trainer who came up with the Pilates system for recovering invalids. Hence, it uses fairly simple movements and poses, supplemented by some very specific machines and tools, to help improve breathing, flexibility and muscle control.

“The most important thing it helps fix though, is your posture!” Ms. Nokko enthused, and we spent some time talking about the modern postural problems that arise from too much desk work, too much screen time, and just day to day life. But none of the movements or exercises takes up a lot of space, since they were first practiced on hospital beds; this means Pilates can be practised most anywhere with a cot-sized space! 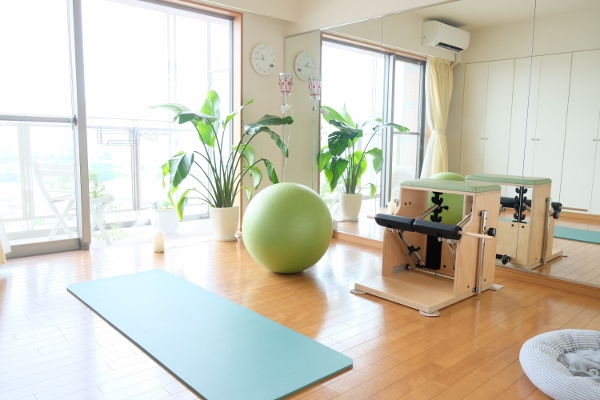 At Nokko Studio, a bright, clean space with lots of natural light is dedicated to practising Pilates. It’s compact, but provides more than enough space for Ms. Nokko, one student, and Ms. Nokko’s beloved pet (and fellow Pilates practitioner), Milly. 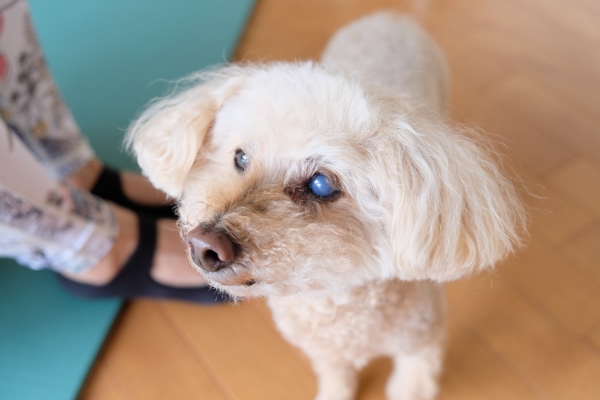 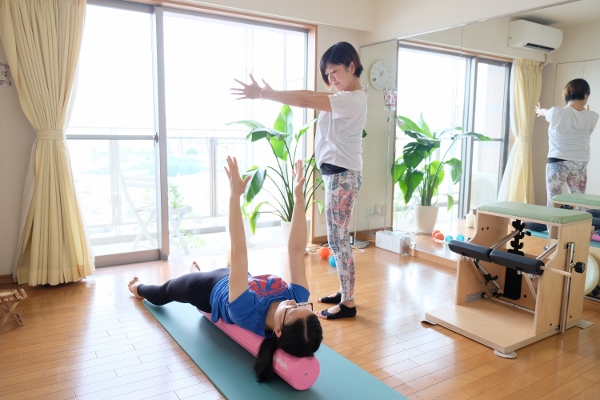 We warmed up by using a Stretch Pole, a type of foam roller. Ms. Nokko is a huge fan of the Stretch Pole, and after a brief encounter, I could see why. It feels great on the back when doing floor exercises, and helped to stretch out my pectoral muscles very effectively. It was also a great way to work on my balance at the same time! 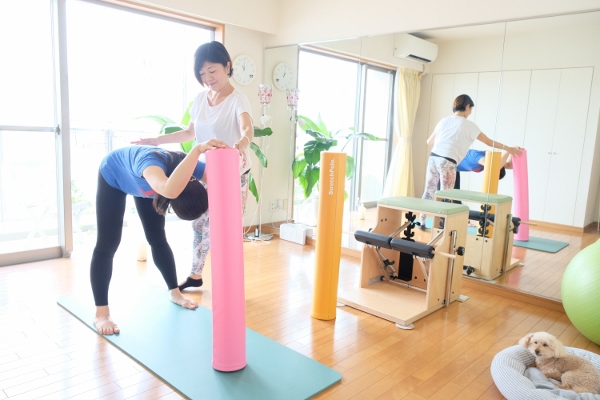 While we continued to work on various stretches, Milly hung out with us, chilling, napping and occasionally mimicking the poses made by her human (^^) 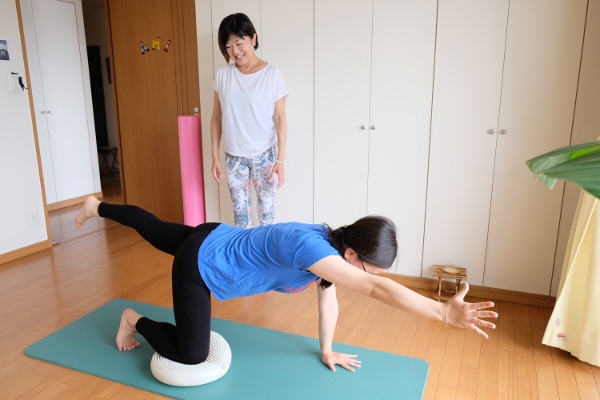 After warming up, we did some more floor exercises which focused on core muscle control (the white cushion is used to increase difficulty in balancing). It was from around this point that being able to breathe deeply and in rhythm with my movements became really important, a technique Ms. Nokko stressed and guided me through with due diligence. 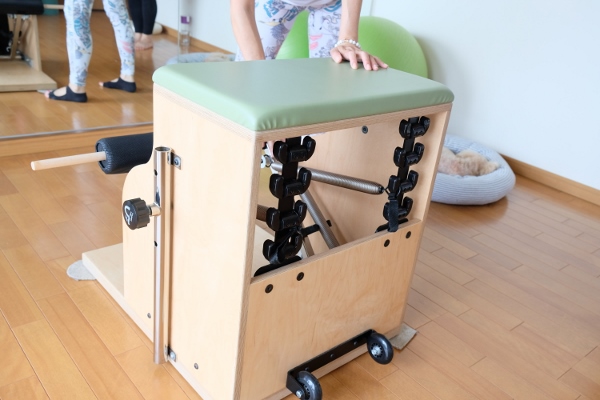 Then, Ms. Nokko showed me one of the basic machines used in Pilates: a curious-looking chair contraption with bars and springs installed. 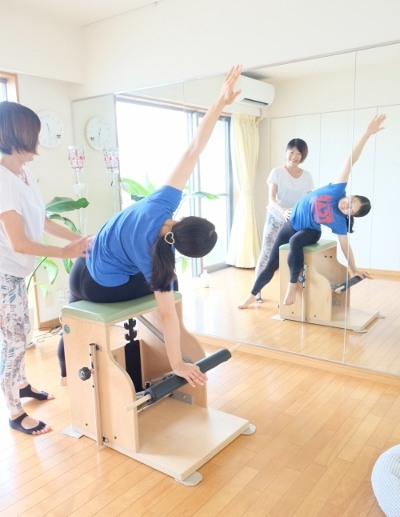 Chair exercises uses the bar-and-spring setup to help achieve a deeper stretch, such as while doing this mermaid pose.

“You should be feeling pulled in three directions,” Ms. Nokko told me. “You’re extending your body through the arm reaching up, the arm pushing down, and the feet you keep on the floor.”

It was an easy enough pose to get into, but tough to hold! I could feel my side muscles stretching deeply with each inhale though, and felt both relaxed and poised afterwards. 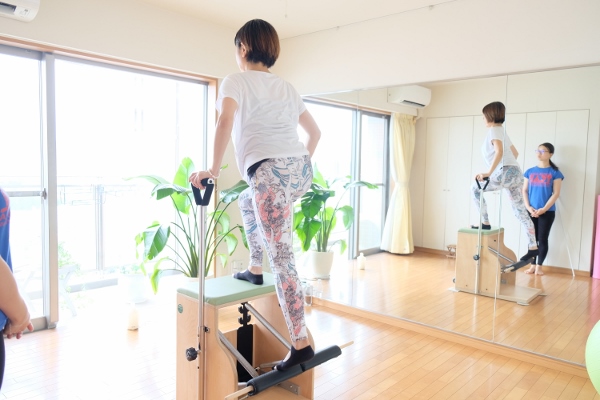 The chair can also be used for more strenuous exercises, such as this movement targeting leg muscles… 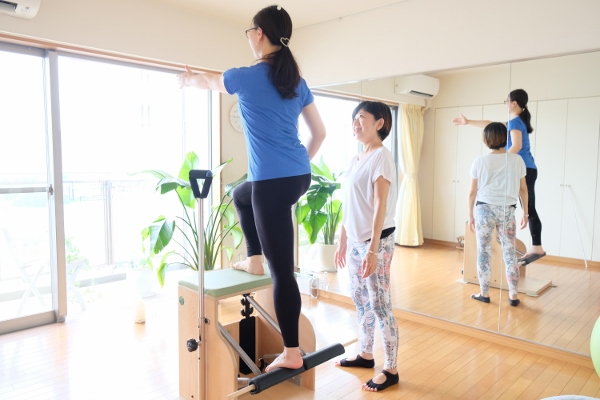 Though it may not look like much, it was more difficult than Ms. Nokko made it look!

“Pilates movements are so simple, anyone can do them. The difficulty comes from doing them correctly, with deep awareness of your limbs, which muscles you are using, and most importantly, breathing properly and in time with the movements!”

With so much to keep track of, the most basic movements are enough to engage and challenge you both mentally and physically. 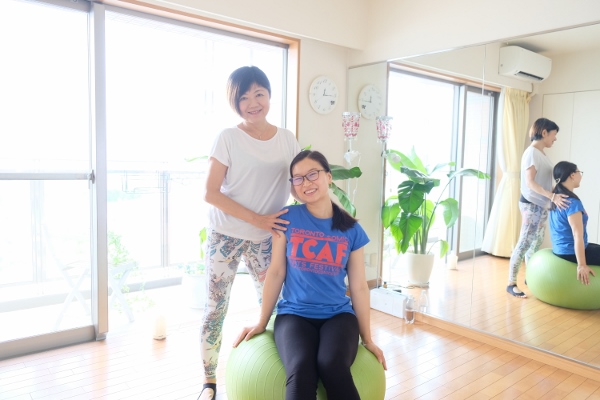 Before I knew it, our session was up! I was warm but not sweating profusely, and able to indulge in the feel-good rush of having exercised without being out of breath or feeling any muscle pain. 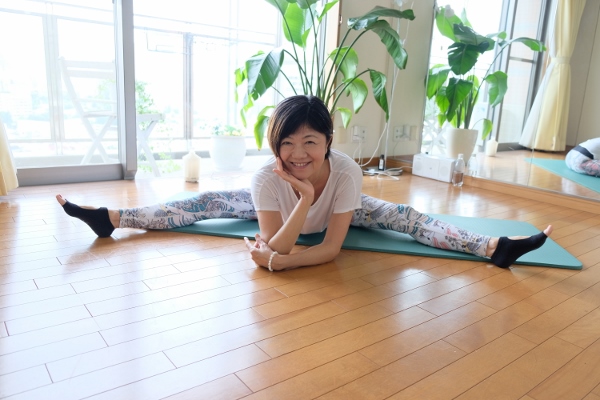 One thing I took away from the session is how accessible Pilates is. It doesn’t take up a lot of space, isn’t painful, and can be tailored to fit an individual’s level of fitness very easily. Ms. Nokko herself fell in love with how great Pilates made her feel and have been practicing it for some dozen years (ever since it came to Japan), leading her to open the studio despite having had a successful career in sports coaching and training at some very prominent gyms.

“I think a private studio is ideal for many people because it allows lessons to be personalized,” she said. “Some people come once a week, others more often and others less, but many people definitely get hooked after the first session and want to continue. It then becomes very important that I’m able to tailor what I teach to their needs.” 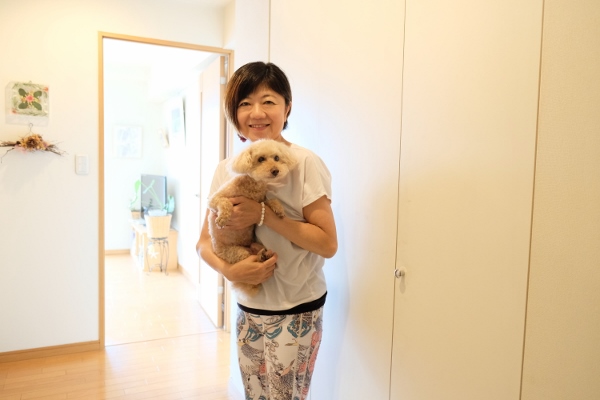 Sessions at Nokko Studio are 6,000 yen per 60 minutes (5,000 yen for your first lesson), with discount packages available upon inquiry.

If you’re looking for an easy-to-start exercise with an experienced instructor at your side, why not give Pilates a go at Nokko Studio? Ms. Nokko and Milly will be more than happy to welcome you to the world of Pilates!