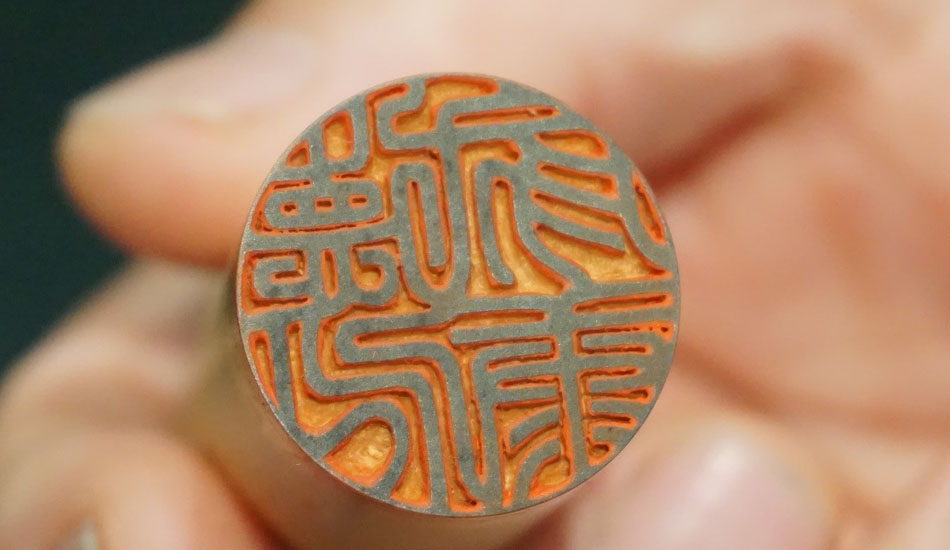 Next To Your Life, The Most Important Thing Is Your Seal

Close to Monzen-nakacho Station is Inkan no Dendo Tensho, a shop which sells Japanese seals (inkan). These small intricate works of art are still used in people’s everyday life in Japan, despite the advent of digitalisation and online technology. The shop is owned by Mr. Masanori Murota who, after serving an apprenticeship of three years, set up shop in Monzen-nakacho in 1973, and has been carving and selling seals ever since. 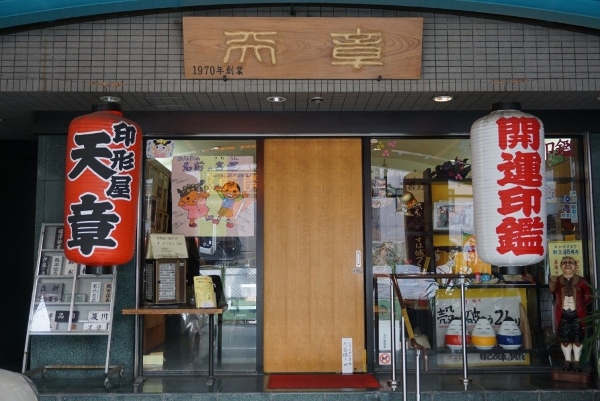 The seals are used for many aspects of daily life, such as house purchases, bank transactions or signing official or work documents, with different seals being used for different specific occasions. Sitting us down at a glass display counter, Mr. Murota pulled out trays of differently sized seals and proceeded to give us a detailed account of the types and their various uses. 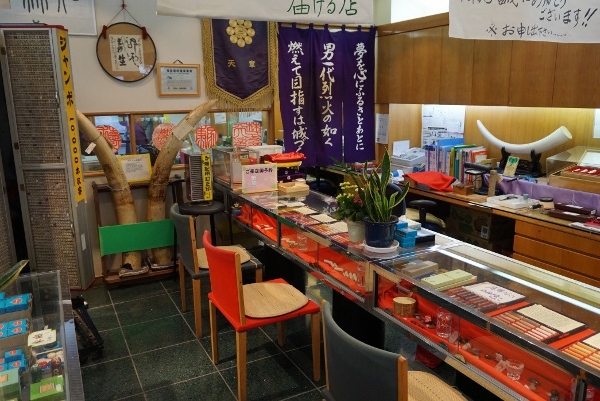 The seals are fashioned from tsuge (boxwood), suigyu (water buffalo horn) and zoge (ivory), and are priced from around 5,000 yen. They generally come in three sizes, depending on their function―jitsu-in (registered seal), ginko-in (bank seal) and mitome-in (personal seal), with the individual kanji being carved onto the head of the seal cylinder according to the customer’s choice. 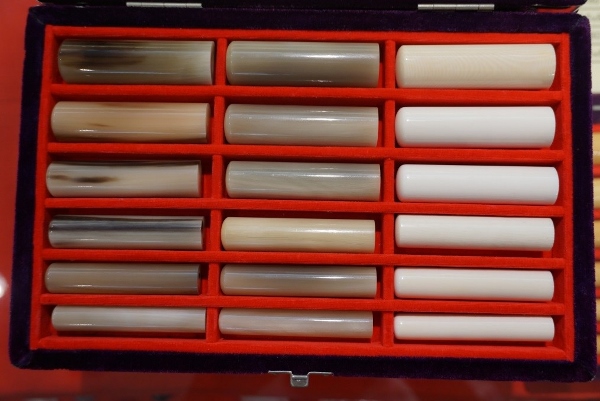 To illustrate the complexity which goes into the design of a seal, Mr. Murota showed us one with the name of Tokugawa Ieyasu, the first Tokugawa shogun, carved into it. The work which goes into carving the intricate design incorporating an individual’s or company’s name, is amazing. Sitting in the shop trying to decipher the individual kanji on the head of the seal, I began to appreciate the work that goes into producing one. 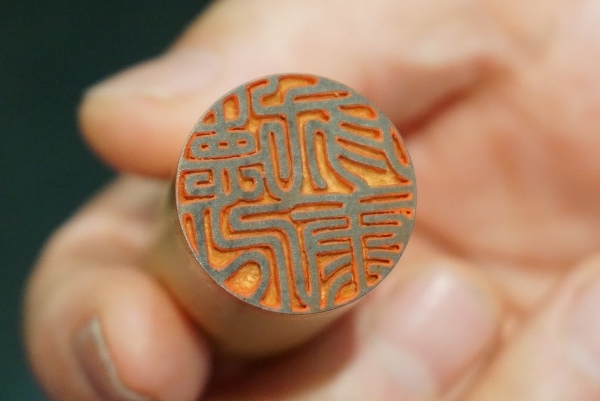 The seals are carved either in the shop or offsite and, depending on the complexity of the design, can take anywhere between one week and one month to complete. As Mr. Murota pointed out, what makes the whole process even more difficult is that the seal has to be carved in reverse on the head of the cylinder; and in the case of ivory, you can’t afford to make any mistakes when dealing with such precious raw material. 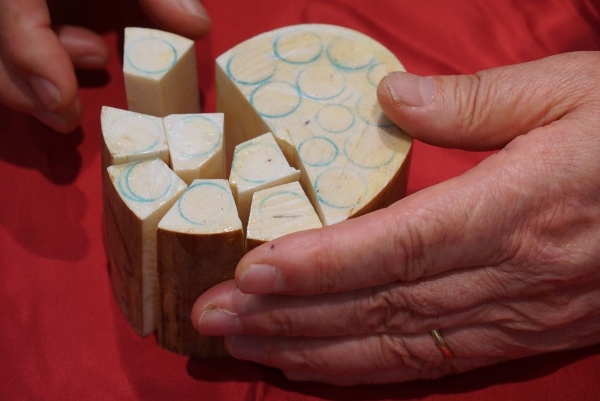 Since the international prohibition of trade in ivory, seal makers have relied on using existing stocks, which are tightly controlled, and which will not be replenished when they have been exhausted. After that time seals will have to be carved from tsuge, suigyu and synthetic material.
Tensho’s speciality is “Engi no yoi” (auspicious) seals. Mr. Murota and his staff will check the number of strokes that make up a customer’s name in kanji and advise whether the total number of strokes signifies a favourable omen or not. The kanji is carved in such a way as to fill the crown of the seal with strength so that it looks as though it wants to overflow from this small space. Depending on the function of the seal, the choice of design is intended to encourage a full life, or bring financial success to the holder of the seal. 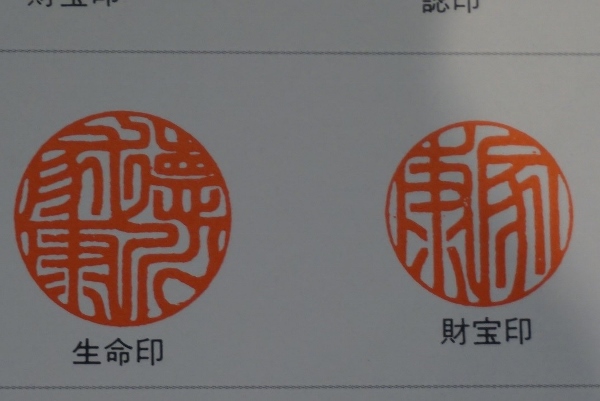 If you fancy having your own seal, why not select kanji of your own choosing, or katakana, or letters of the alphabet (up to 10 figures) and discuss with Mr. Murota and his staff whether they can arrange to have a seal carved for you. 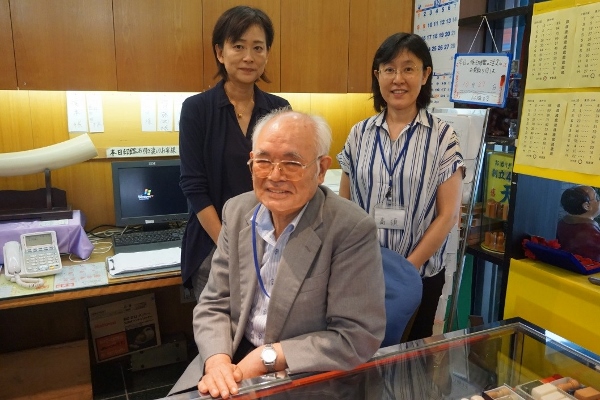 Having your own seal creates a unique memento of your time in Japan and, if registered, also serves as an alternative to a signature on documents. It provides a nice opportunity to combine an everyday tool with an exquisite work of art. As Mr. Murota says, “inochi no tsugi ni jitsu-in” (“the most important thing next to your life is your seal”). 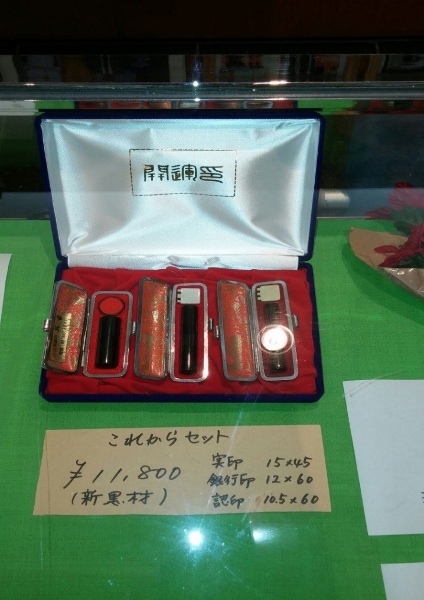