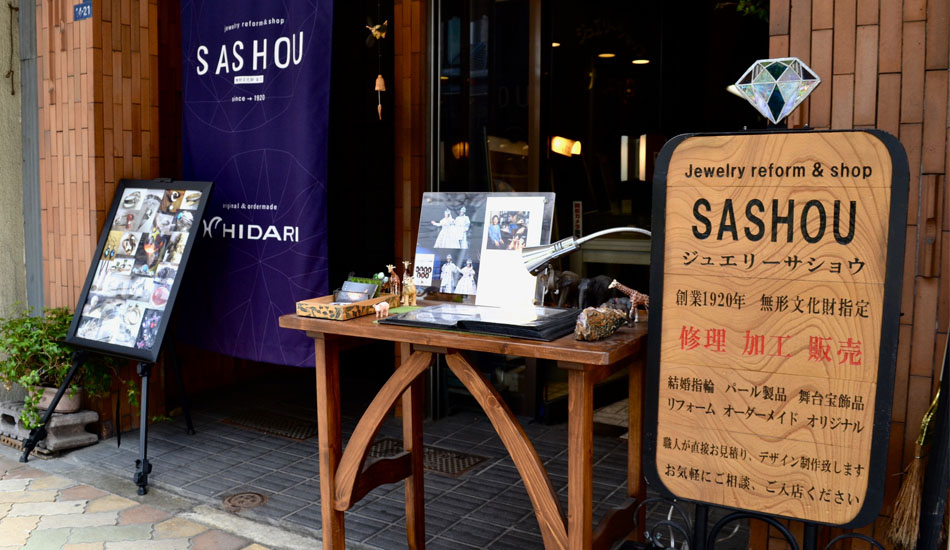 Protecting the Past and Designing for the Future: Sashou Metalworks

At first glance, Sashou looks like any other high-end jewelry store. In the front, they have beautiful rings, intricate necklaces, and delicate, finely made earrings. After entering the shop, however, a few things become clear about Sashou’s uniqueness. 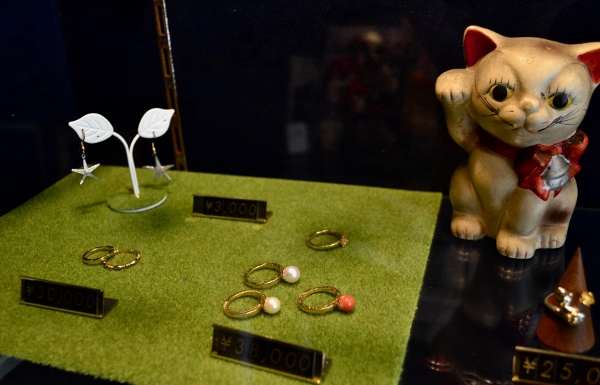 Sashou specializes not in selling jewelry, but in metalwork—a rapidly shrinking industry even in the more traditional Shitamachi area. The family not only makes original pieces, but also does repairs and takes commissions for department stores and popular theater groups such as Takarazuka. In the front of the store, there is a poster featuring a crown made for the theater group designed in the style of the Napoleonic era. From the picture of the ornate crown, it’s hard to imagine that it only took three days to make, but that attests to the artistry of the family and their dedicated work ethic.

Akiyoshi learned the trade from his parents, and then passed it on to his son. When I visited the store, Shinichi’s wife had just had a son of her own, and he joked as he showed me the baby’s picture that I might be looking at the next generation metalworker at Sashou. 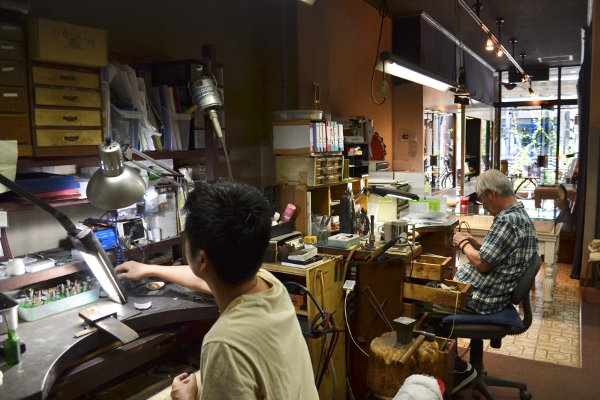 The pieces in the shop reflect this span of generations—alongside contemporary wedding rings, simple and graceful, are hairpins in traditional styles made by Akiyoshi’s parents, as well as brooches and belt pins featuring religious iconography that you’d be hard-pressed to find in your typical modern jewelry store. 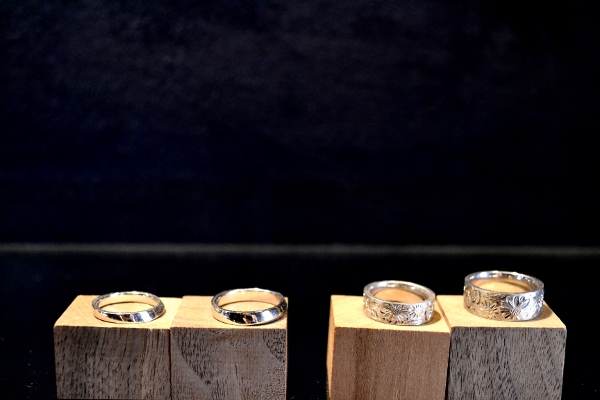 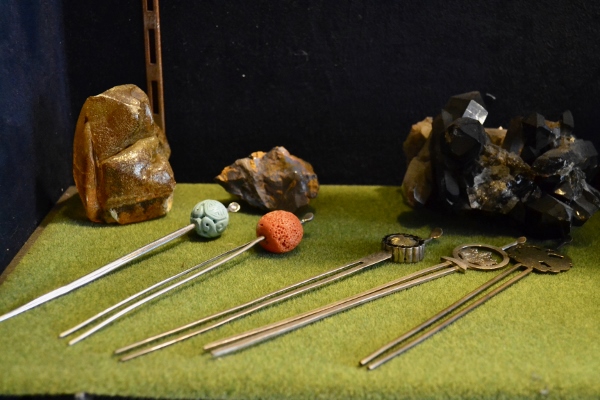 While most of the pieces have prices on par with shops in Ginza, making a purchase at Sashou’s more of a special occasion than an everyday possibility, their repair service allows them to maintain a close relationship with customers. 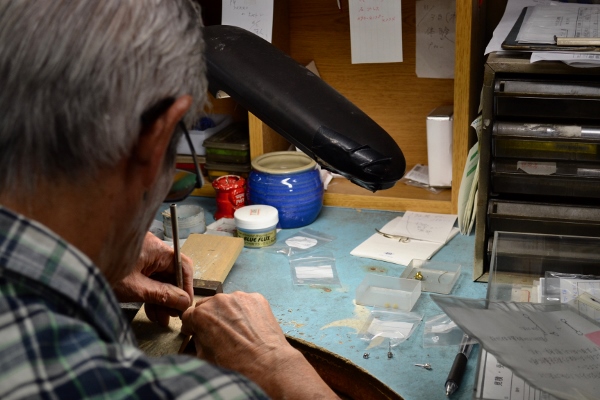 When I walked in, Shinichi was working on two repairs. For the first, he melted down a platinum ring, which a customer wanted remade in a new design. To watch Shinichi and Akiyoshi work is, quite literally, dazzling. We had to wear sunglasses to look at the platinum because the light the metal gives off is equivalent to staring into the sun. Watching the band heat to a white hot glow and melt down into a quivering bubble of liquid metal felt like witnessing nothing short of actual magic. 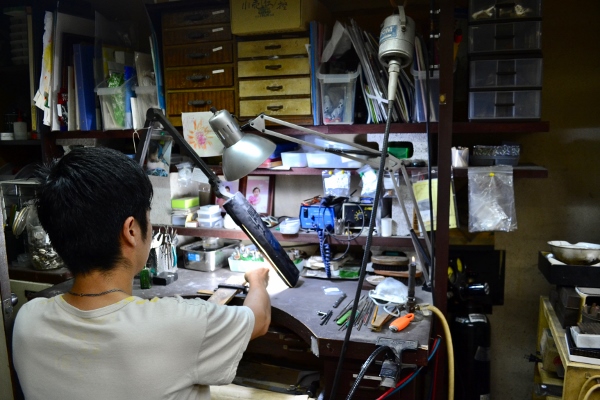 The second repair belonged to a customer who had worn a precious pendant to an onsen, which had caused the large stone in the center to turn an alarming shade of red. According to Shinichi, the customer was quite embarrassed to have done this, but trusted Sashou to restore her pendant–sanding down the stone until its original color came through again.

You could say, then, that Sasho is both in the business of creating new memories with their stunning original designs, as well as repairing old ones. Jewelry can be one of the most intimate and important things a person owns, and putting your memories and love of a piece in good hands is absolutely vital. Watching the father and son work, I felt sure that, should any of the jewelry passed on to me by my mother or grandmother ever needed repairing, I would know exactly where to bring it. 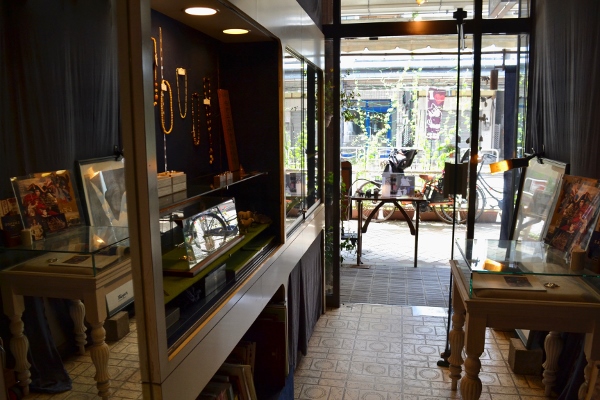 With such variety to choose from, I asked Shinichi what he would recommend to a foreign visitor coming to his shop. Evidently foreigners often come by and look around but, overwhelmed by the selection, usually leave without making a purchase. Shinichi recommended the small, detailed pendants I had initially overlooked when I walked in. 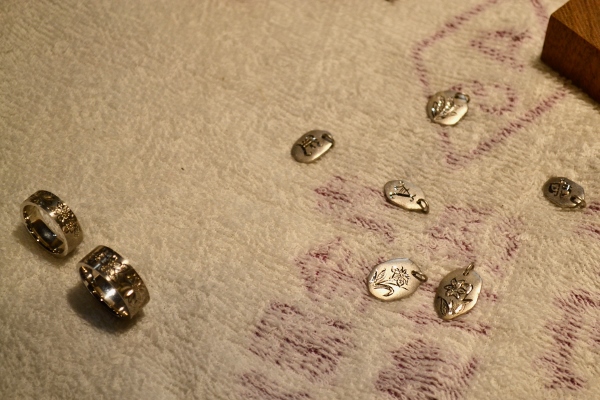 According to Japanese tradition, there is a flower for each month of the year, just as we often buy jewelry with our birthstones in the West. Shinichi and his father can engrave a silver pendant with the flower of a customer’s birthday on request, giving the customer a small piece of Japan that also has a personal connection to take home with them. Looking at the flower for my birth month—the chrysanthemum—I was very tempted to buy one then and there, but perhaps I’ll save it for when I one day leave Japan, to bring a very small piece of Shitamachi with me wherever I go. 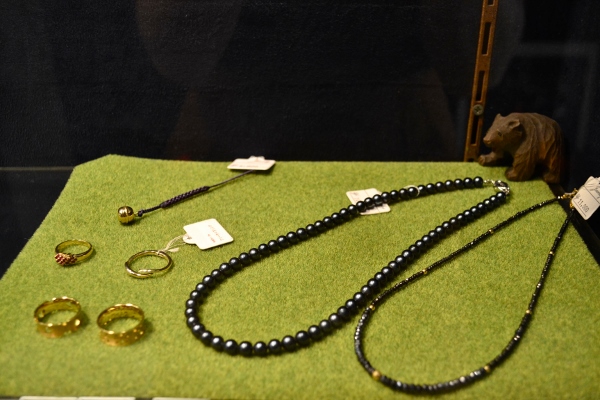