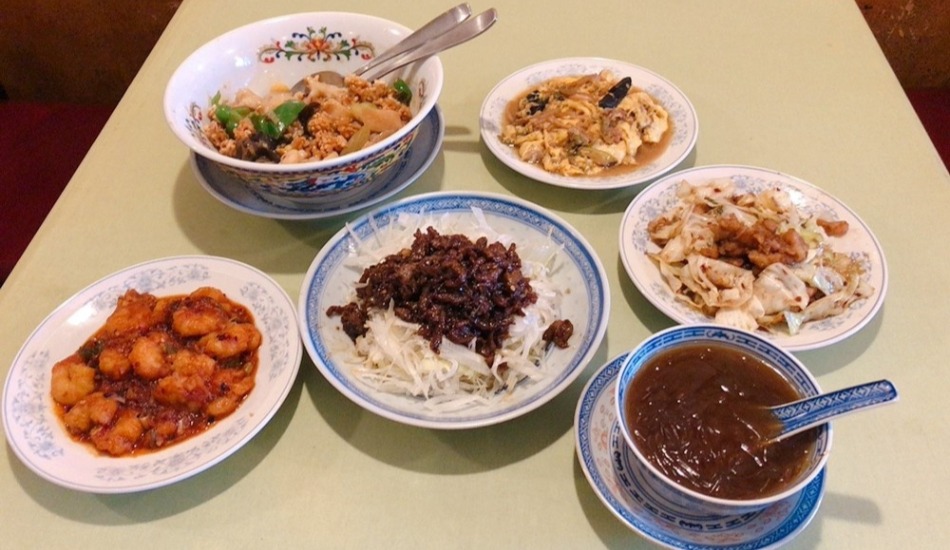 Kiryuhanten is a long-established Chinese restaurant on Shin-ohashi Street between Ojima and Higashi-ojima stations on the Shinjuku line. On a recent afternoon we dropped in for a chat with the owner chef Mr. Toshio Kurosawa and his charming wife. 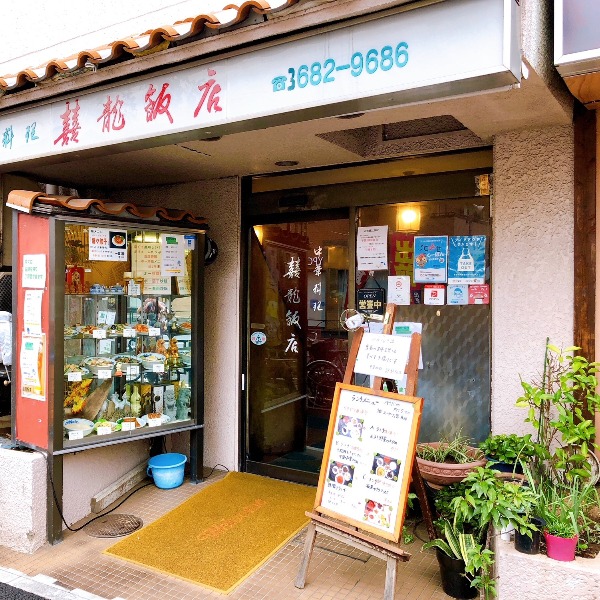 “I started my career by joining a very famous Ginza-based Chinese restaurant group in 1964,” explained Mr. Kurosawa. “I started at the bottom but was fortunate enough to be selected for training in China, where I spent time studying and observing in Beijing and Guangzhou. There were no translators in those days, so we had to communicate as best we could with a memo pad and pen. Later on, I spent two months working at the famous Tai Pak floating restaurant in Hong Kong, where I cooked and also acted as a translator for Japanese customers.” 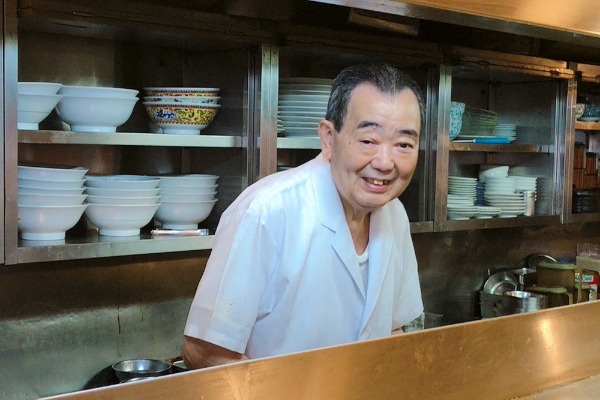 “Back in Tokyo, I worked my way up to become head chef at the main restaurant in Ginza. There was a change at the very top of the company, so I decided it was time I spread my wings and became independent. We found this location and opened Kiryuhanten in 1984. My home town is Kiryu in Gunma Prefecture; the written characters for my birthplace are different but the pronunciation is the same. The characters in the restaurant’s name mean congratulations and dragon, with the dragon character representing good luck. It was my father’s suggestion.” 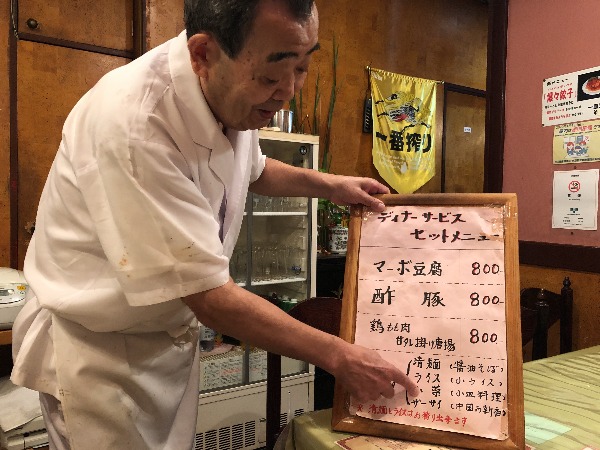 “Basically, we make Japanese-style Chinese (Chuuka) food with an emphasis on Guangdong cuisine. There are 72 items on the menu, plus specials and extras, which makes a total of around 100, I think. Lunchtime is from 11am to 5pm. When we opened back in the early 1980s, this area was mainly one of small factories where people worked hard and couldn’t take a regular lunch break at the same time every day. Many workers asked us to extend lunch hour, so we did; times have changed and those factories have been replaced by offices and apartment buildings but we’ve maintained the old opening hours.” 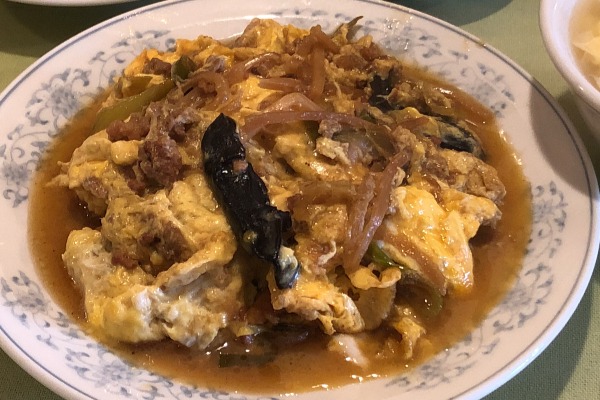 The lunch menu featured four sets. Mr. Kurosawa and his assistant chef disappeared behind the counter and within a couple of minutes, steaming plates of food were brought to the table. First up was this pork, egg, bamboo, and wood ear (kikurage) mushroom stir fry that hails originally from Shandong in China (mu su ro in Japanese). 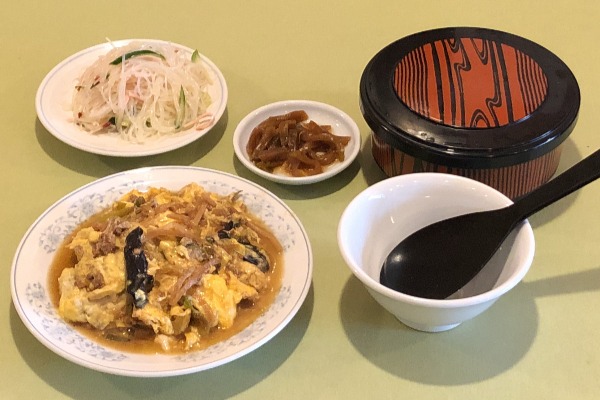 Costing a very reasonable 750 yen, it comes with rice, egg soup, and two side dishes, which today were vermicelli noodles and pickled mustard plant stem (zasai). Customers can enjoy a second serving of soup and rice for free. 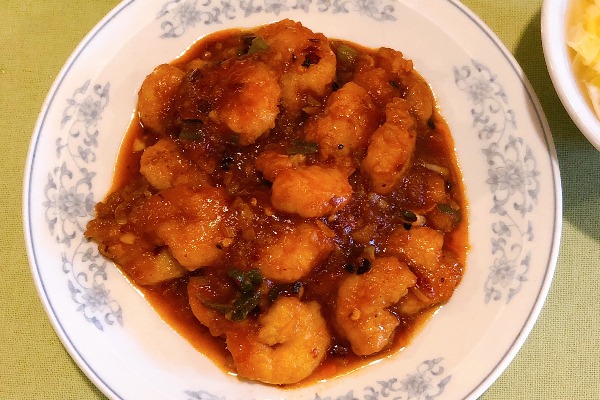 Next was that great favourite, shrimp in chili sauce. Plump, juicy shrimp in a piquant sauce, an absolute bargain at just 800 yen for the set. The accompanying side dishes vary from day to day. 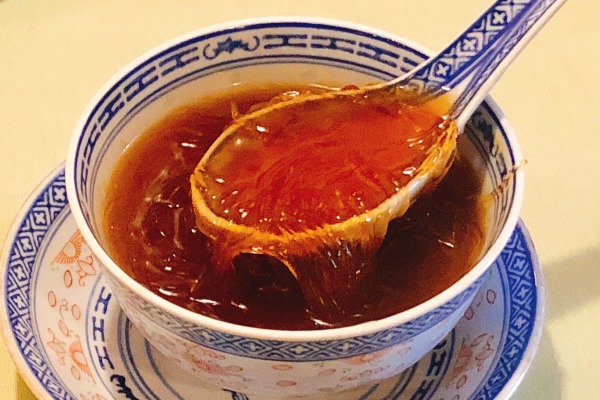 As if by magic, a bowl of shark fin soup appeared. There are four different varieties available: with mixed vegetables, egg, crab or steamed shark fin. The soup was rich, deeply savoury, and quite filling. 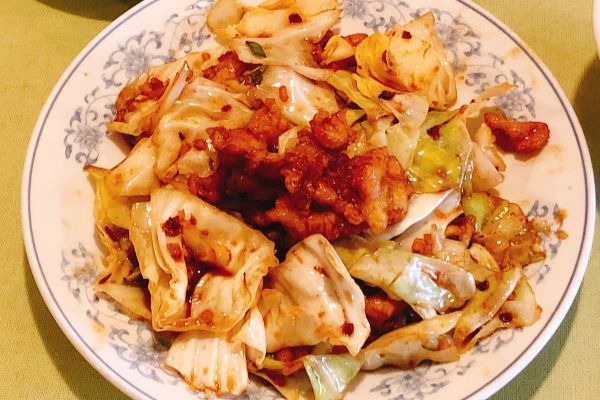 Alongside shrimp in chili sauce, twice-cooked pork (hoi ko ro in Japanese) is another classic Japanese-style Chinese dish. The pork bellies are simmered with a variety of spices and seasonings, then refrigerated, before being stir fried with vegetables, mainly cabbage, in a sauce of sweet bean paste amongst others. Very tasty and just 750 yen. 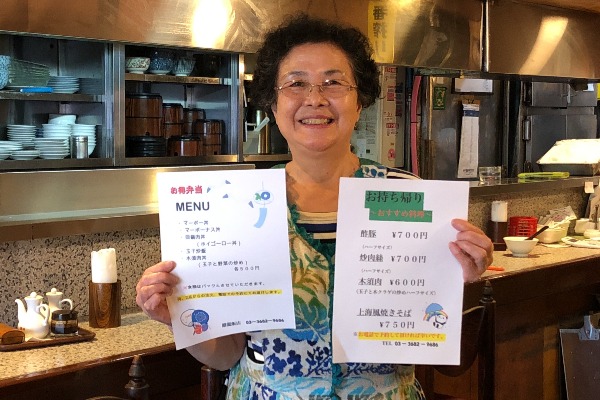 Mrs. Kurosawa drew our attention to the lunch boxes and best takeouts available right now at Kiryuhanten. On the lunchbox menu are spicy tofu on rice (mabo dofu), spicy eggplant on rice (mabo nasu), twice-cooked pork (hoi ko ro) on rice, egg fried rice and the egg, pork and vegetable stir fry on rice (ma su ro). All are 500 yen apiece, which is an incredible price. On the takeout recommended list are sweet and sour pork (700 yen), shredded pork (700 yen), egg, pork and vegetables stir fry (600 yen) and Shanghai fried noodles at 750 yen. The first three on the list are all half sizes. 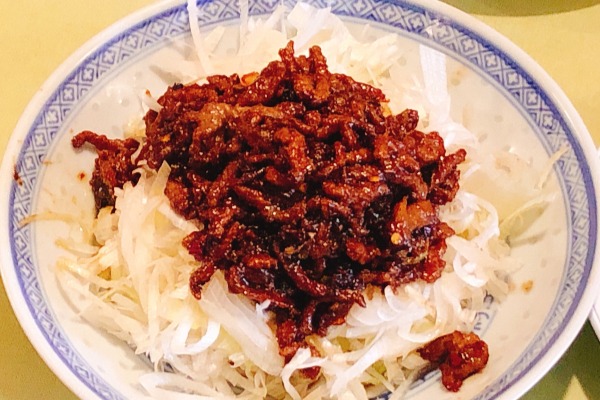 While Mrs. Kurosawa was explaining the lunch box menu, her husband showed his ingenuity by producing a marvellous dish from his special menu. This is beef marinated in a secret mix of fermented bean paste (miso) and variety of seasonings, then stir fried and served on a bed of finely sliced negi onions. The rich and deeply savoury beef contested superbly with the sharp and crispy onion. At 1,800 yen it’s one of the more expensive items on the menu but it’s delicious and highly recommended. 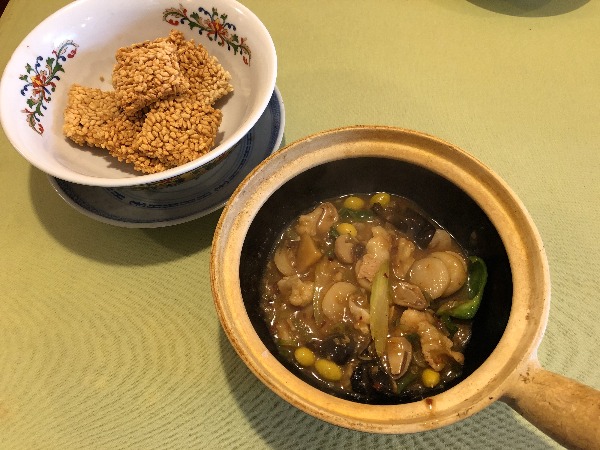 Another dish from the special menu is this scorched rice (okoge in Japanese). Cooked rice cakes are heated to phenomenal temperatures and placed into a large donburi bowl. 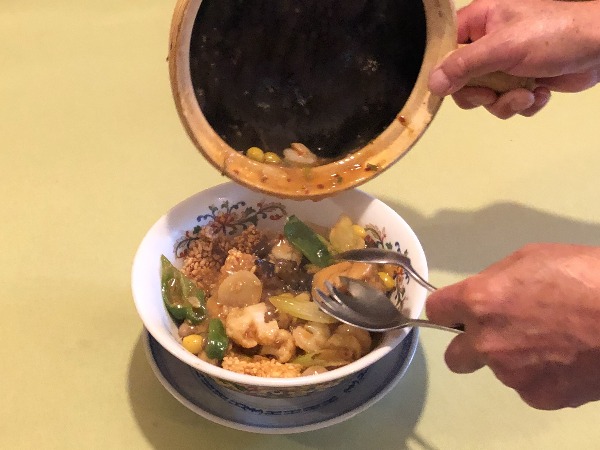 Then, a stir-fried mixture of premium seafood, meat and vegetables in a thick sauce, also incredibly hot, is tipped onto the rice and the mixture is quickly stirred together, creating a sizzling, crackling mass that billows clouds of steam. 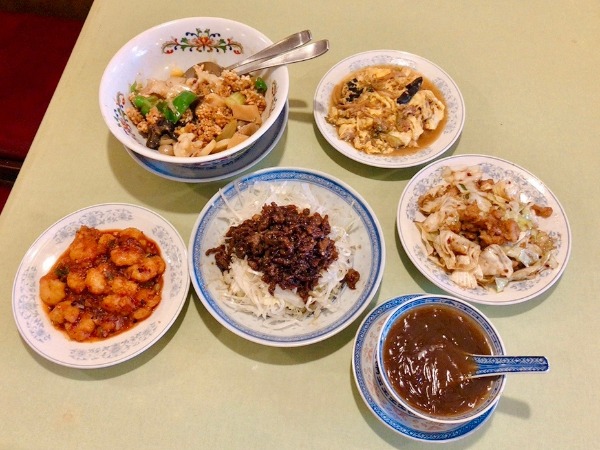 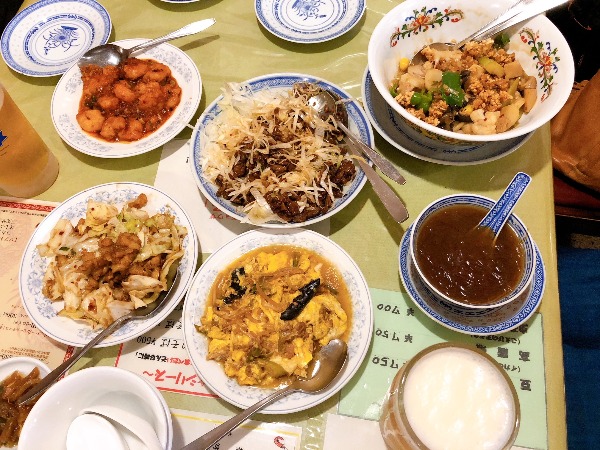 What better way to end the week than with a couple of beers and some great traditional Japanese-style Chinese food. Mr. Kurosawa’s lifetime of experience produced a superb spread of fantastic quality. Cheers! 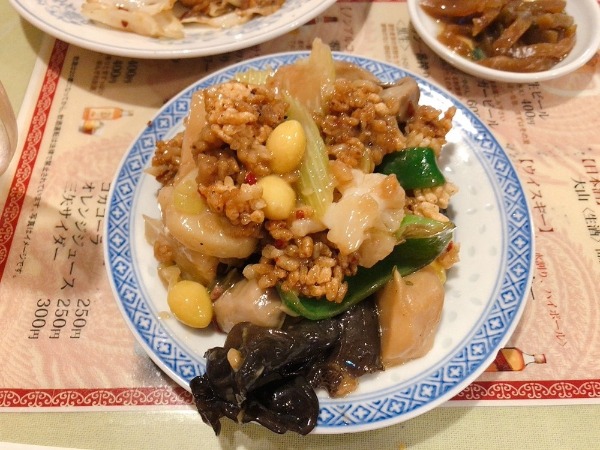 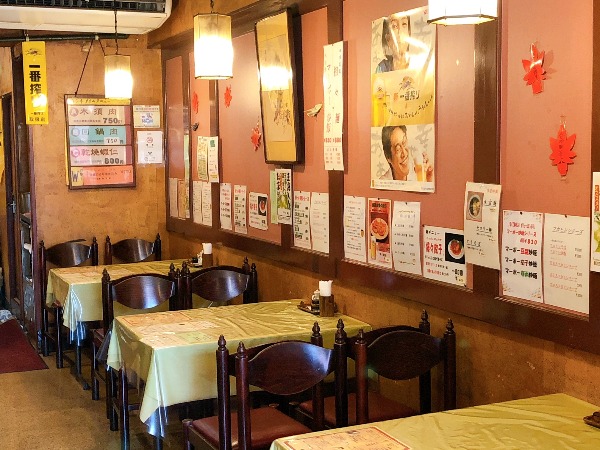 There’s a counter area with several seats and four-seater tables in the front. 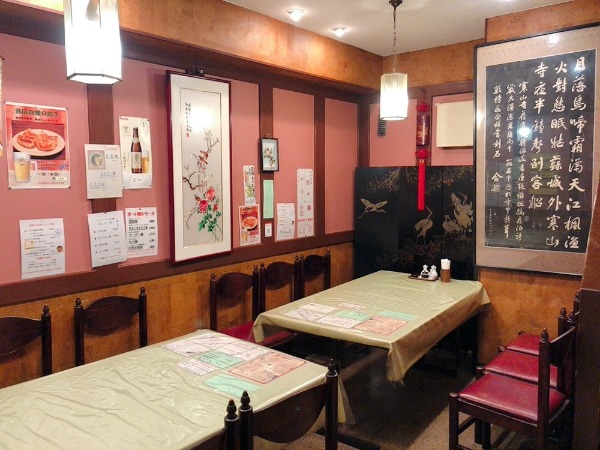 With a large, comfortably-appointed backroom for family dinners or parties. 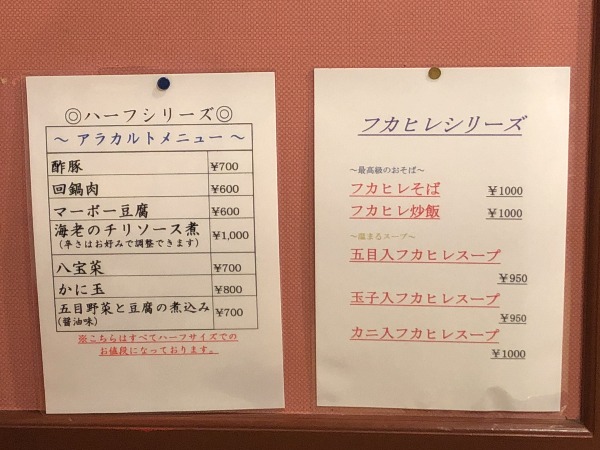 One interesting feature of Kiryuhanten is the “half size” series. For those who’d like to try a little of several dishes but don’t have a hearty appetite, smaller portions at slightly over half price are available. Sweet and sour pork (700 yen), twice-cooked pork (hoi ko ro 600 yen), mabo tofu (600 yen), chili shrimp (1,000 yen), egg, pork and vegetables (ma su ro 700 yen), crab omelette (kani tama 700 yen) and mixed vegetables simmered with tofu in a soy-based sauce (700 yen) are items on the half size menu. 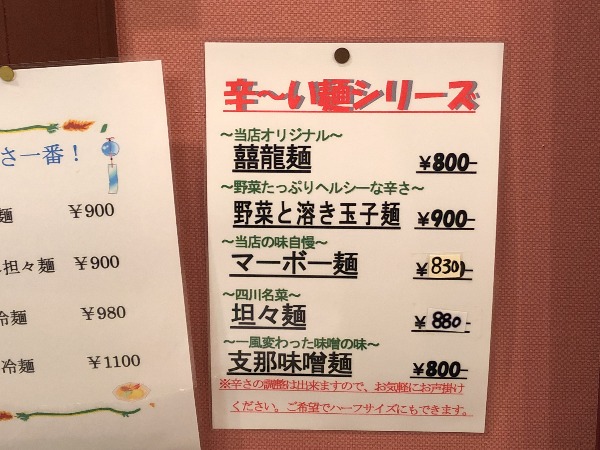 While for those who like it hot and spicy, there’s a series of noodle dishes. Kiryu original (900 yen), vegetable and egg (800 yen), mabo tofu noodles (830 yen), Szechuan-style tan tan noodles (880 yen) and Chinese miso noodles at 800 yen. Customers can ask Mr. Kurosawa to adjust the heat, according to their taste. Interestingly, he mentioned that many young Chinese visitors to Kiryuhanten ordered the ankake yakisoba, a Japanese original that combines pork, squid, scallops, and a variety of vegetables in a sauce thickened with potato starch and served on pan fried yakisoba noodles. It’s real comfort food.

If you’re in the Ojima area and hungry, just drop in to Kiryuhanten. The food is great and so is the beer!