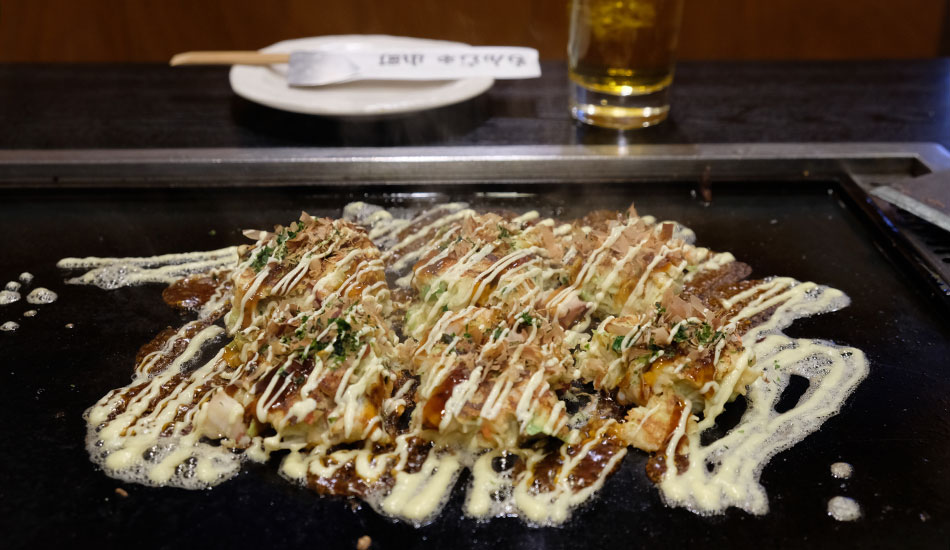 Magical Monja and Okonomiyaki in Kameido!

With the pandemic finally abating in Tokyo, people are heading out for dinner again, with old favourites such as hot plate restaurants one of the first ports of call. On a recent balmy autumn afternoon, we visited gourmet town Kameido, home of Monja Komachi Tokyo Kameido, a long-established okonomiyaki and monjayaki restaurant, for a chat with manager Mr. Takashi Sato. 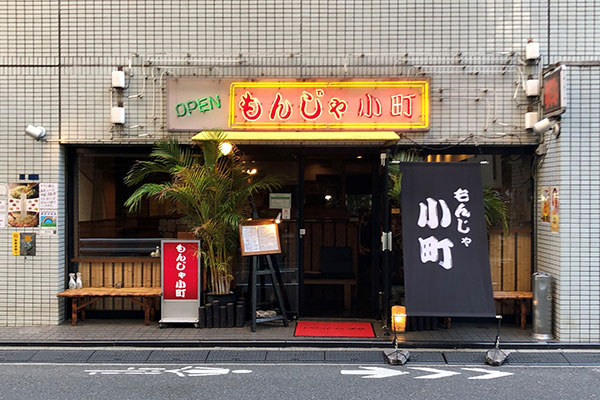 While just five minutes’ walk from the East exit of Kameido station, its location next to a tree-lined green-way gives Monja Komachi a quiet suburban feel. 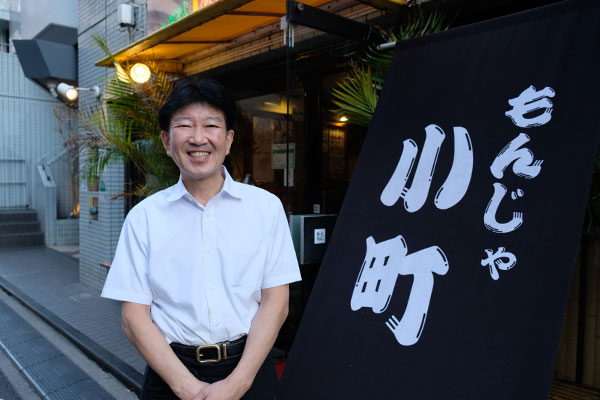 As Mr. Sato, a former banker, explained, “Our customers are largely local residents and businesspeople, especially families at the weekends. The two large business hotels just across the street had many foreign visitors in the past, hence our English language menu, but those numbers have dwindled recently.” Mr. Sato told how he’d really enjoyed working in a restaurant as a university student, and how his family supported his dream to open his own place. Monja Komachi has been feeding hungry folks in the Kameido area since 1999, so he clearly made the right career choice! 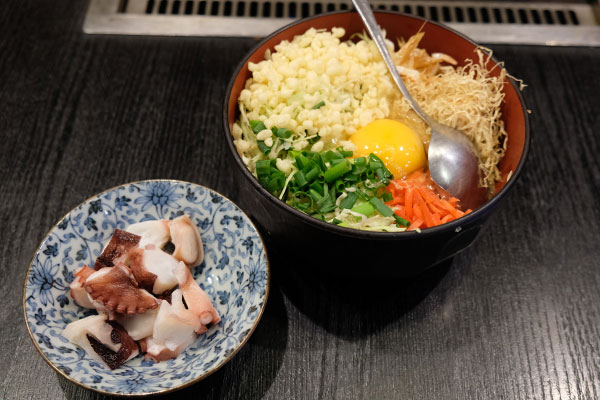 From the okonomiyaki menu he recommended this octopus, tempura nubbins, and egg okonomiyaki (tako tama ten, 1,232 yen for a regular size). The plump fresh octopus is of such quality that it could be served raw as sashimi; the same goes for all seafood at Monja Komachi. The beef short rib (calbi) meat served here is A5 rank as well. All vegetables are grown in Japan. Besides the octopus, the dish features cabbage, thinly sliced spring onions, sakura shrimp, sliced squid (kiri ika), tempura nubbins, red pickled ginger (beni shoga), and a raw egg. 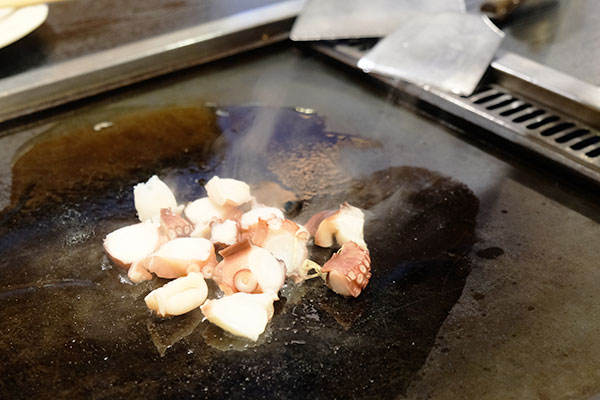 Mr. Sato begins by lightly cooking the octopus on the hot plate. 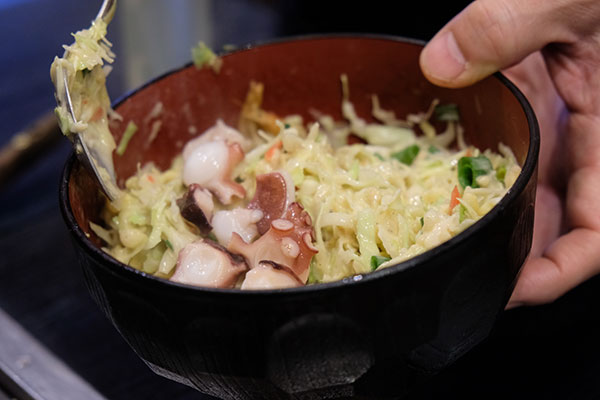 He then returns the octopus to the bowl of mixed ingredients and pours the whole lot onto the hot plate. 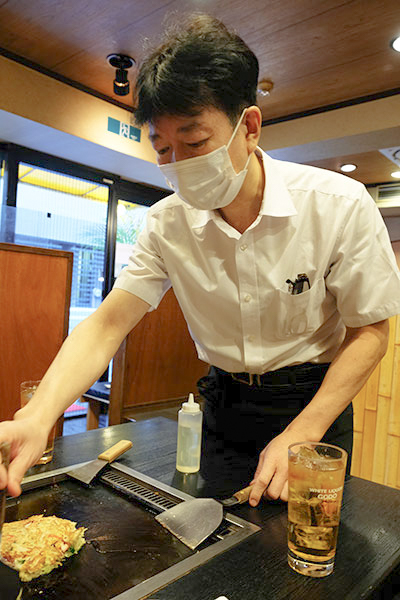 The key to making the perfect okonomiyaki lies in the broth and ingredients, together with finding the exact moment to flip the pancake. Mr. Sato’s technique with the steel spatulas used to cook the okonomiyaki is exceptionally deft. 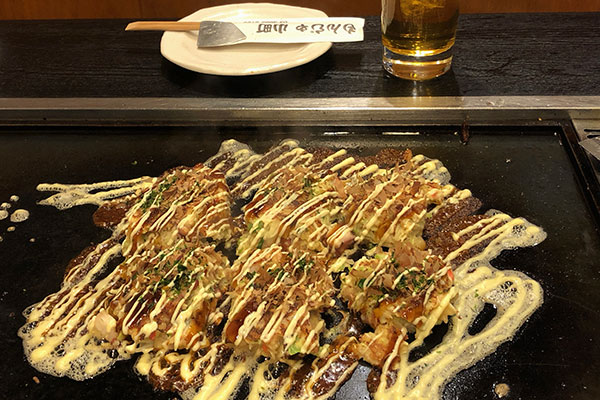 The pancake is then covered with mayonnaise and okonomiyaki sauce, a sweet and tangy concoction similar to the tonkatsu sauce eaten with pork cutlets. Finally it’s topped with aonori (green dried seaweed) and dried bonito flakes (katsuo bushi). Finished! 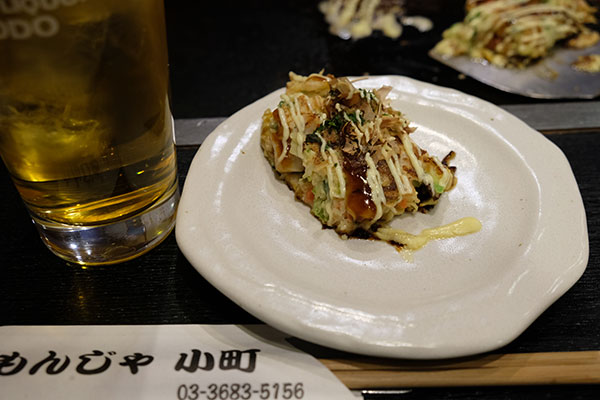 And it was extremely good indeed. “I’m very fussy about the ingredients,” said Mr. Sato. “The seafood all comes from the Toyosu market, specially selected by a vastly experienced broker we’ve been buying from for years.” 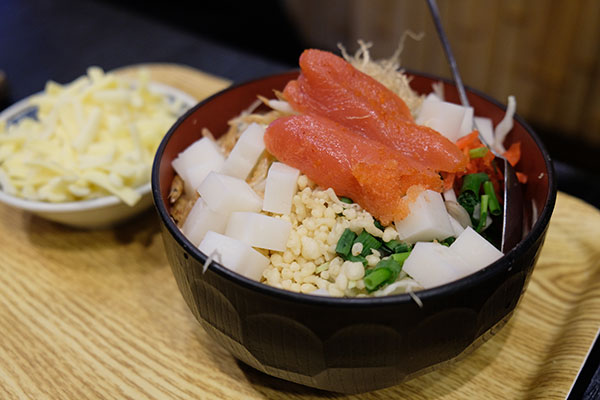 Moving onto monjayaki, this is the Shitamachi Monja (1,617 yen), the most popular on the menu. The basic ingredients are similar to the okonomiyaki, except for the bean sprouts (“They give it an extra crunchy texture,” explained Mr. Sato), diced mochi rice cakes, pollack roe (mentaiko) and cheese. “Both the cheese and the pollack roe contain salt so the broth we use is much milder,” he added. 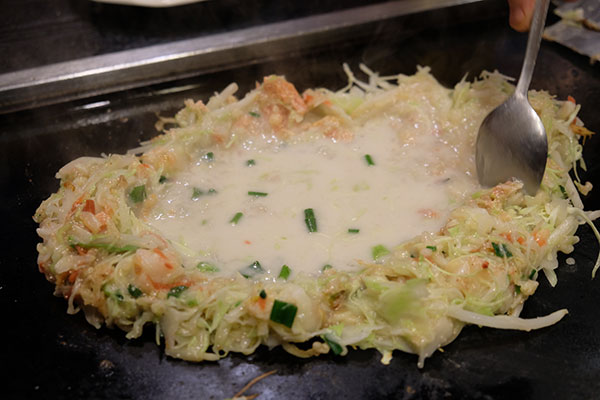 He cooked the monja mix on the hot plate, then chivvied it into the signature laguna shape, before filling the centre with the broth mix, being careful not to allow it to overflow. As the broth heated up, he deftly wielded the spatulas and the excess liquid bubbled away, leaving a piping hot, perfectly cooked monjayaki. 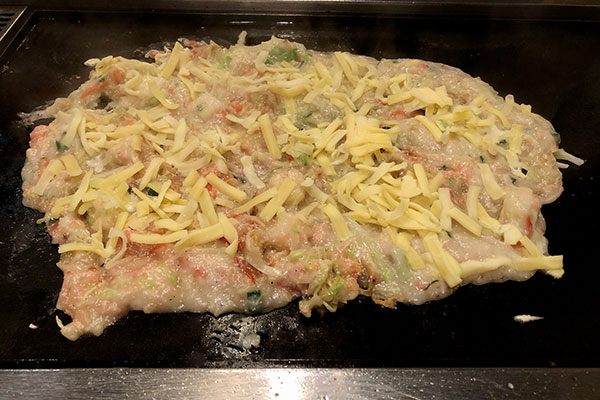 Finally he added some mixed cheese and after it began melting we dived it and started to eat. Unlike the okonomiyaki there’s no flipping the monja, and it has to be eaten fairly quickly while it’s still hot. As Mr. Sato explained, the initial taste was rich without being salty, but as time passed on the hotplate it became stronger in flavour. 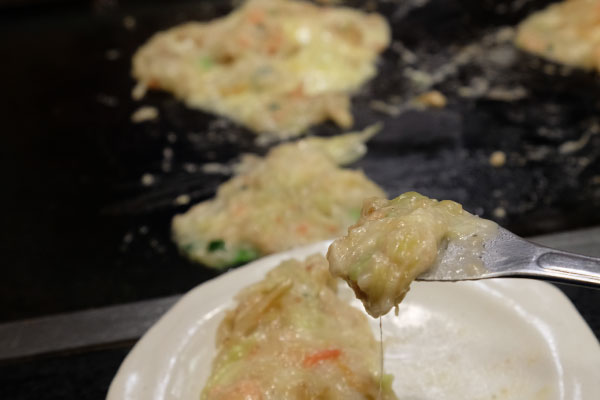 It was wonderful. The light but flavourful broth wasn’t overpowering, the melted cheese was stringy, the diced rice cake soft and chewy, while the pollack roe and red pickled ginger added sharp and spicy accents. It’s a savoury explosion! Beginners needn’t worry about cooking on the hotplates as Mr. Sato will always assist. 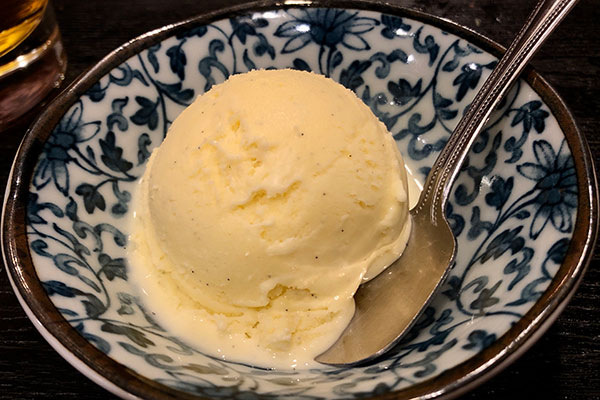 After the umami sensation of the okonomiyaki and monja, a bowl of sweet vanilla ice cream was the perfect dessert. 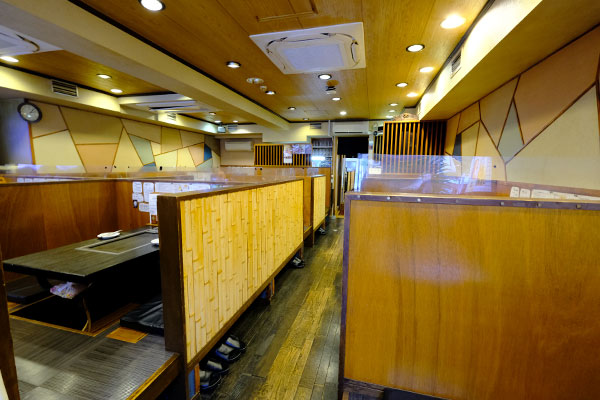 All pandemic prevention measures are firmly in place at Monja Komachi. Tables are separated from each other by wooden partitions, with semi-private chair seating, or floor seats on the dais that covers over half of the quite large restaurant. 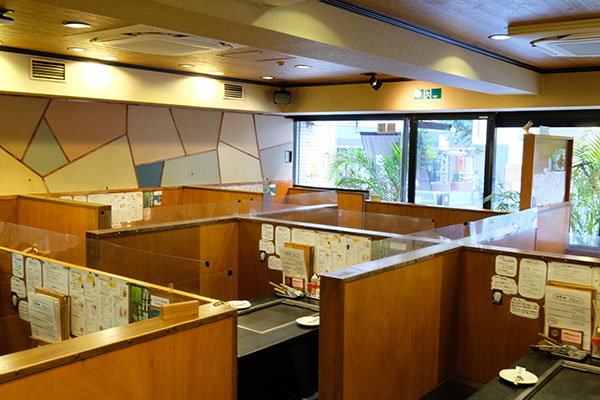 It’s a very comfortable place with a pleasant, relaxed atmosphere. The fish, meat and vegetables are extremely fresh and of such high quality that many customers have them as hors d’oeuvre with drinks before moving on to the main events of okonomiyaki and monja. It’s easy to understand why Monja Komachi Tokyo Kameido has become such a well-established destination for all generations of diners in Kameido. If you’re in the area why not drop in for some real downtown Tokyo soul food.