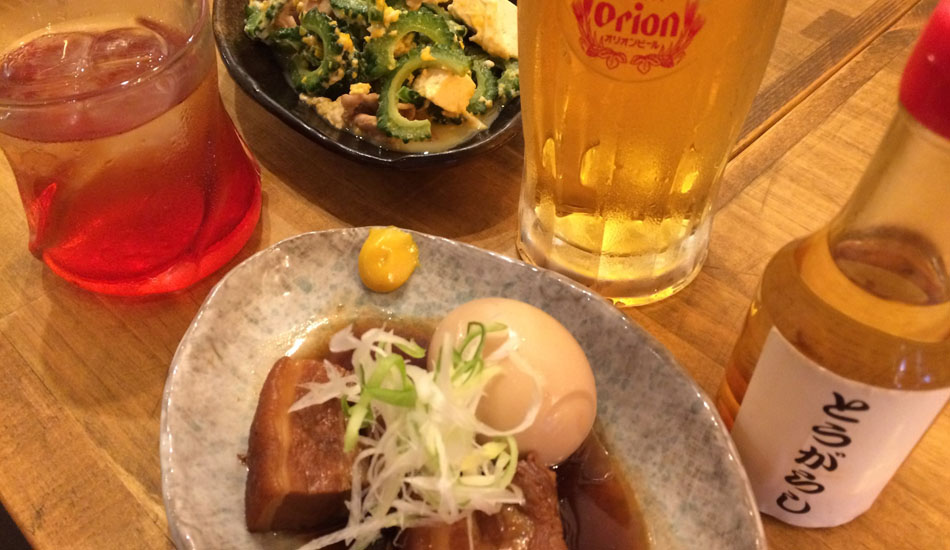 The Real Taste of Okinawa

Stepping into Hariku Yamaku, the Okinawan restaurant on Meiji-dori Avenue near Nishi-ojima Station, one is instantly transported 1500 kilometres south to Japan’s tropical paradise. The bouncy rhythms of Okinawan music, the dried grass curtain above the bar, the laid-back atmosphere and the brightly-coloured bottles of various sizes all combine to chase away the sweltering Tokyo summer day outside. This is island time! 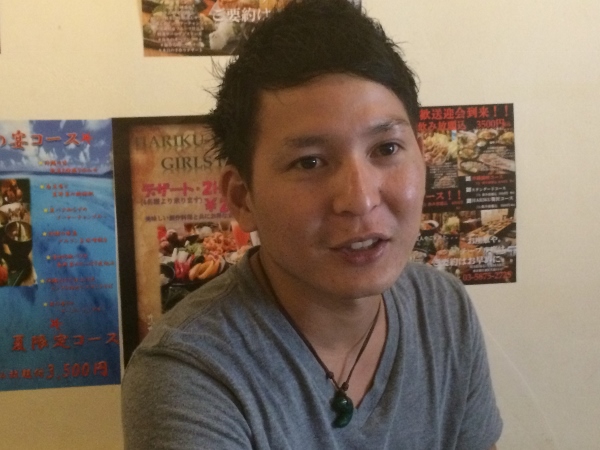 Kota Tokumine, the youthful proprietor, took a few minutes to discuss his birthplace, its food and culture. “Okinawan food is all about home cooking. Each house has its own unique way of making the same dishes and all are slightly different. It’s great pleasure to visit friends’ and relatives’ houses and enjoy their home cooking. When I first came to Tokyo I worked in the tourist industry as a bus guide. When people found out where I was from, they asked so many questions I had to start studying about the place to be able to answer all of them. That led me to want to promote the islands in some way. I knew a cook trained in Ryukyuan palace cuisine (Kyutei Ryori) so we planned and opened the restaurant together six years ago.” 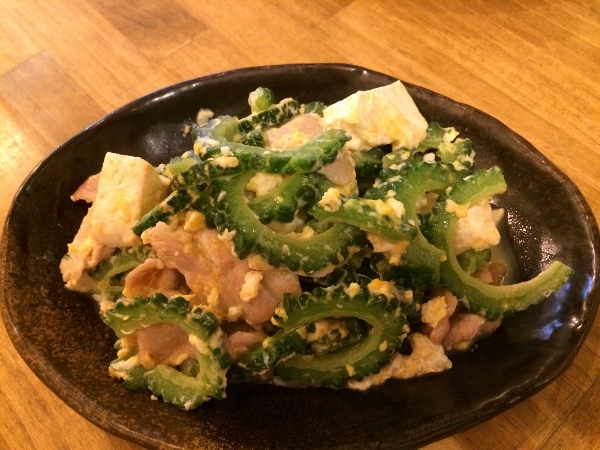 The most popular dishes at Hariku Yamaku are the staples of Goya Champuru, Rafute and Umibudo. Goya Champuru is perhaps the most well known dish from Okinawa, a stir-fry of goya (bitter melon), pork, egg and shima tofu (island tofu). “Our goya champuru contains only those ingredients and it’s heavy on the goya,” says Mr.Tokumine. ”The island tofu tends to be harder, saltier and has a richer, stronger flavor than other kinds.” 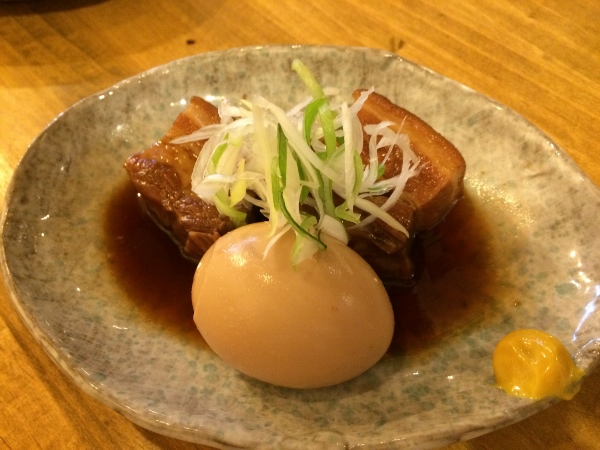 Rafute was originally served as part of palace cuisine but its popularity has spread far beyond its island home. It’s a dish of pork ribs with the skin left on and stewed for hours in a mix of soy sauce, awamori and black sugar. The black sugar and awamori impart a rich sweetness to the deliciously soft meat while the skin and fat become gelatinous, like collagen. Generally served with hard-boiled eggs cooked in the rafute sauce and a dab of fierce mustard, this really is a dish fit for royalty. 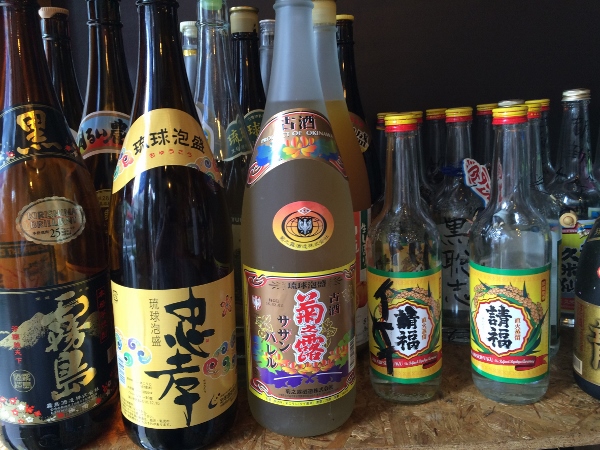 Awamori is a clear spirit distilled from rice using techniques that arrived from Thailand in the 15th century as part of the Ryukyu Kingdom’s extensive sea trade. The locals adapted the techniques to suit the subtropical climate and added the local black koji (the mold Aspergillus oryzae) for fermentation. All awamori is exclusively made from imported Thai indica rice. 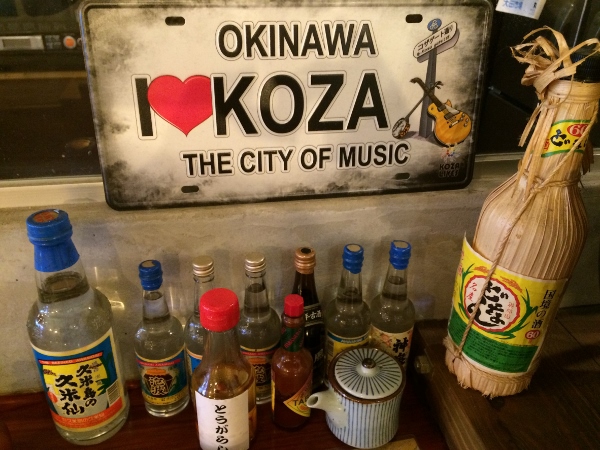 Such is the ubiquity of awamori in Okinawa that Mr. Tokumine was unsure what to order in a bar when he first arrived in Tokyo. ”Everybody drinks awamori mizuwari (diluted with water) in Okinawa. Awamori and Orion beer are the two preferred drinks, by far. It’s very strong so most people don’t take it straight. Okinawan people love to drink and talk, often all night, so they prefer drinks that are not too strong. Also, we’re a bit shy so having a few drinks allows us to relax.” 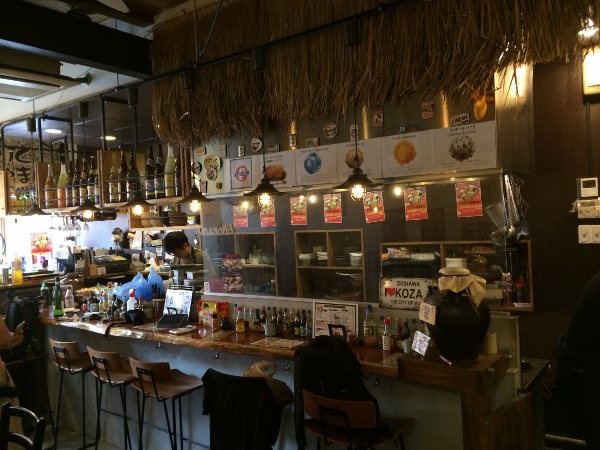 Noodles are a popular part of Okinawan cuisine, where they are known as Okinawa soba. Soba usually refers to buckwheat noodles but the Okinawan variety contains no buckwheat, being made entirely from wheat. “Many people have soba for lunch,” says Mr. Tokumine. “The soup and noodles are the same but the name is different depending on the main topping. Soki soba contains stewed spare ribs and beni shoga (pickled ginger). Other popular ingredients are boiled pig’s trotters and aosa, a variety of sea lettuce.” 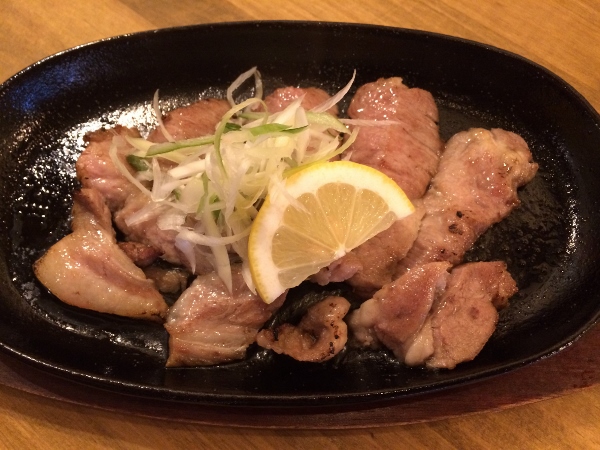 Umibudo (sea grapes) is a kind of edible seaweed that has little bubbles rather than leaves, hence the name. Despite being a mainstay of Okinawan restaurants all over Japan, Mr. Tokumine assures us they are far from universally eaten in Okinawa. “They’re from Southeast Asia really; Indonesia, Vietnam and Malaysia,” he says. What’s not in doubt is the quality and popularity of Agu pork, from the native black pig. The Agu pig is black, hairy and resembles a wild boar more than a domesticated pig. The meat is delicious: soft, highly marbled with sweet and richly flavoured fat. The Agu pork served at Hariku Yamaku is of very high quality. 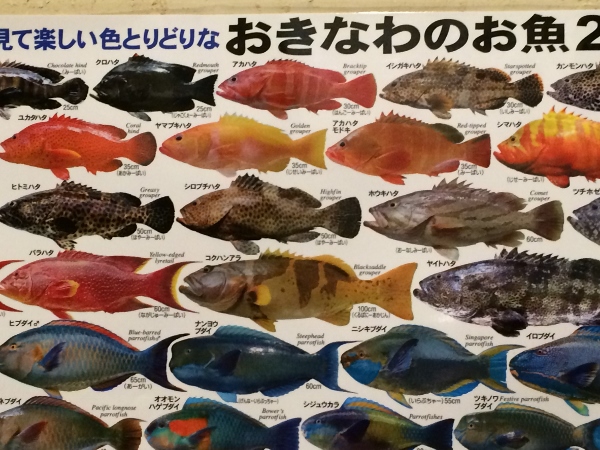 Pork in all its forms may be the most predominant ingredient in Okinawan cooking but fish play an important role as well. The emerald blue and splendidly named knobsnout parrotfish (aobudai), the marbled rockfish (kasago) and the chocolate hind (mibai) are all popular, appearing on the menu depending on their availability at the fish market. 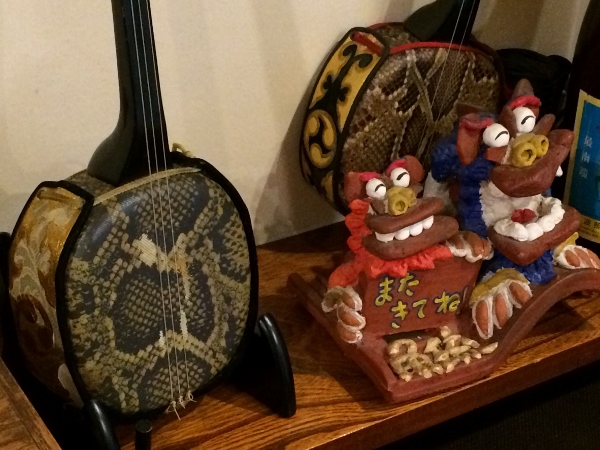 Mr. Tokumine and his hard-working staff create a warm and welcoming atmosphere in Hariku Yamaku. In the back room one can find some musical instruments including a sanshin, the three-stringed, snakeskin-covered Okinawan banjo, descended from the Chinese sanxian and precursor of the shamisen. The proprietor, apparently the possessor of a fine singing voice, occasionally strums a few tunes. 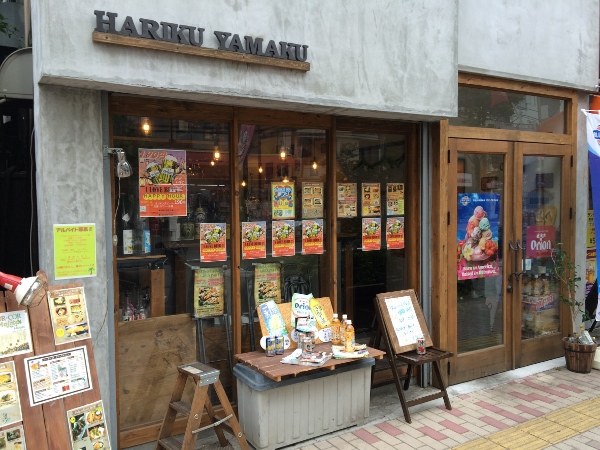 If you’ve never visited the balmy wonderland of Japan’s most southerly prefecture, the next best thing is an evening of food, drink and music at Hariku Yamaku. In Okinawan dialect the name means, “Come on in!” What are you waiting for? 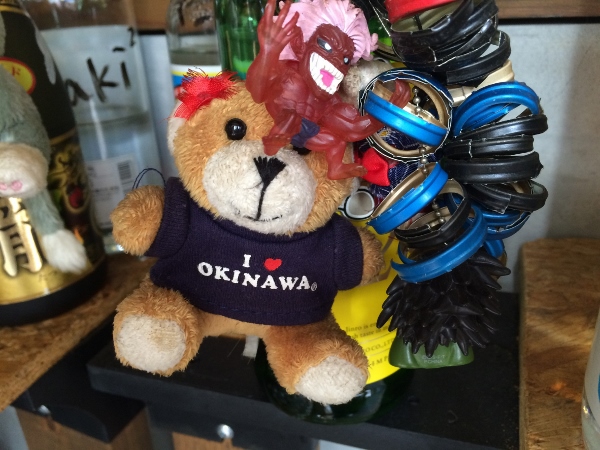 And if that weren’t enough to pique your interest, there’s a happy hour from 5pm to 7pm every evening. Orion draft beer and awamori sours are only 190 yen each. That’s value! 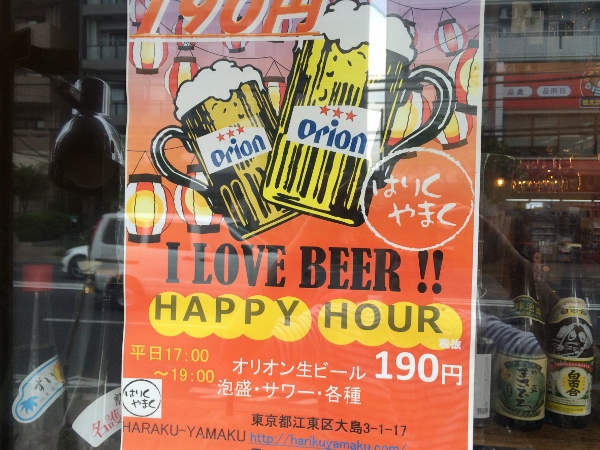 One free drink with a food order.