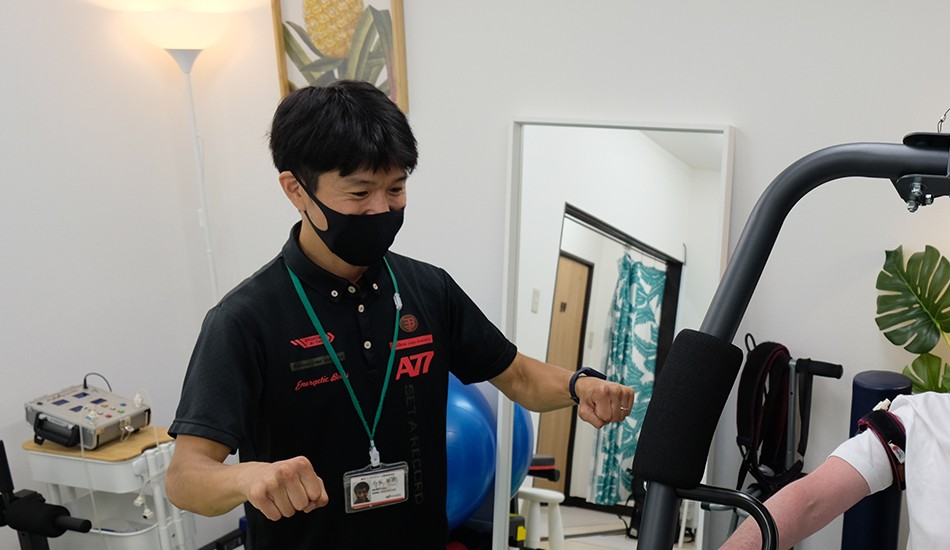 Kaatsu training is a system of exercise for building muscle, dieting, increasing stamina, and stimulating growth hormones that’s gained popularity in recent years. Roughly translating to “additional pressure” in English, kaatsu was initially developed by Dr. Yoshiaki Sato in Tokyo in the late 1960s, and has now expanded to 49 countries around the world. The newest kaatsu training centre in Koto-ku is Personal Kaatsu Training Ohana, a few minutes’ walk from Minami-sunamachi Station. On a recent afternoon, we dropped in for a chat with trainer Mr. Hiroki Kodama. 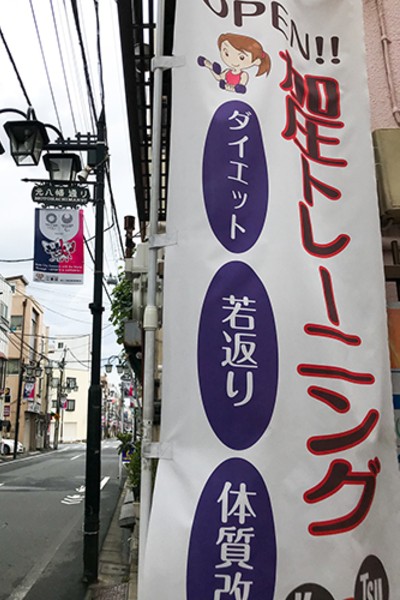 Located on Motohachiman street just 5 minutes’ walk from exit 2b of Minami-sunamachi Station, the centre is accessed by a path between two buildings on the right. There’s an easy to follow map on the Ohana website. The centre, which occupies the entirely remodeled and redecorated ground floor of a low-rise apartment building, is brand new. 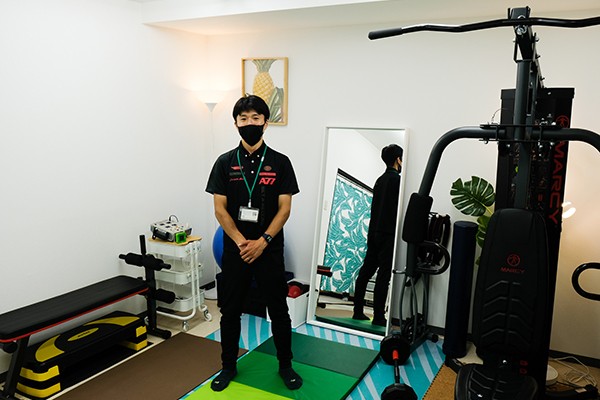 Trainer Mr. Kodama is as friendly and welcoming as he is glowing with health. How did he become interested in kaatsu training? “Well, I’ve always been blessed with extremely good health and I loved going to the gymnasium. For many years I worked as a salesman in a busy, high-pressure environment. Many of the other staff were excellent workers of a similar age but they frequently became sick; I began to wonder exactly why this should be. One day, the president of the company mentioned kaatsu training so I looked into it. I took a trial lesson, became fascinated by it, and began studying full-time. I gained my professional instructor’s licence in 2015.” 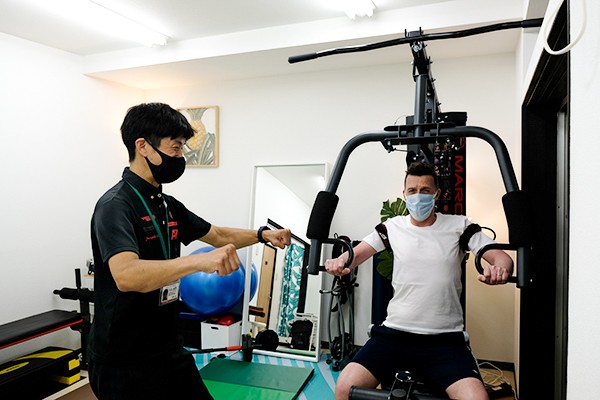 Born and raised just up the road in Kitasuna, Mr. Kodama works as a Kaatsu instructor in a sports club, and opened Ohana (the Hawaiian concept of extended family) in 2020.

So, how does the kaatsu training work? “When customers first come, they sit on the bench and we discuss their targets and what exactly they want to achieve. This includes not only their training programme but also other aspects such as diet and lifestyle. The kaatsu training itself works by restricting the blood flow around the body with pneumatic bands, then performing a series of low-intensity exercises,” Mr. Kodama explained. 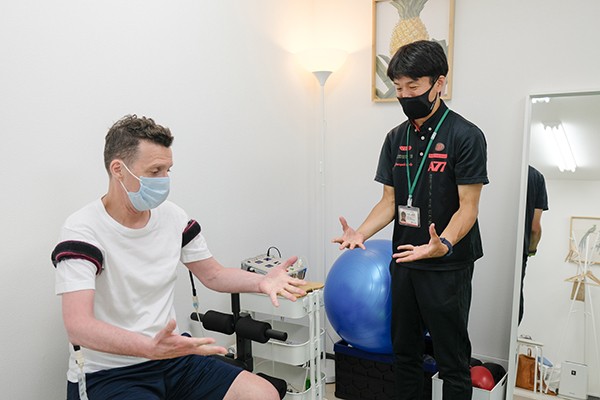 The pneumatic bands are fitted around the upper arms. Mr. Kodama then increases the pressure via the machine until they are tight and the blood supply is stopped. It’s a strange but not unpleasant feeling. Simply clenching the fists is an effective way to tone the muscles. 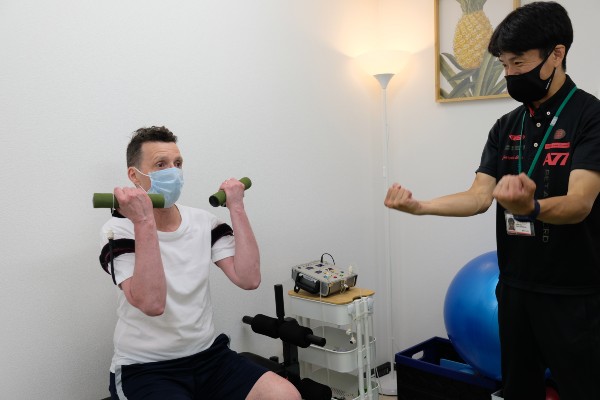 We move on to simple exercises with barbells. Kaatsu is also known as Blood Flow Restriction (BFR) and Occlusion Training in English. The bands slow down the flow of blood back to the heart, filling up all the blood vessels and stimulating the muscle fibres. This increases the creation of lactic acid, the usual effect of a heavy workout. In response the brain signals the pituitary gland to send growth hormones to the area, which then causes the muscles to grow. It’s very neat. 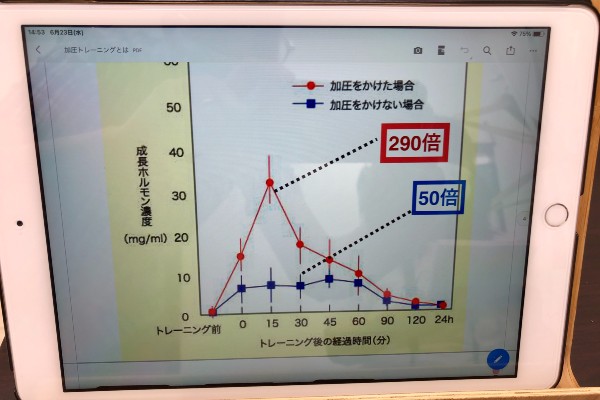 The barbells are only one kilo each and the exercises are simple, yet the effect is that of a heavy workout. Analysis of growth hormones in the blood after a workout shows how wearing the kaatsu bands leads to a near six times greater creation of growth hormones (red line) than without (blue line). 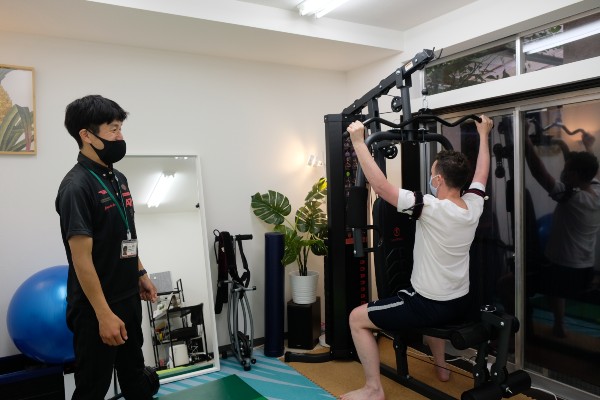 The only machine at Personal Kaatsu Training Ohana was specifically selected for use in kaatsu training. The lower body is also trained, with larger bands that fit around the upper thighs. Squats, buttock exercises and lunges are so effective that clients don’t need to use weights for their legs. “You use your own body weight,” explains Mr. Kodama. 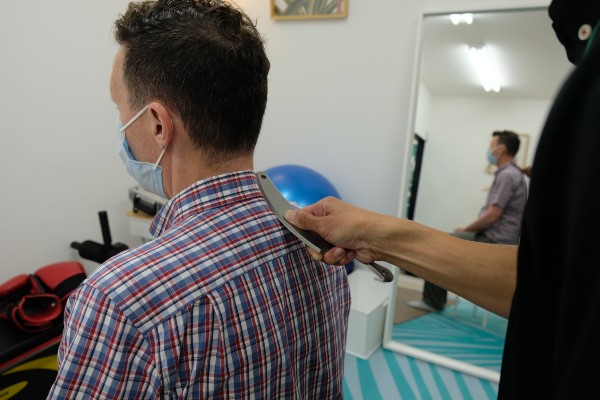 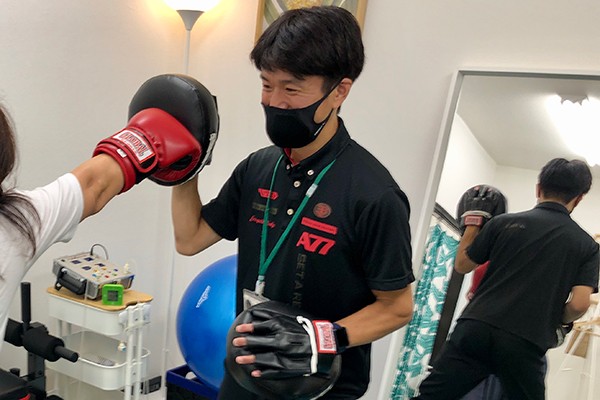 We then put on the gloves and get into some kickboxing to really get the blood flowing and relieve that stress. 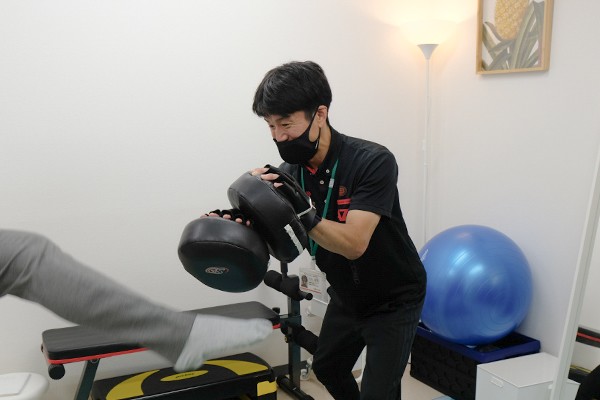 “Although most of my customers cite wanting to lose weight as their prime motivation, the training we offer can also improve posture, relieve lower back pain, and stiff shoulders, thus improving the quality of life in a way that is sustainable. It’s also great for anti-aging, boosting confidence and putting a spring in your step,” said Mr. Kodama. 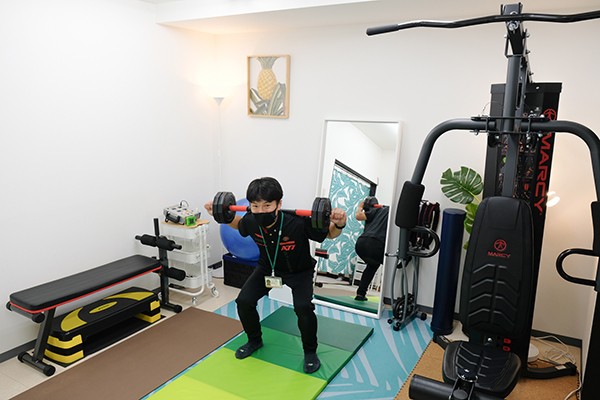 Kaatsu training is appealing in many ways, especially in the intensity and effectiveness of its exercise. Mr. Kodama recommends either one or two 40 minute sessions a week as sufficient. Usually one advanced course session is 5,000 yen including tax, but a set of ten tickets is 40,000 yen, a considerable discount. First time visitors can enjoy an even greater discount with 10 tickets for just 35,000 yen, which represents amazing value! Kaatsu training is always one-to-one and thus usually rather expensive, particularly in central Tokyo. 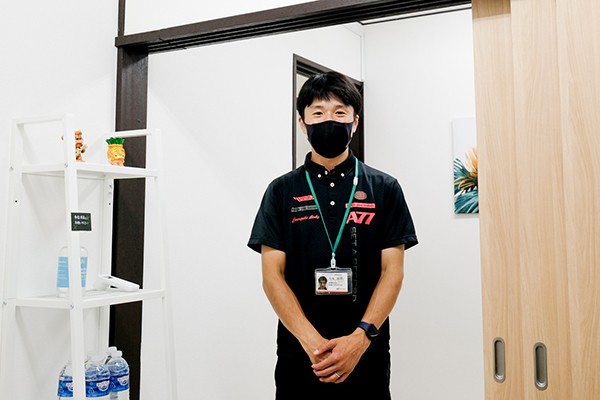 Kotomise readers can enjoy a 60-minute trial session coupon for just 3,000 yen, a remarkable 50% discount! If you’ve ever wanted to try kaatsu training this is a terrific opportunity, so why not take the first step and give Mr. Kodama a call to make a reservation? “A large proportion of our customers are regulars. People really get into it, just like I did. It’s real exercise for busy people,” he said, laughing.

50% off for first-time trial lesson customers