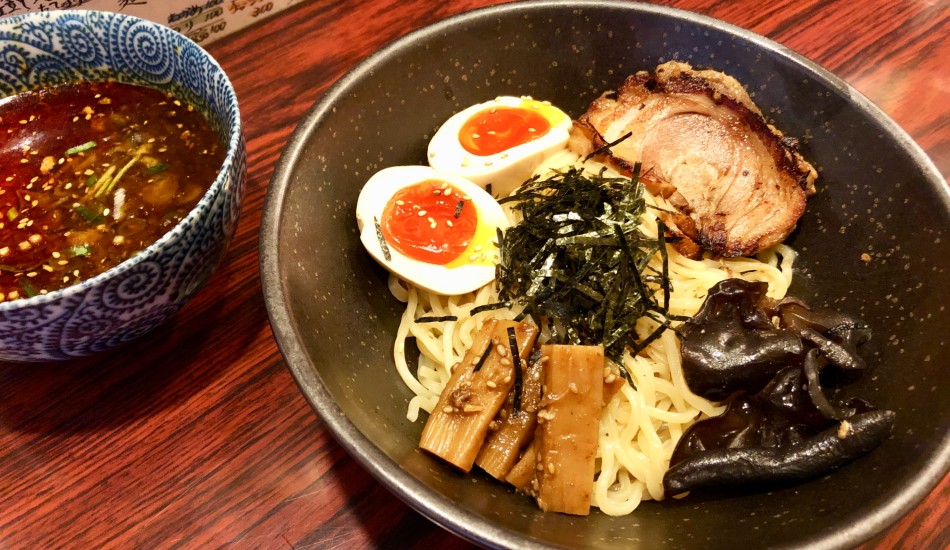 Kanekichi is a unique ramen shop that has been serving the lucky residents of Ojima for nearly 20 years now. On a recent rainy spring afternoon, we dropped in for a chat with the highly engaging owner, Mr. Kenzo Makishima. 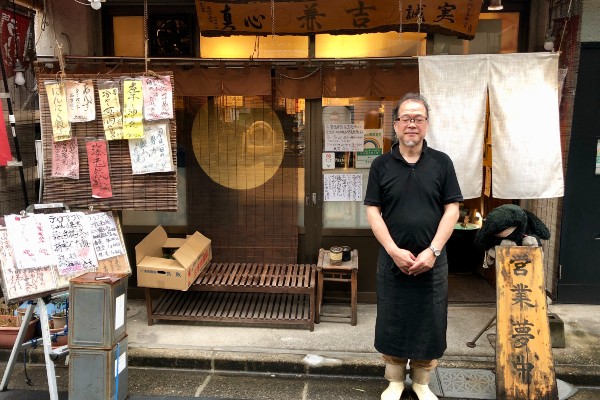 Located on a backstreet just five minutes from Ojima station, Kanekichi could easily be mistaken for an izakaya by casual passersby. It’s all ramen though, as Mr. Makishima explained, “I’ve always been interested in creative work and working with my hands, cooking, calligraphy and designing. At first, I worked in the fashion business for several years, then worked in a well-known ramen restaurant in Kagurazaka where I learned the trade. I went independent in 2003 and opened Kanekichi, which is named after my grandfather.” 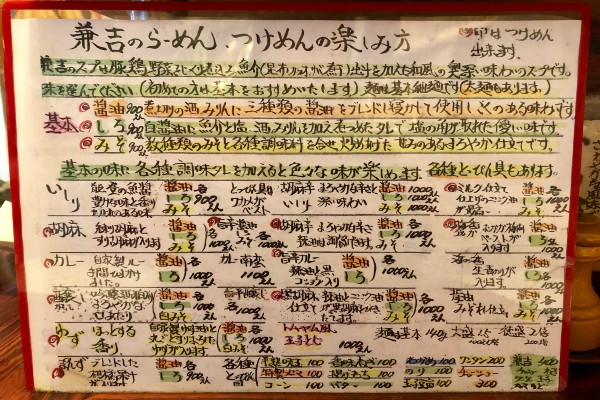 Not only did Mr. Makishima create his own broths entirely from scratch, he also developed a unique system of customisable dishes. The broth itself contains a wide variety of ingredients: pork, chicken and vegetables are simmered together with kelp, dried bonito, dried mackerel and other seafood items. There are three basic kinds of ramen on the menu: soy sauce, white (shiro), and miso (fermented bean paste). All start at 900 yen. 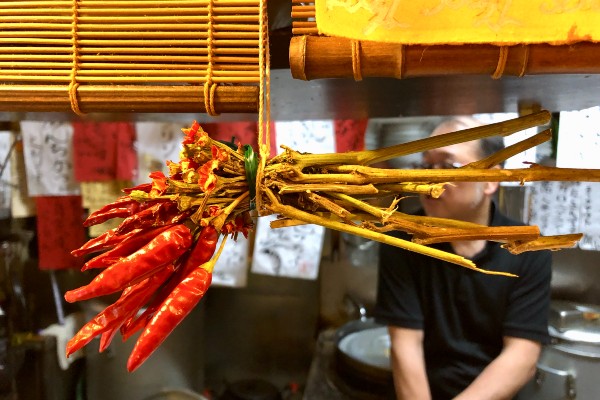 Customers can then select from a variety of seasonings, choose the thickness of the noodles (thin or medium) and add the toppings of their choice. To illustrate the complexity of Kanekichi’s ramen, the miso ramen contains a selection of several miso, notably a strongly flavoured Hokkaido one and a slightly salty red koji miso from Aichi Prefecture, together with 15 different kinds of seasoning. The soy sauce soup is a blend of three different varieties which are steeped for two or three weeks to deepen the flavour even further. This is serious ramen. 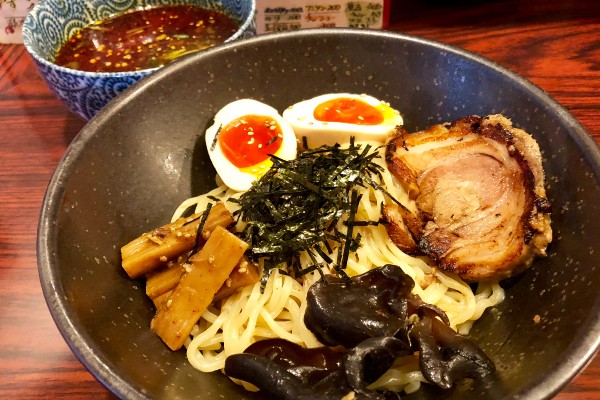 “I usually suggest first-time visitors try the basic ramen,” says Mr. Makishima,” but the dish with the highest number of repeat orders is this umakara curry tsukemen (1,100 yen).” In tsukemen the noodles and topping are served separately to the hot sauce, then dipped and eaten. For an extra 300 yen the remaining curry sauce can be cooked with rice into a risotto! 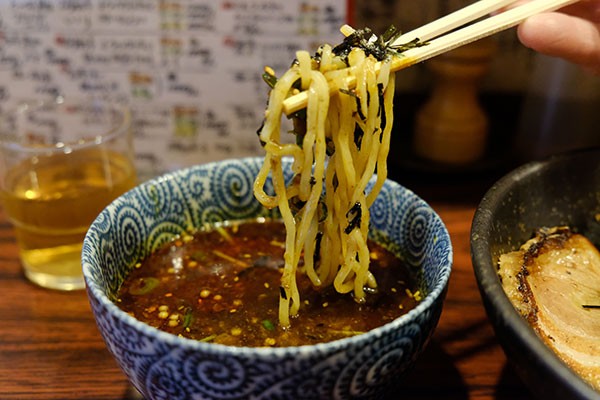 The curry sauce is a Kanekichi original, of course. While it’s a soy sauce-based Japanese curry, it’s spicier and less sweet than usual, with a pleasant tingly aftertaste. The noodles are the medium-sized variety, with a nice chewy texture. “I tried around 20 different noodle makers,” explained Mr Makishima,” and found that this brand was best.” The curry sauce is rich and savoury from the fried onions, unlike any I’ve eaten before; it’s easy to see why so many people become addicted to it. The homemade cha shu is also exceptionally good and can be ordered to takeout. 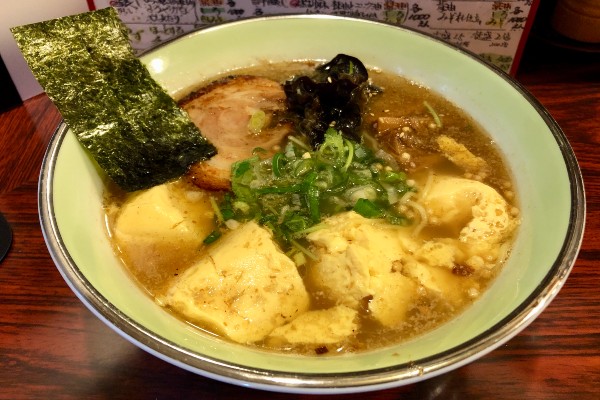 Mr. Makishima’s second recommendation was this “white” ramen topped with egg tofu. Now this is a really unusual combination, to put it mildly. The soup contains broth made with various fish and seafood, together with white soy sauce, yet is neither salty nor overly fishy on the tongue. It also contains negi onion oil cooked with garlic, ginger and various other spices to create a soup that is both light and deeply savoury at the same time. Remarkable. 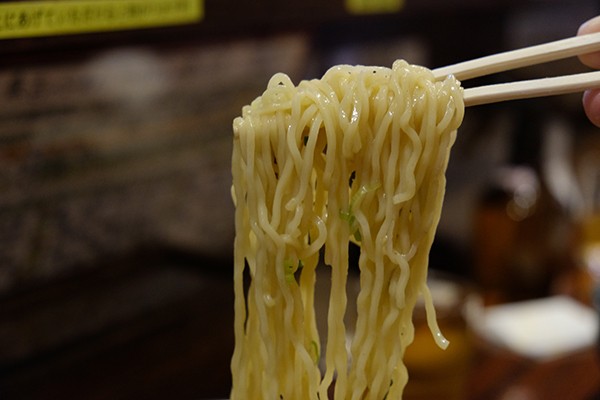 The noodles are traditional-style thin noodles, selected to match the egg tofu. 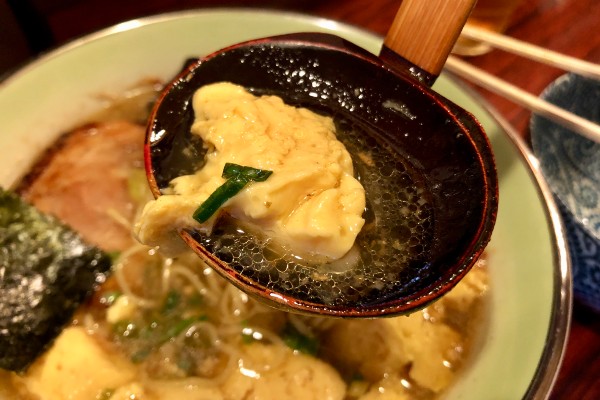 The homemade egg tofu has a delicate flavour and is altogether an elegant item, more commonly found at upmarket restaurants. We were very impressed with both the ramen and the tofu. Kanekichi has many female customers and kids love the flavour too, according to Mr. Makishima. 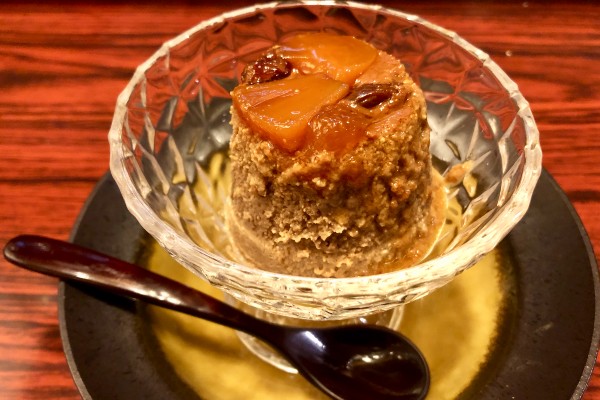 Given Mr. Makishima’s creativity (he also carved the signboard hanging outside the shop) it came as no surprise that he makes original desserts too. This chocolate cream cheese pudding combined chocolate pudding with cream cheese and was topped with fruit such as pineapple, peaches and raisins soaked in rum and brandy then flambeed. It was terrific, rich and chocolatey with a real liqueur flavour to the fruit. You really wouldn’t be surprised to find this on sale at a Ginza patisserie, such is the quality. Amazing value at just 400 yen. Takeout is available too. Mr. Makishima mentioned an apricot sherbet he makes for summer, topped with brown sugar syrup. 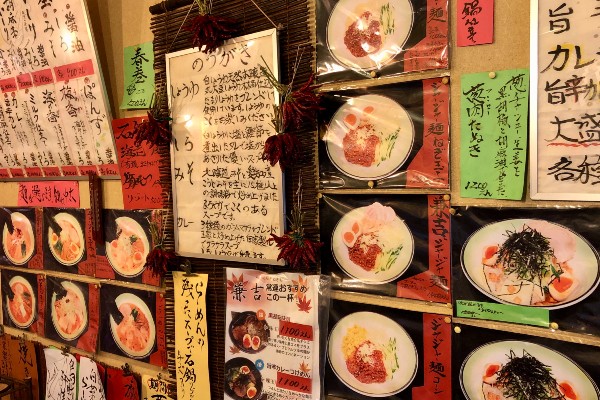 The menu at Kanekichi is enormous and varied, even containing ramen made with ishiri fish sauce from the Noto Peninsula of Ishikawa Prefecture. You could probably eat a different type every day for 3 months and still not finish the menu! 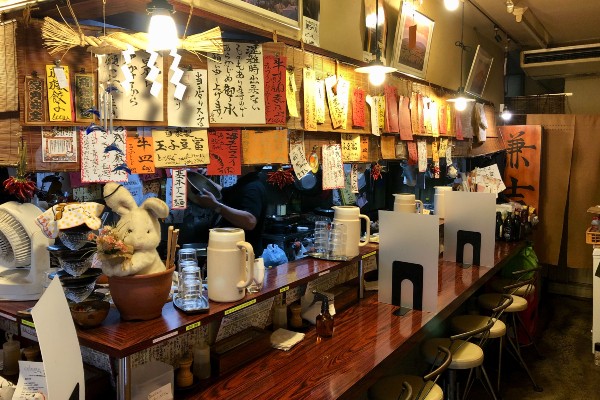 The two dishes we sampled at Kanekichi were excellent, while the shiro ramen with egg tofu was a totally unique creation. All prices include tax and it’s cash only (Kanekichi doesn’t have a website either). Mr. Makishima was born and raised in the Ojima area and has an encyclopedic knowledge of the history and culture of Koto-ku and its environs. Whether you’re a hardcore ramen enthusiast, a local resident or just fancy something different from an independent ramen shop, Kanekichi is highly recommended.