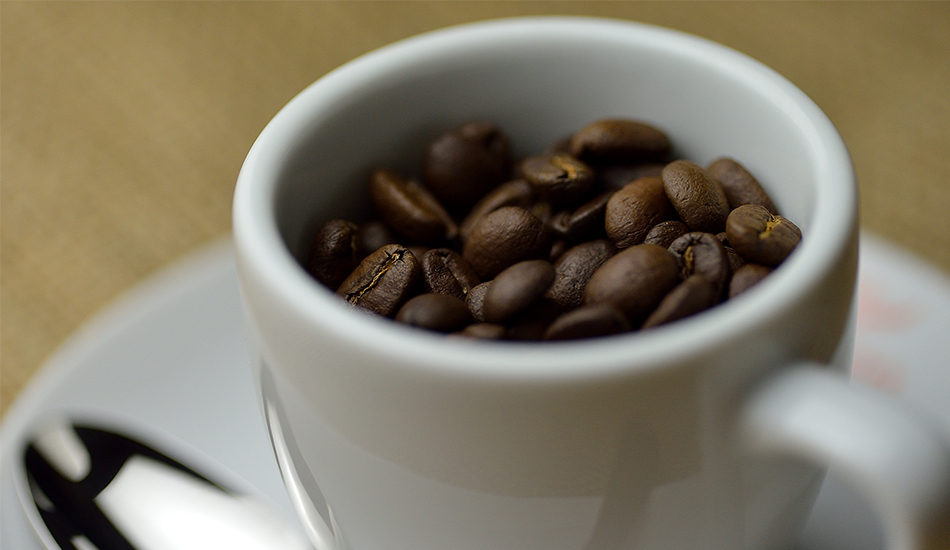 Mr. So Tanabe is a pioneer of the modern coffee business in Japan. Deeply passionate but low-key, he has spent nearly 20 years cultivating personal relationships with farmers in Guatemala and Brazil to ensure free and fair trade in top quality beans. His company Pico imports and distributes coffee beans, among many other activities. On a recent afternoon, we popped into his home base, Cafe des Arts Pico in the Botan area of Koto-ku near Monzen-nakacho station, for a very interesting chat. Over a cup of coffee, of course. 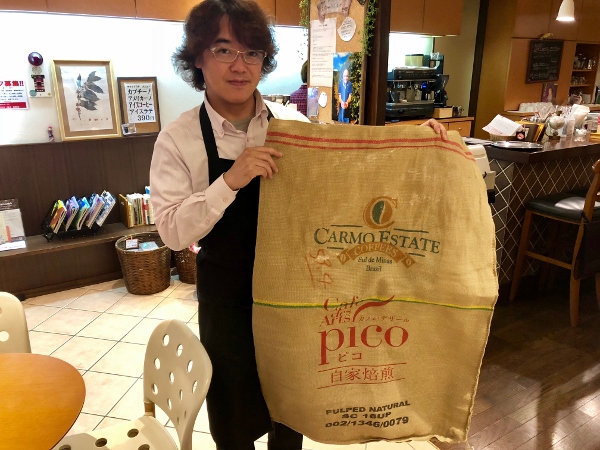 “My first coffee experience was as an elementary school boy,” says the distinctly youthful and eloquent Mr. Tanabe. “We lived in the Waseda area of Tokyo at the time and there happened to be a coffee roaster nearby. There were very few roasters back in those days, the early 1980s, unlike today. My parents bought freshly ground coffee from the shop and I was given some to drink. I suppose I was about six or seven. Well, I was absolutely transfixed by it. I loved it. A few years later we moved to Koto-ku and on his way home from work my father would pick up coffee at the department stores in Nihonbashi. It just wasn’t the same; it wasn’t as good as the coffee in Waseda.” 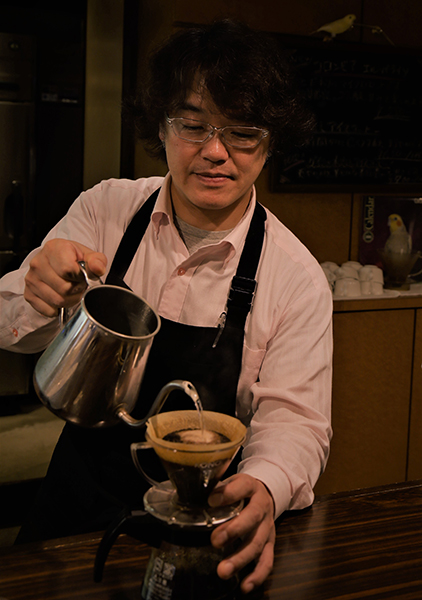 “I actually gave up coffee and turned to tea as a high school and university student. When I graduated and became a company employee, I spent a lot of time visiting various clients’ offices and would research the best coffee shops in the vicinity. The turning point for me was realising that good coffee, coffee I liked, came with a clear and understandable history to it: there was a when, why, where, and who. The poorer quality coffee came with no information attached. Since I was a kid, I had always wondered what made some coffee good and some not; I finally had the answer,” he explained. 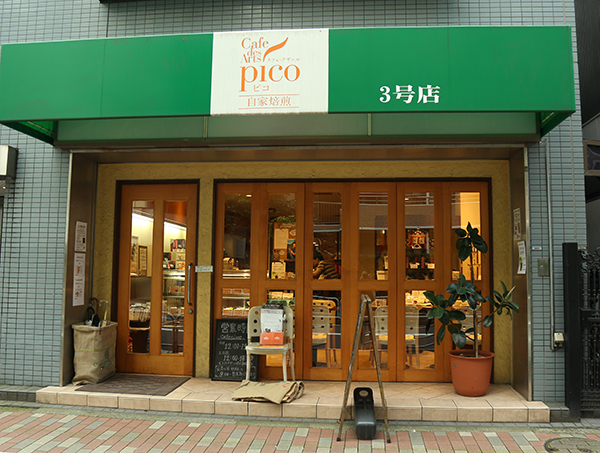 “I began the business importing coffee as part of a group to spread the cost, then founded Pico in 2002. The same year we opened the cafe and shop here,” he said. “When I first visited Latin American coffee plantations to do business, I found some places that exploited the seasonal workers and were less than straightforward in their business dealings. Over time I was introduced to reputable farmers with high standards and over the intervening years have established deep relationships with them. Happy staff grow better coffee, and better quality leads to increased prices which returns more money to the local economy.” 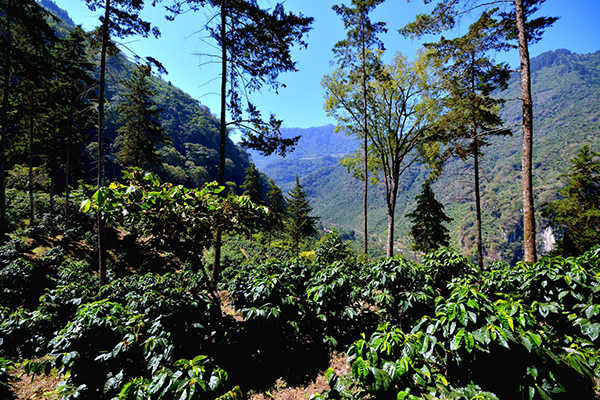 The highland region of Huehuetenango in western Guatemala produces some of the finest coffee in the country. Mr. Tanabe has developed a long and enduring partnership with La Bolsa plantation owner Renardo Ovalle, grandson of the founder. 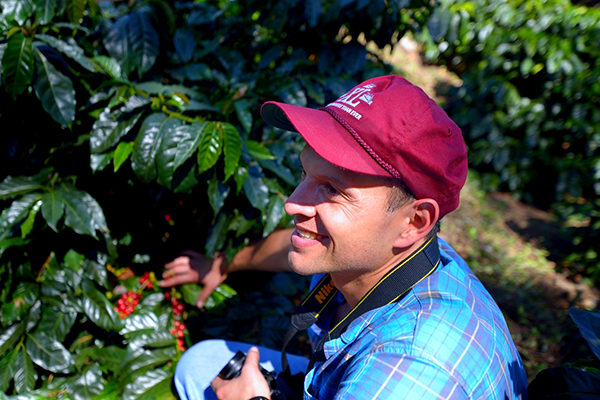 Mr. Ovalle’s family have long dedicated themselves to traceability and sustainability, with extra attention paid to the fine details of harvesting and processing. The coffee produced at La Bolsa is extremely highly rated by experts the world over for its flavour profile and versatility. 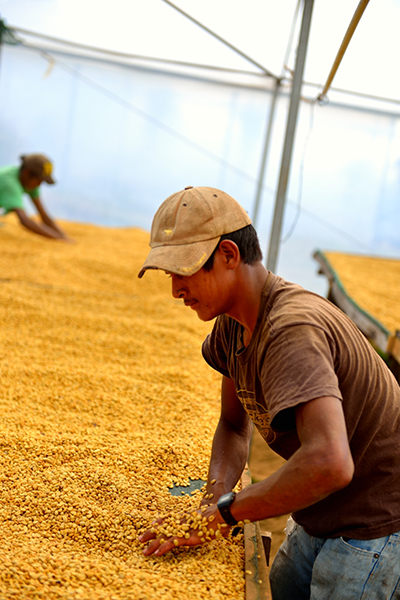 The estate is a shining example of how commitment to the health and welfare of the workers translates to better quality products. The educational, social and health care needs of the children are taken care of in a facility while their parents are at work. Mr. Ovalle’s mother Marie is a member of the Guatemala chapter of the International Women’s Coffee Alliance. Mr. Tanabe also contributes to educational scholarship programs for the children. 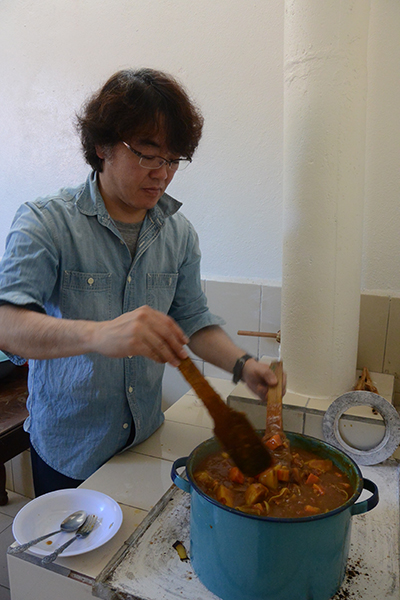 Mr. Tanabe cooks up a batch of curry rice for the children of the estate workers. 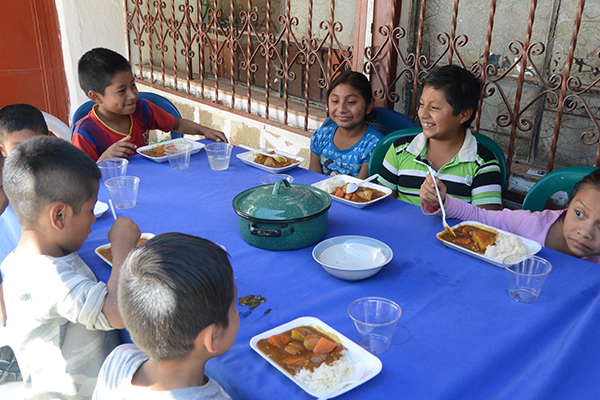 Which goes down a treat with the kids. 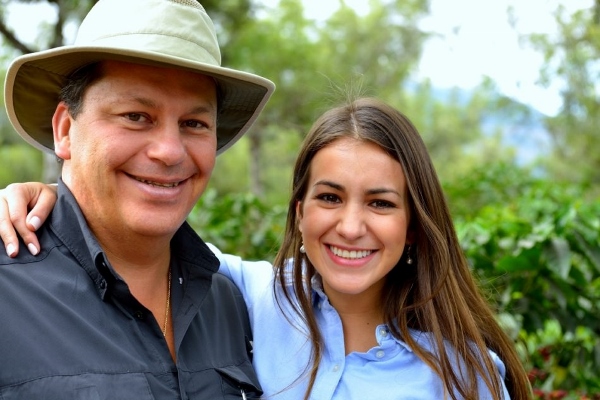 The Antigua region of Guatemala is famed for its active volcanoes and the high-grade coffee that grows in the nutrient-rich soil. The Zelayas are a long-standing and highly regarded family who own and manage several estates in the area. Mr. Tanabe is a regular visitor to the area and has a long-established business relationship and friendship with Ricardo “El Tigre” Zelaya, pictured here with his daughter. 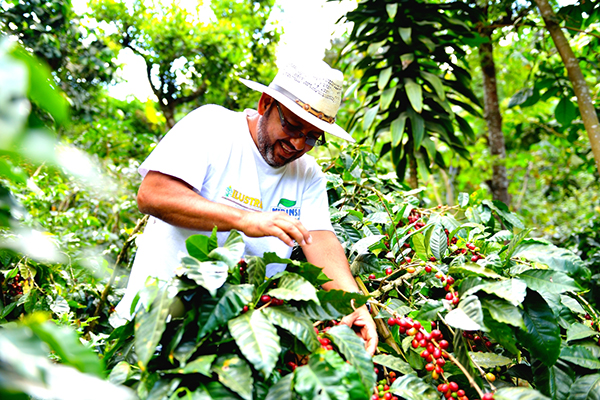 Also in the Huehuetenango highlands is the Las Rosas estate. Founded in 1920 by his great-grandfather, the current proprietor is Rolando Villatoro, who sells a variety of coffee beans to Pico, including the famous Geisha varietal. 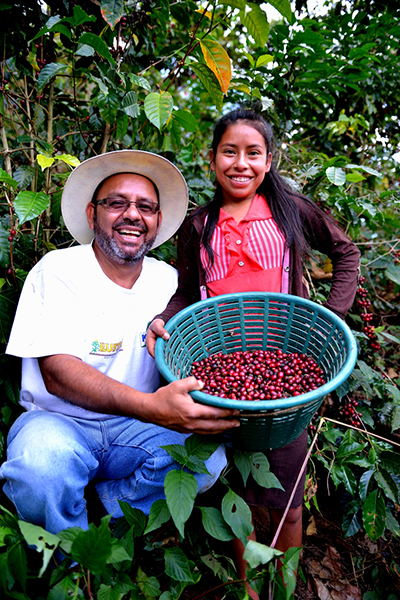 Harvest begins in December and continues until April. 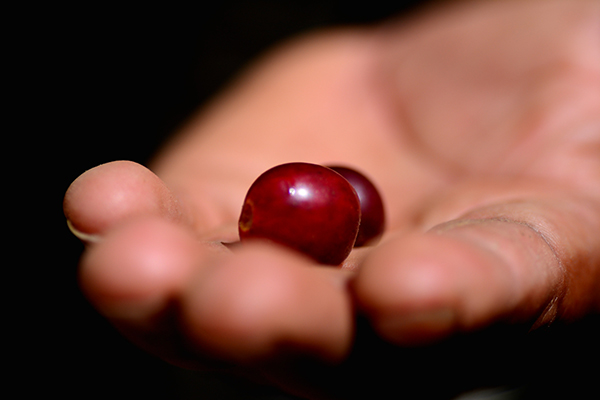 The ripe fruit, known as “cherries” are picked at their reddest. “In the best estates the ripe fruit are picked by hand, with the pickers rotating through the coffee trees every eight to ten days to take only the ripest, reddest fruit. It’s labour intensive, very hard work up on the mountain slopes and more costly but it’s the best way to ensure the finest quality,” explains Mr. Tanabe. 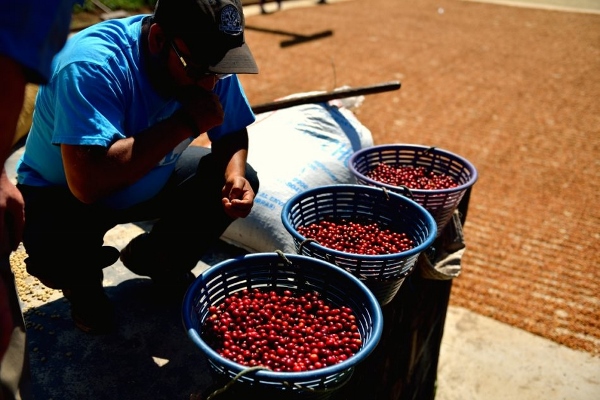 Mr. Villatoro contemplates the cherries. In the background previously picked ones can be seen drying. 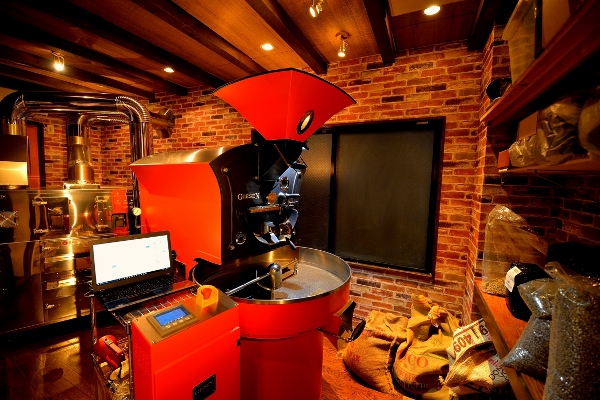 At Cafe des Artes Pico the beans are roasted in this monumental Giesen machine. 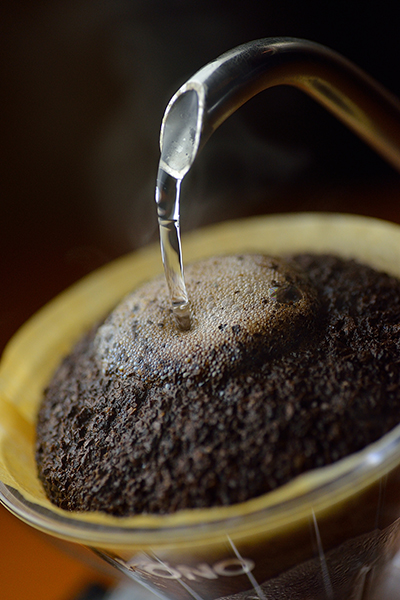 We enjoy a very tasty cup of Ethiopian coffee from the Yirgacheffe region in the Southern highlands, where the coffea arabica (Arabian coffee) plant originates. The top seller at Pico, it’s light and fruity yet has a touch of acidity. 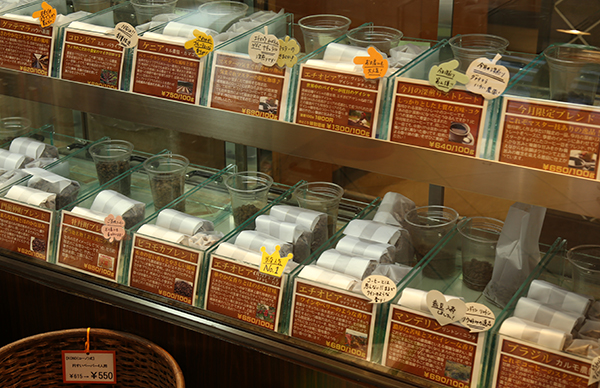 Pico sells an astonishing number of different kinds of coffee, with customers including high end restaurants and hotels. You may well have drunk Mr. Tanabe’s coffee without realising it. Just have a look at the online shop on the website! 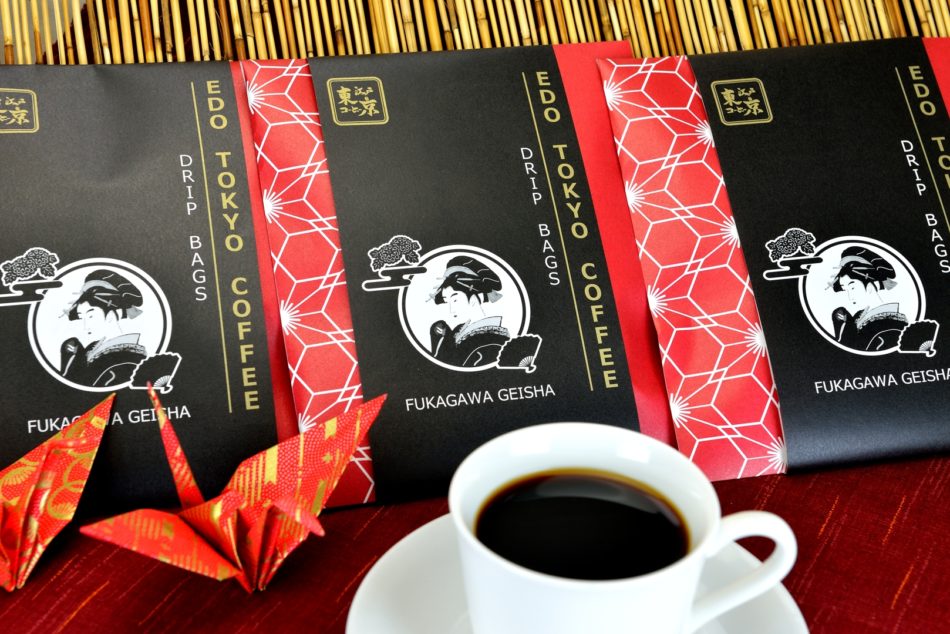 The Fukagawa Geisha comes from Ethiopia. The seeds were taken from the Gesha/Geisha area of Ethiopia to Central America in the 1950s. Panama Geisha exploded onto the world coffee scene in 2004 and it quickly became one of the most expensive and sought-after coffees on the planet. During the Edo Period (1600~1868) the Fukagawa area was home to many geisha, and still is today. It’s damn good coffee, a hint of acidity giving way to a slightly sweet aftertaste. Mr. Tanabe has strong opinions about the current state of the coffee business in Japan and is more than happy to talk about it.

Pico is the real deal; if you’re a coffee lover then this is the place for you.