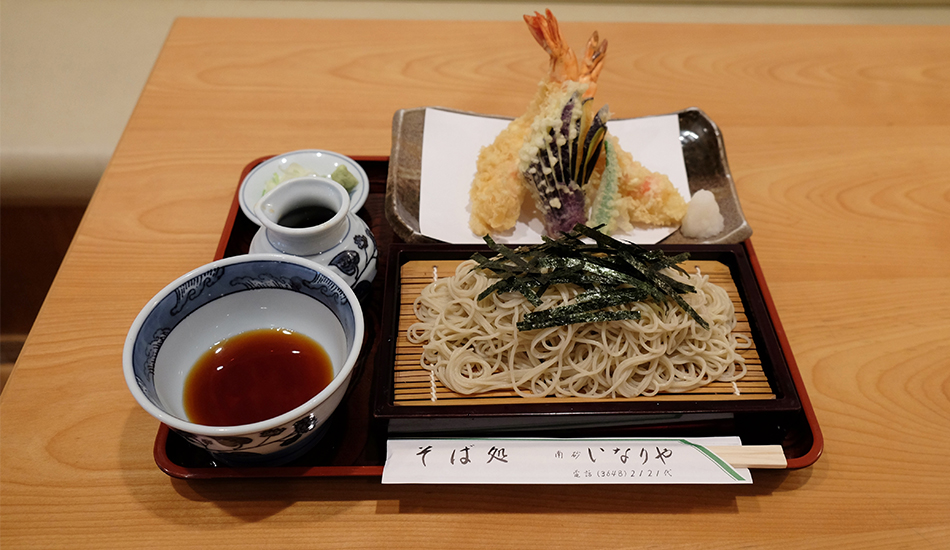 How well do you know the humble buckwheat?

Soba (buckwheat noodles) is such a deeply ingrained part of Japanese cuisine that it’s easy overlook. Though perhaps not as flashy or famous as their cousin, the ramen, you can nevertheless find a soba restaurant on almost every street corner in greater Tokyo, where they’re popular for their fast service, low cost, and generous portions.

However, not all soba are made alike. And the difference can be striking when you step away from the fast food options to try family-owned restaurants like Soba-dokoro Inariya of Minamisuna, Koto City. 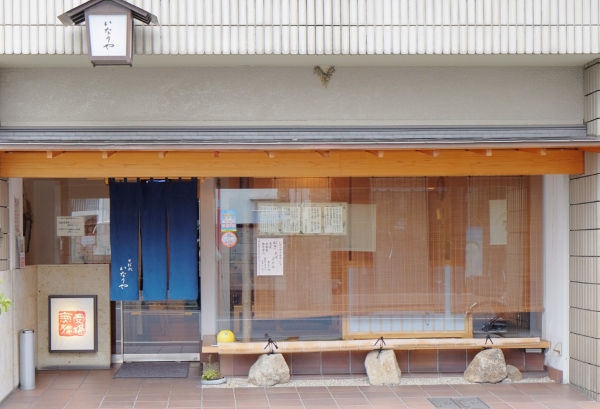 I won’t lie—this shop is a bit of a walk (roughly 10 minutes) from the nearest metro station, which may be dissuading to some. However, if you think of it as getting a little pre-meal exercise taking you through some of the calmer, more locally grounded parts of Tokyo, you’ll find that it’s well worth the trip. 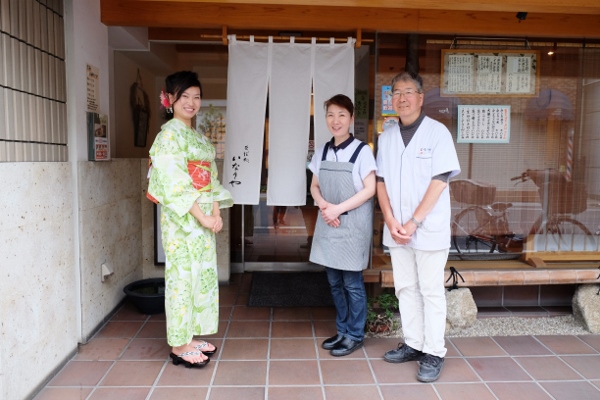 Mr. and Mrs. Ishida run Soba-dokoro Inariya. Mr. Ishida is the third-generation owner, and the store has been in location since 70-some years ago; despite its age, the inside manages to be both spacious and cheerful, while maintaining a sense of vintage authenticity. 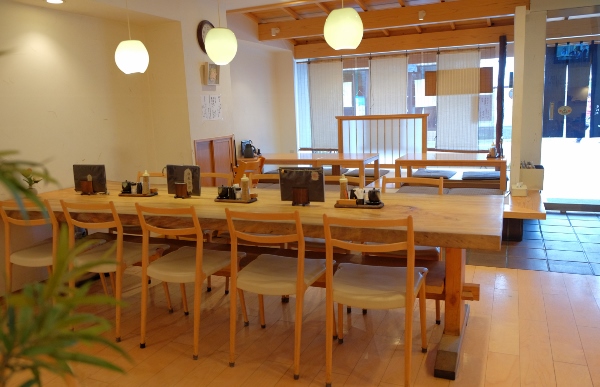 Soba noodles have been enjoyed for centuries in Japan, though it didn’t take off in popularity until the beginning of the Edo period (1603 – 1868).

“Buckwheat flour doesn’t stick together well, but what we use nowadays as a binder—wheat flour—was expensive back then,” Mr. Ishida explained. “So soba would be composed of almost 100% buckwheat, which made for very fragile noodles. Nowadays, most genuine soba places (including this one) make soba using a ratio of 7:3, buckwheat to wheat flour. By some accounts you can’t use less than 70% buckwheat and still call it ‘Japanese soba’.” 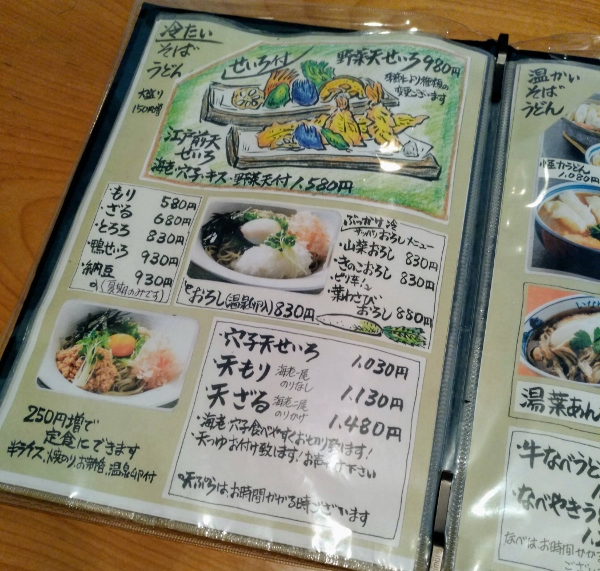 Many fast food joints and commercial soba noodles sold in stores, he advised me, use noodles made with a far lower percentage of buckwheat. Ironically, this is because imported flour is now much cheaper to obtain, especially compared to domestically-grown buckwheat. However, both Mr. and Mrs. Ishida insist on the use genuine Japanese buckwheat from Nagano, the birthplace of Mr. Ishida’s father.

One advantage of being able to enjoy soba noodles with high ratio of buckwheat is its nutritional value. Buckwheat is dense in nutrients, including protein, and contains all 8 essential amino acids, plus flavonoids like rutin! It’s long been considered a healthy food option in Japan, and a great way to get some whole grain goodness into your diet, especially in a country where white rice reigns supreme. 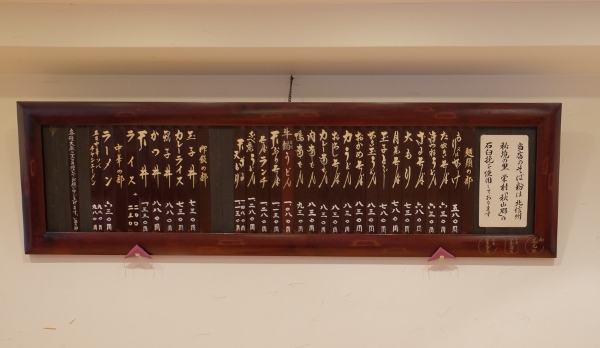 Soba can be served hot or cold: most people prefer hot during the winter and cold during the summer.

Cold soba is usually served on a “zaru” or “seiro” sieve after being boiled, then washed in ice water to tighten the noodles up. To go with it is tsuyu—a dipping broth made from sweetened soy sauce—and toppings such as scallions and wasabi.

Some people like to put the toppings into the tsuyu and mix everything up into one dipping sauce, but Mr. Ishida suggests otherwise: “Keep the wasabi out,” he says, “And put a little bit of it on each bite of the noodles, adjusting according to your own taste.” This helps keep the soba from losing its fragrance, which can happen all too easily if it has to compete with too much wasabi. 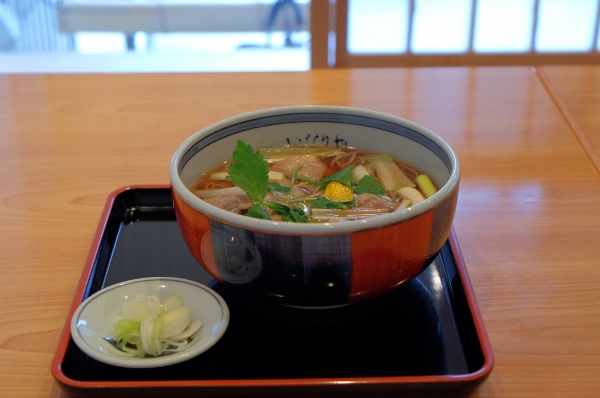 Hot soba is served in a soy sauce-based broth, and perfect on a chilly day. Whether you eat your soba hot or cold, though, feel free to slurp up the noodles! 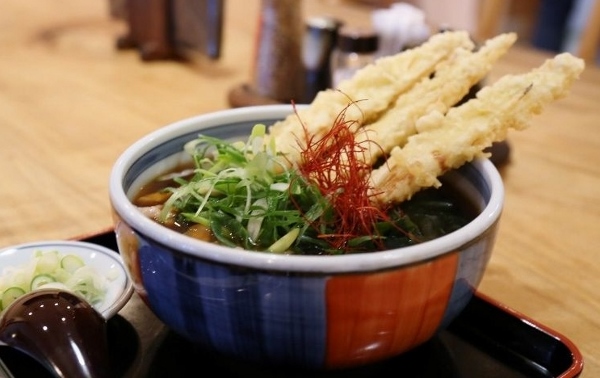 Most soba dishes also come with extra sides or toppings or your choice. For example, the popular “kitsune” option comes with sweet and salty abura-age (fried tofu skin), while the contrasting “tanuki” comes with fried tempura batter known as age-tama. You could get it “tsukimi” style, with an egg, or go for the “chikara” if you’re really hungry—and have it served with mochi! There are also seasonal specialties at Inariya, like mushrooms and green onion (as pictured above). 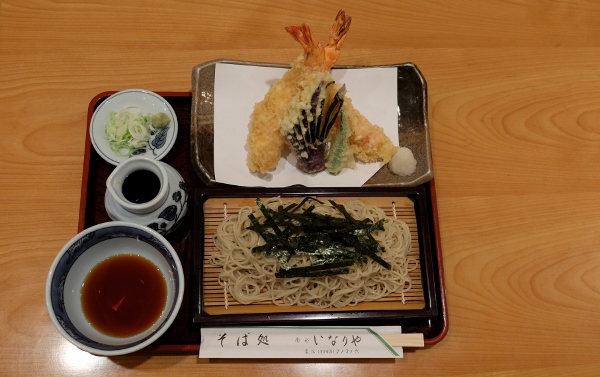 If you’re at Inariya for the first time though, my recommendation is the “Edo-mae Ten-seiro”, which roughly translates to “Edo-style tempura soba noodles served cold”. The tempura here is just as good as the soba, crispy and golden with a light batter encasing seasonal vegetables, kisu (smelt-whiting fish) and beautiful black tiger shrimps. Yum!

You can even ask for the tempura to be served first, and relish eating them piping hot with a glass of something nice. Since soba noodles are also best consumed freshly cooked, this will ensure that one half of the dish is not sacrificed for the quality of the other. 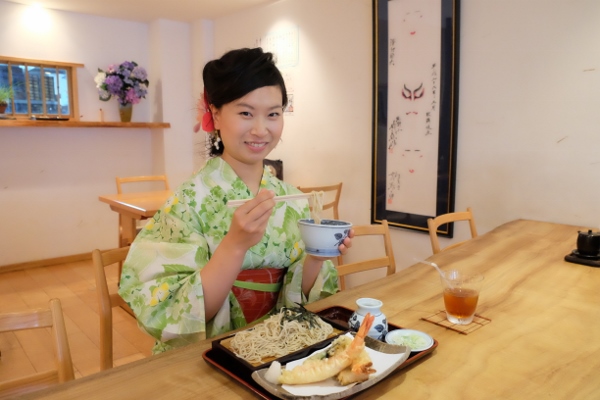 Despite the impressive volume, the price remains reasonable at 1580 yen, and most other soba dishes fall easily under 1000 yen despite the genuine work that goes into creating them. The soba noodles are all made by the restaurant—nothing purchased—and the ingredients are domestic. That says something about Mr. and Mrs. Ishida’s dedication, generosity, and their belief in old town friendliness.

After finishing up the noodles, sit back and relax with some complementary soba-yu. Soba-yu is the water in which the soba noodles were boiled. This comforting broth is great added to your remaining tsuyu, drank on its own, or even used as a mixer for Japanese shochu alcohol! Many restaurants will simply serve leftover soba-yu as-is, but Mr. Ishida insists on actually making a special batch of it, ensuring that it’s fragrant and rich. 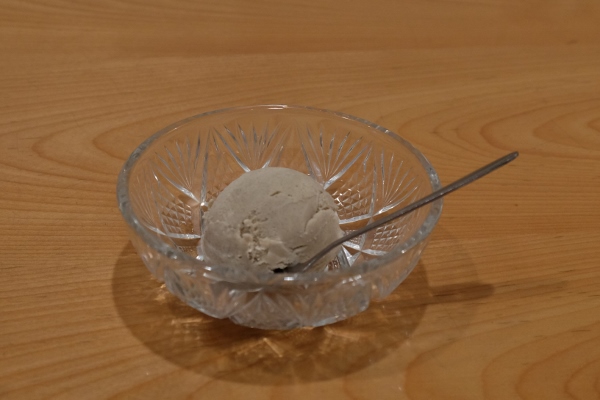 Or, if you prefer dessert, you can always get soba ice cream to finish your trip to soba wonderland! 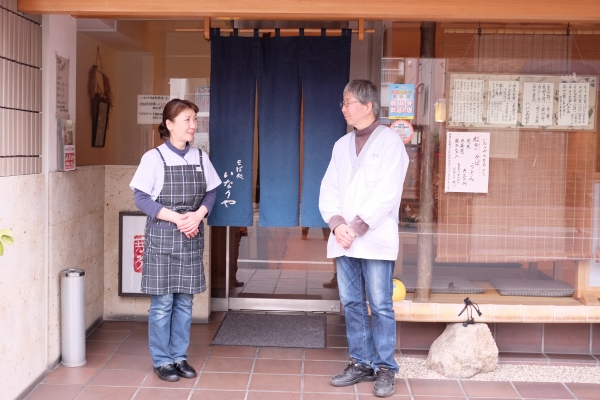 “It’s thanks to our customers that we can still serve soba, 70-plus years since we first opened,” Mrs. Ishida said, noting without bitterness the increase in convenient chain-store restaurants that have taken over much of Tokyo in recent years. “And we want to always show our appreciation for that.”

Hence, nothing that doesn’t pass the Ishida’s strict code of quality ends up on the table, and they’ve gone so far as to discontinue menu items for which quality ingredients cannot be obtained.

So go forth, Tokyoites and visitors, and give the humble soba another look! Eat around often enough and you’ll soon realize just what delicacy buckwheat can be when done right. And when in doubt, you can always come back to Soba-dokoro Inariya for a reassuring taste of the real thing.

Available on: Monday and Tuesday