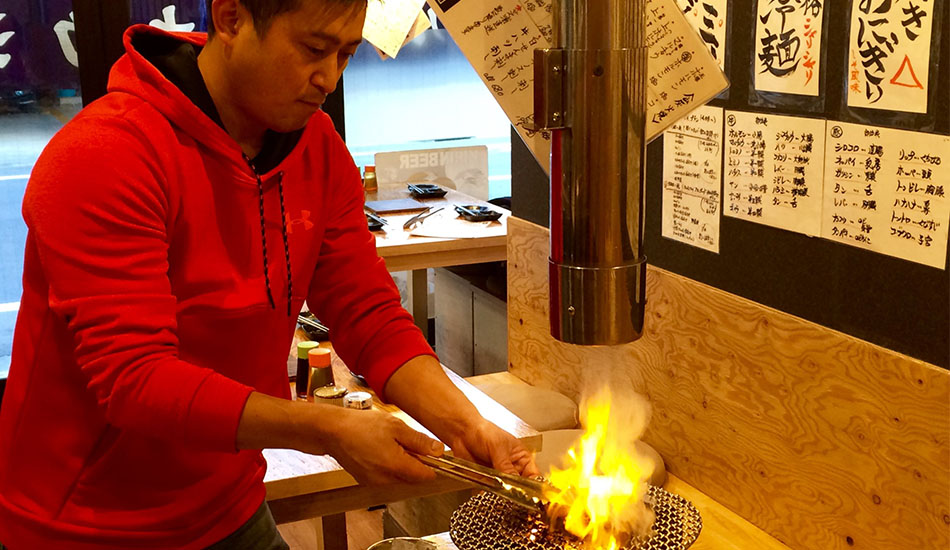 The Joy of Horumon at Horumon Nakaji

What is “horumon”? It’s rather embarrassing to admit that until very recently I had absolutely no idea, despite having lived in Tokyo for several years. I knew it was some kind of meat, and more popular in Western Japan than the Eastern side, but beyond that I was clueless. The dictionary said offal, hardly the most enticing word to an English speaker. Therefore, it was with excitement and a slight sense of trepidation that I entered Horumon Nakaji, the horumon restaurant in Minamisuna, Koto-ku, a few minutes’ walk from Minami-sunamachi Station. 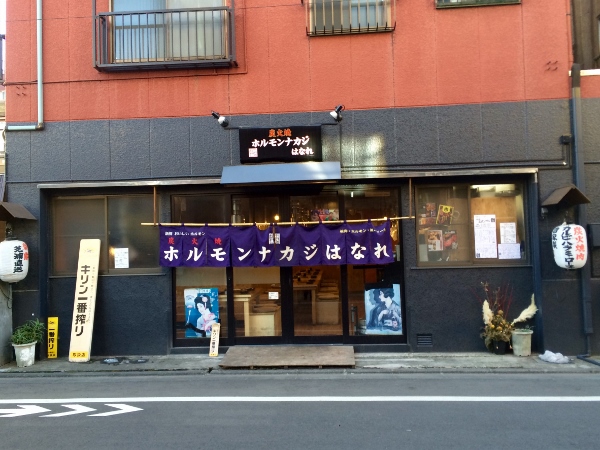 Opened in October 2016, Horumon Nakaji is the second restaurant on the same street owned by proprietor Satoshi Nakaji. “The original restaurant is just 50 metres down the road from here,” says the ebullient Mr. Nakaji. “Thanks to our customers’ support, we have outgrown it and opened the restaurant here to meet the demand. We still open the original place at weekends or on holidays but this is the main shop now. Horumon is labour intensive, as you’ll see.” 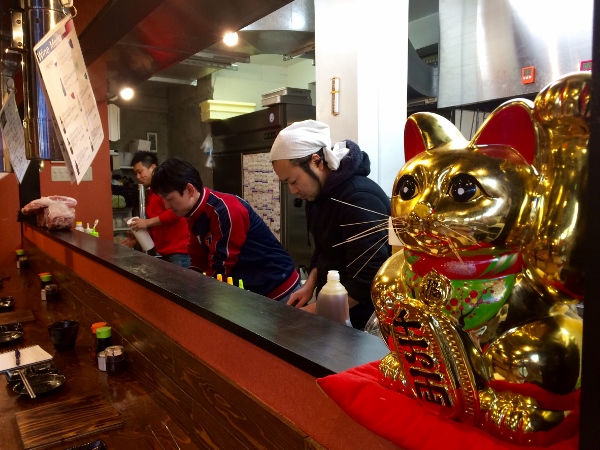 Mr. Nakaji disappears behind the counter to prepare for the evening with supervising director Mr. Haruki Kato, and his brother-in-law Mr. Tadahiho Ueda. 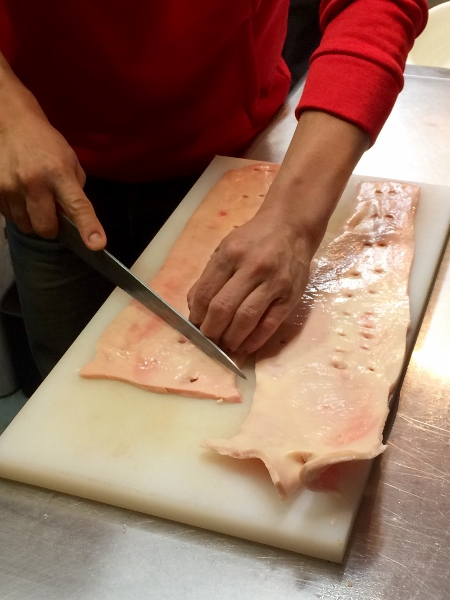 It is said that the name horumon comes from the Greek word hormōn, meaning to ‘impel, set in motion’. The word hormōn is also the origin for the English word ‘hormone’. In the Osaka dialect of the Kansai area, ‘horu’ means to throw away and ‘mono’ means thing, hence the idea that offal was thrown away and not consumed as food. Regardless of its origin, horumon is now a popular part of Japanese cuisine. Here, Mr. Nakaji gets busy scoring a lattice shaped pattern on a slice of kori-kori, the horumon name for a cow’s aorta. “Kori-kori” is an onomatopoeic word used to describe a chewy, crunchy texture. 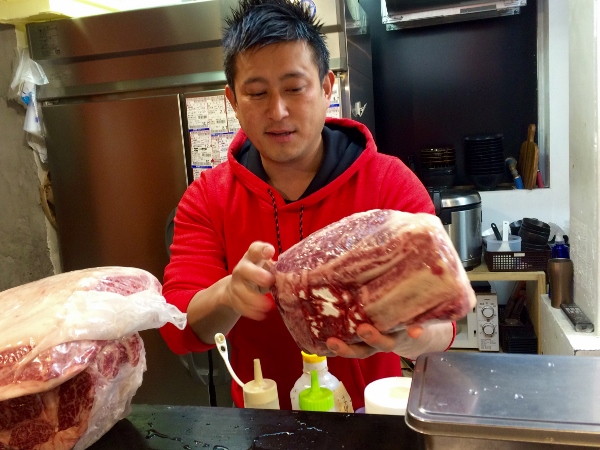 This large block of meat is boneless short ribs, and the area Mr. Nakaji is pointing to is the best part, known as ‘jo calbi’ in Japanese. At Horumon Nakaji the prices are very reasonable, for both horumon and the more familiar cuts of beef. 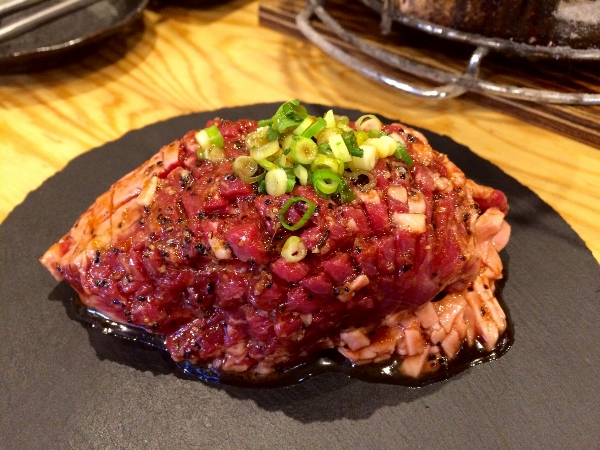 Mr. Nakaji begins by firing up a shichirin charcoal cooking stove and placing it beneath the gleaming extractor fan. This is a plate of iwa harami (beef diaphragm), a very popular cut of steak around the world. 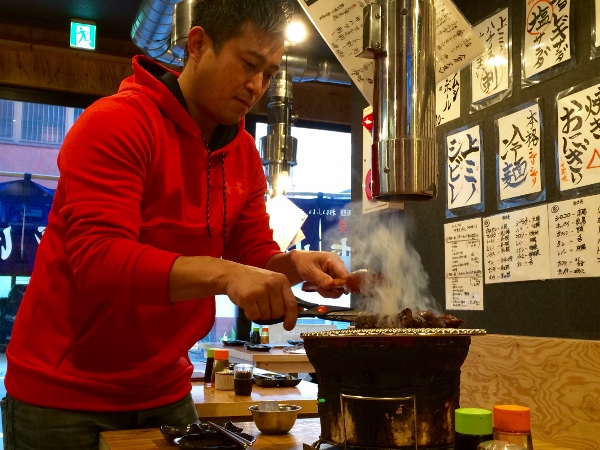 “Cooking horumon is very different from barbecuing yakiniku style,” says Mr. Nakaji as he focuses intently on the cooking meat. “Each cut of horumon requires a different cooking style. If you grill it too much the meat shrinks and loses its flavour. Many cuts of horumon are rich in collagen, and they need to be cooked less on the collagen side. That’s why we cook the meat for the customers. It takes a lot of practice to be able to do it correctly and serve the meat at the optimum moment.” 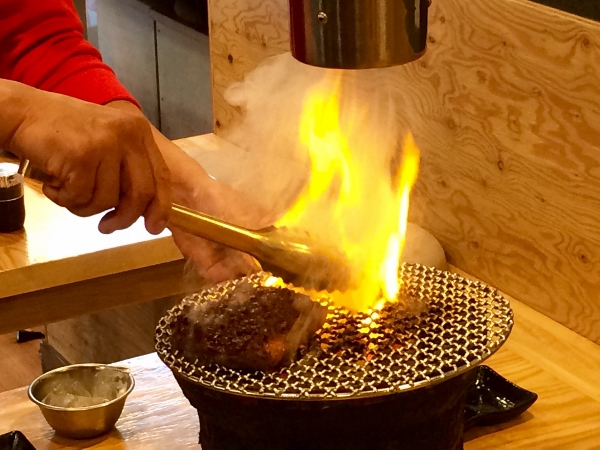 Mr. Nakaji flips the meat and frequently turns it to prevent burning while ensuring it is cooked thoroughly. His movements are deft and economical, the sign of many hours practice. 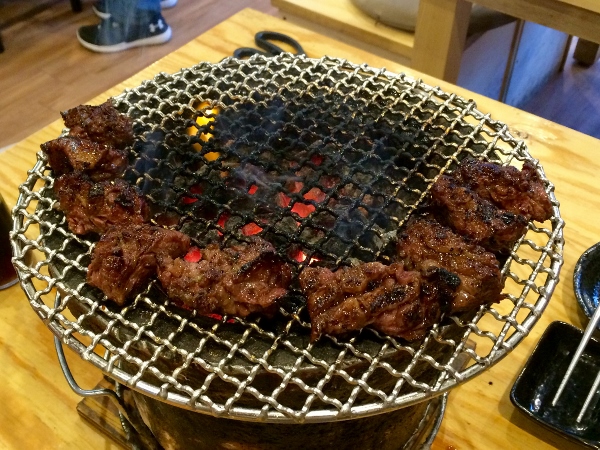 A quick snip with the scissors and the meat is done, displayed around the edge of the metal grill. 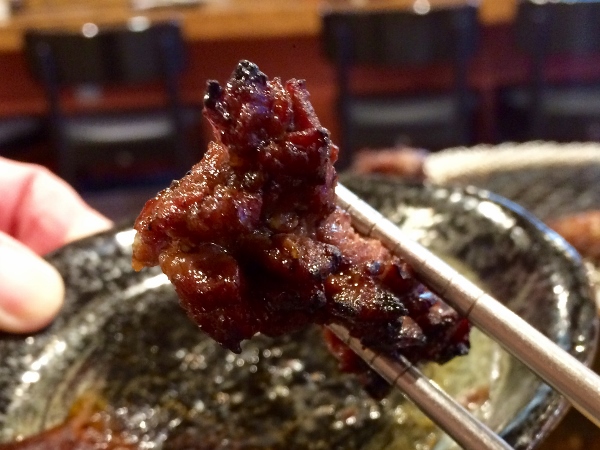 It looks delicious and tastes wonderful; rich, juicy bites of steak cooked to perfection and piping hot. “We serve a homemade sauce (“tare” in Japanese) for dipping, but you don’t really need it, to be honest,” says Mr. Nakaji. He’s right; the meat is so good it requires no other flavouring at all. 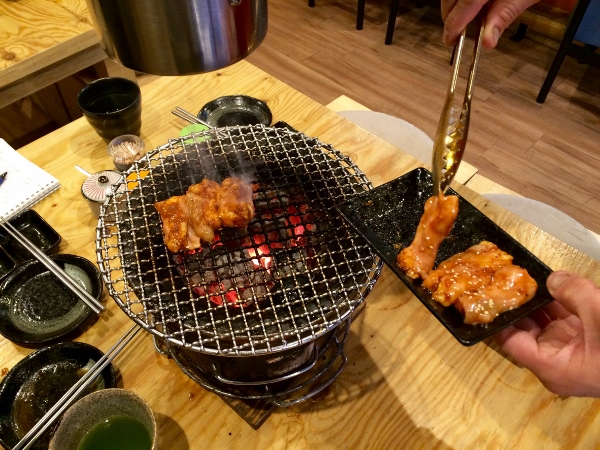 Next on the menu are the popular small intestines (“shocho” in Japanese). It’s very high in collagen, which is one reason horumon is very popular with Japanese women. “We have many female customers,” says Mr. Nakaji. “Horumon is a bit cheaper than yakiniku, it’s very healthy and is full of collagen. It’s really good for your skin.” 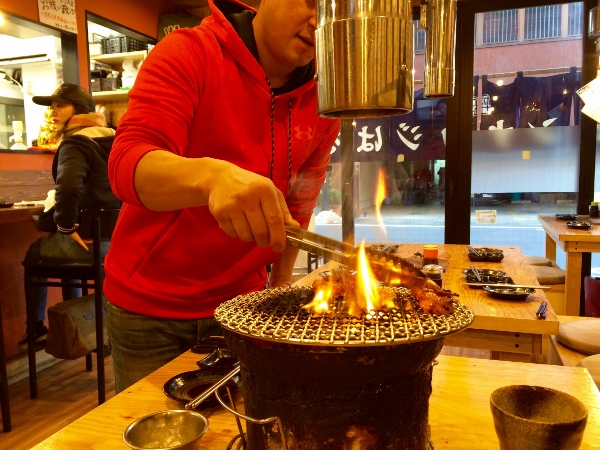 The meat is cooked for around four minutes on the skin side, then flipped and given about a minute on the collagen side. Again, timing is everything. 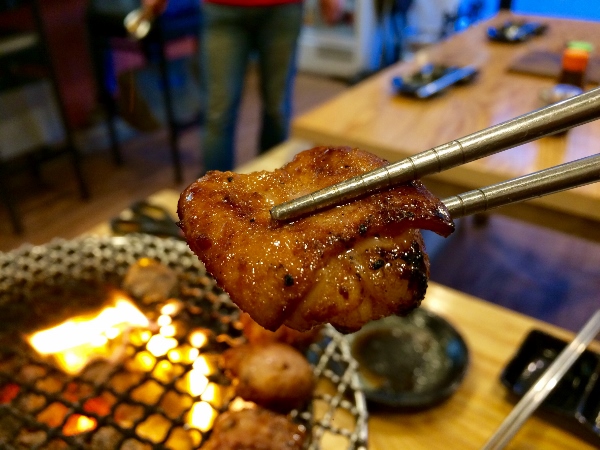 The meat looks great, plump and evenly browned on both sides. The texture is completely different from the iwa harami; the skin is chewy while the collagen side is soft and juicy. 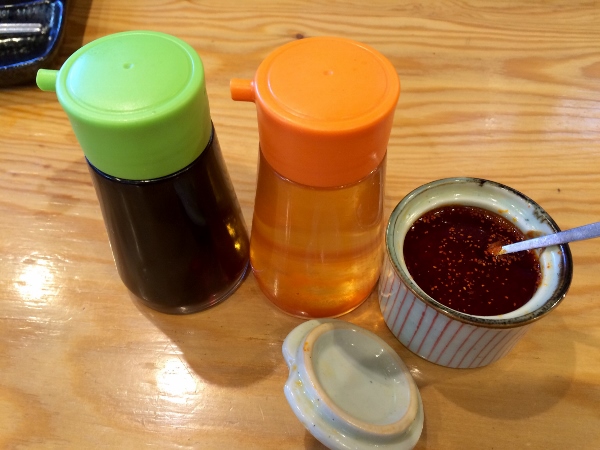 Another kind of original sauce is served with it: a unique and spicy blend of garlic and chili pepper suspended in rice vinegar. The piquant tang of the sauce adds another dimension to the succulent meat. 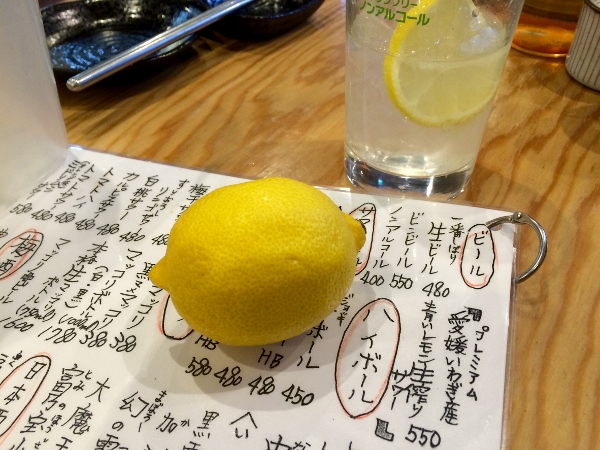 The drink menu at Horumon Nakaji is wide and features a selection of beer, wine, shochu and soft drinks. A very popular tipple is the Premium Lemon Sour, made with organic lemons from the island of Iwakijima in Ehime Prefecture. Iwakijima is famous for its lemons (known as green lemons in Japanese). 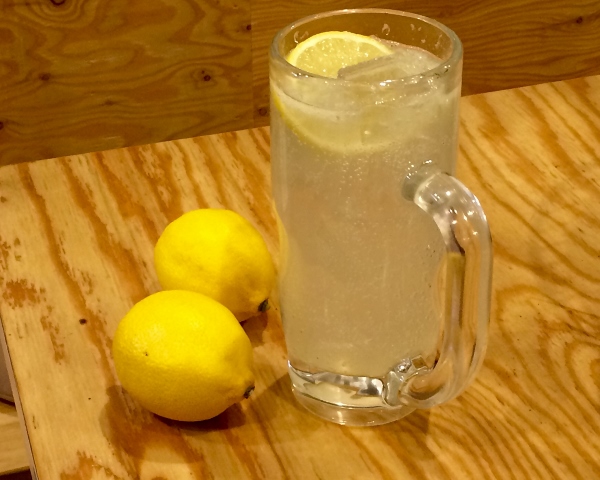 The drink is almost overpowering in its intense lemon flavour. Ice cold, sharp and incredibly refreshing, it’s the perfect accompaniment to the luscious meatiness of the horumon. It’s also very good value at 550 yen. You better hurry though, as the lemon harvest finishes in June and doesn’t begin again until autumn. “We puree the lemons and freeze them but it’s so popular in summer that we always run out,” adds Mr. Kato. 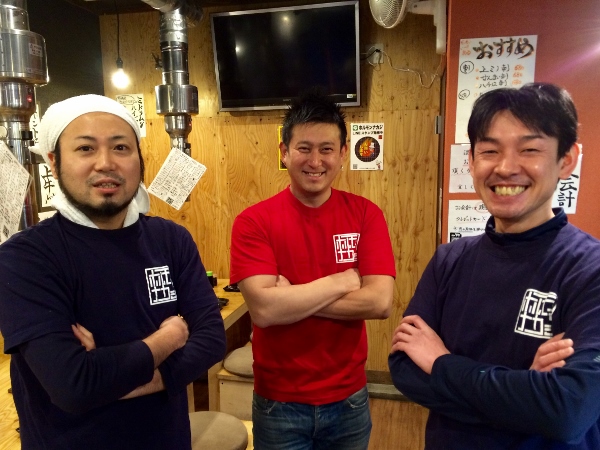 In a former life, Mr. Nakaji was an aspiring comedian from Nara, seeking to make a success in Tokyo as one half of a duo. Now, he’s a restaurant entrepreneur and his former partner is a greengrocer who delivers vegetables to Horumon Nakaji as part of his own business. It certainly is interesting where life can take a person. Mr. Kato and Mr. Nakaji met at a previous workplace and clearly get along famously well; together with the slightly more reserved but dryly humorous Mr. Ueda, they make a great team, creating a warm and friendly atmosphere in the restaurant. 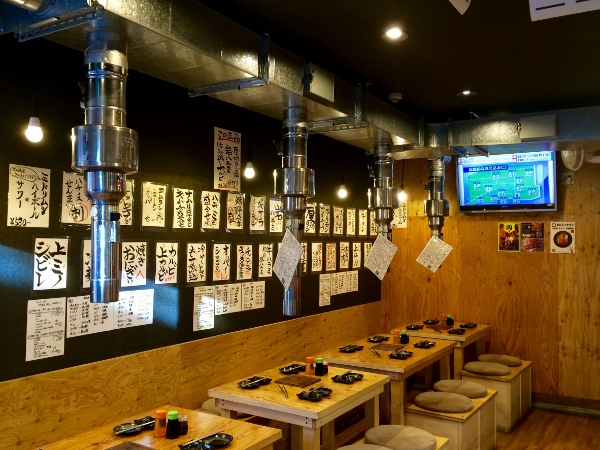 If you’re curious about horumon and would like to try it (and why ever not, it’s fantastic) then Horumon Nakaji is the point to start. The food is delicious, the atmosphere is incredibly welcoming and the lemon sours are easily the best I’ve ever had. The prices are very reasonable as well. Whether you want to beat the winter blues with food to warm your soul or boost your stamina in the heat of high summer, Horumon Nakaji is the place to go. 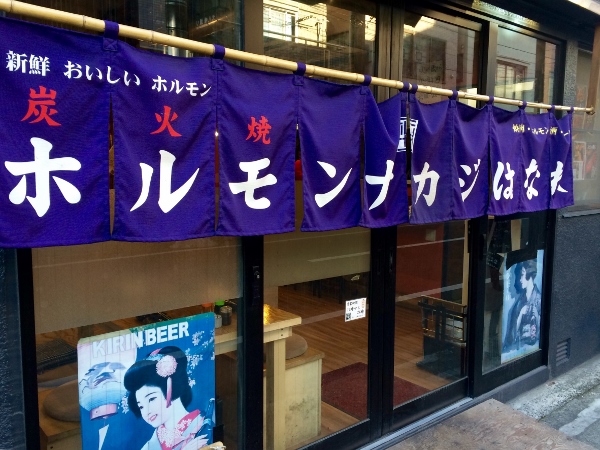 10% more offal when you order the chef's selection (omakase).