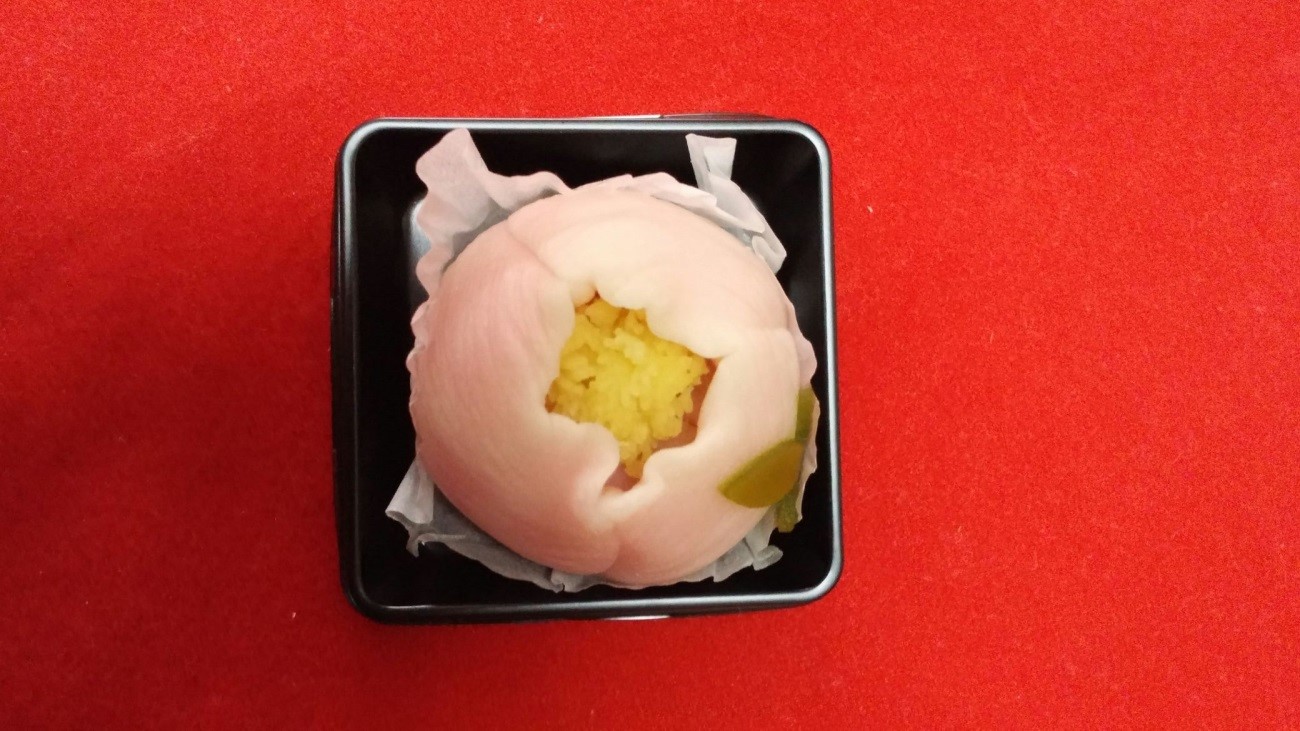 Looking for a gift which contains an essential taste of Japan? Why not try wagashi or Japanese sweets. These traditional sweets are very different from Western-style sweets and chocolates, the latter of which have become so popular with young Japanese women. There are various types of wagashi, but they generally have several things in common: their delicate appearance, subtle taste and the natural ingredients employed in their making.

On Fukagawa Shiryokan-dori Street, just a couple of blocks down from one of Tokyo’s most interesting museums (the Fukagawa Edo Museum – check it out), you will find the Japanese sweet shop Futaba. Run by Mr. Kenichi Mori, the 3rd generation owner, Futaba has been on this site for 65 years. 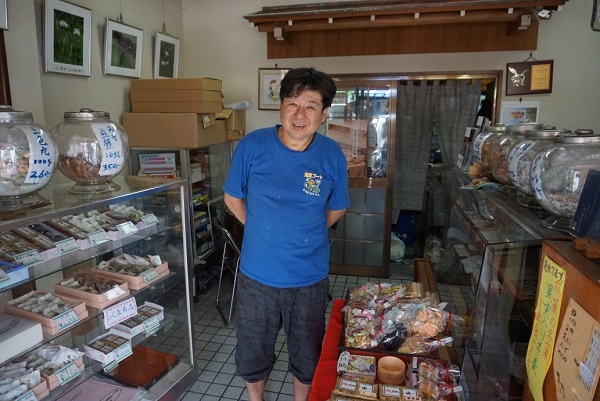 When asked what the difference is between wagashi and Western sweets, Mr. Mori says, “Presentation, originality, seasonality and ingredients”, and if you take a look at some of the items on sale in his small shop you will see what he means.

Wagashi come in all sorts of shapes and styles, and the shop displays an array of assorted sweets supplied by specialist wagashi makers both locally and from as far away as the Kansai area. This small shop turns out to be a veritable treasure trove of Japanese sweets.

In order to differentiate his family business from other wagashi shops, 5 years ago Mr. Mori set out to create something unique to Futaba. What he came up with is his own version of  neri yokan, a thick jellied sweet made from azuki beans, agar and sugar. 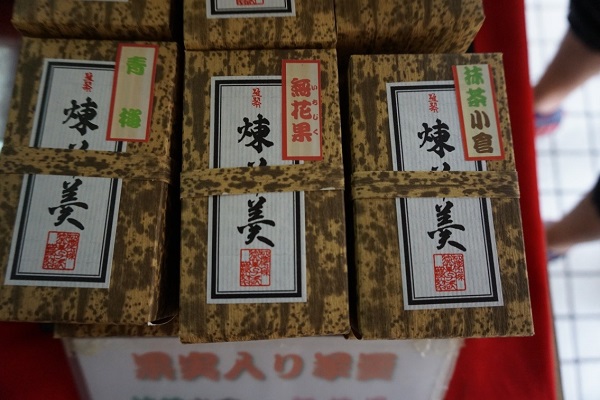 Now, to my untutored taste, yokan sold in department stores can be a bit bland and tend to have the same taste. This is not the case with Mr. Mori’s yokan: not only did each type have its own subtle individual taste, but their respective textures differed; from the soft creamy matcha-flavoured yokan to the crisper ichijiku with its fig extract. Refrigerated, these will last a couple of months and make an interesting gift for friends wanting to try a traditional Japanese taste.

As well as the yokan, there are ame (Japanese candy) and sembei (Japanese rice crackers) on display, the latter standing in imposing old-fashioned round jars on top of the counter. 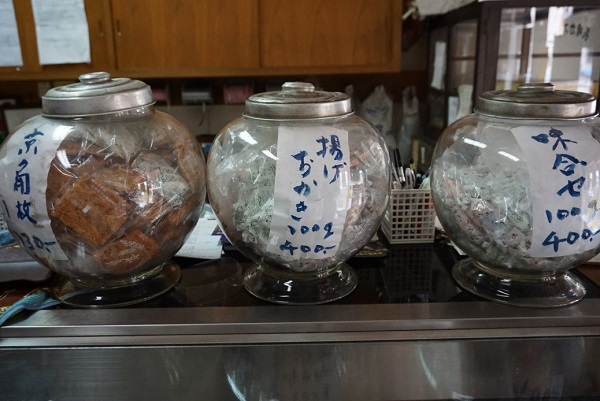 Some of the sweets are enticingly set out on display in small clear packets or open boxes, tempting customers with their intriguing shapes and assorted colours. These are very hard to resist. 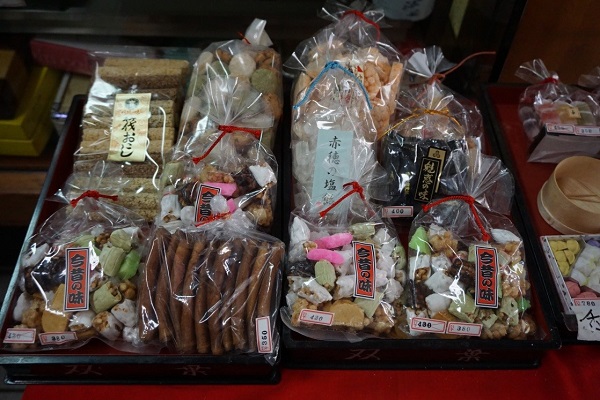 Mr. Mori also makes namagashi. These are fresh sweets made from mochi (Japanese rice cake), which are used in Japanese tea ceremony and are considered to be representative of wagashi. They contain fruit jellies or sweetened bean paste, and are beautifully hand-sculpted using seasonal and natural motifs, such as leaves and flowers. Like other wagashi, namagashi are made of natural ingredients and additives are rarely used. 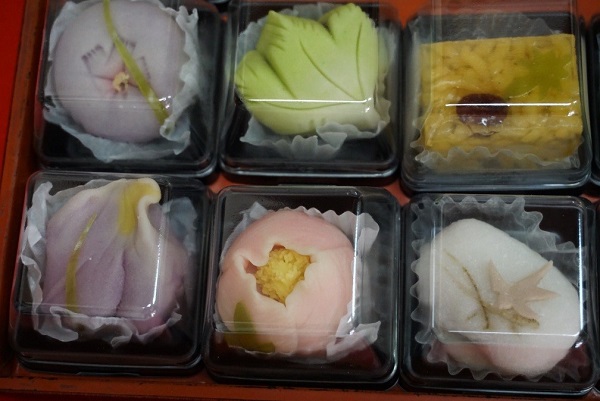 Talking to Mr. Mori, it would seem that the sight of the small local shop producing its own wagashi is slowly vanishing; in Mr. Mori’s case his children do not want to follow in their father’s footsteps, and when some of his older local suppliers fall ill or retire Mr. Mori is unable to place orders. Nevertheless, he still devotes time to studying specialist wagashi publications to come up with his own creations. As he says with a grin, “Even though it looks as though I am relaxing, I’m actually studying very hard.” 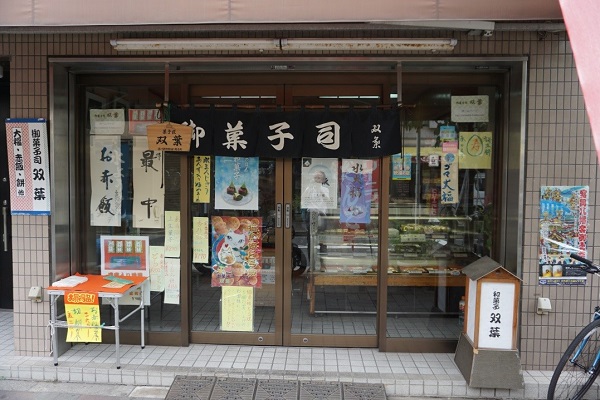 So, if you are ever strolling down Fukagawa Shiryokan-dori Street, why not take the opportunity and drop in to Futaba and experience this traditional taste of Japan?  You’ll not regret it. 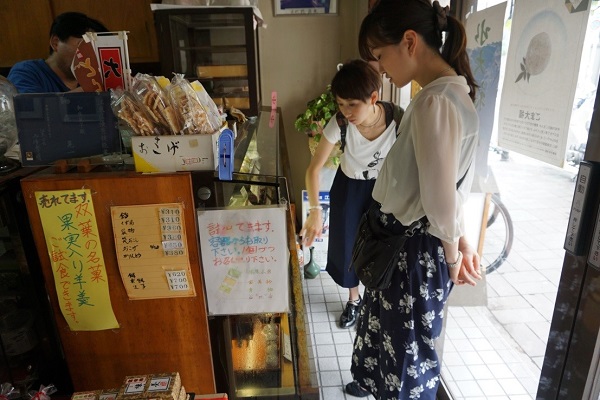