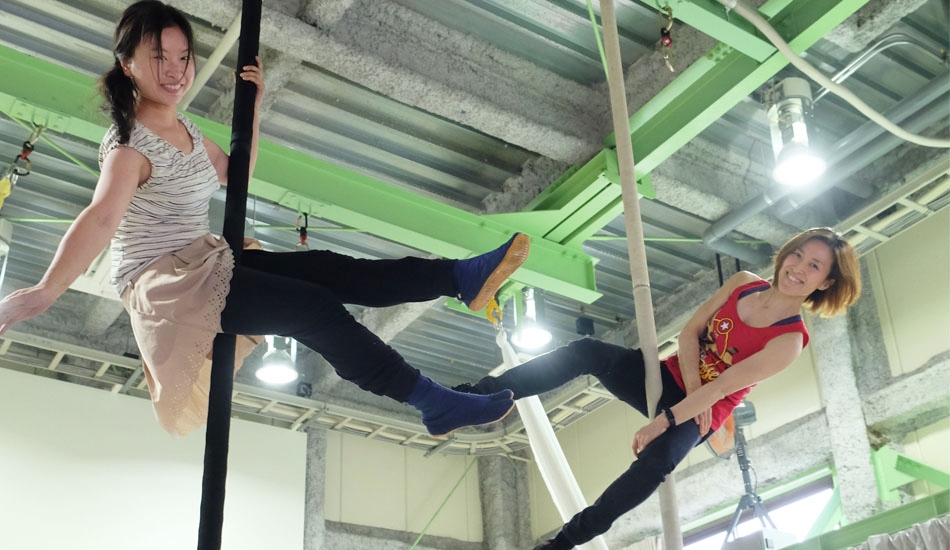 “I hate exercise” comes out of my mouth just as often as “I need to exercise”, which is pretty frequent. At some point, I came to the harrowing conclusion: a healthy lifestyle has to include some form of active movement, even if the only marathon I’d rather partake in is watching eight movies in a row.

But going to the gym feels intimidating, and most places require an initial investment in the form of a membership fee (which then shackles itself to you as guilt when you skip training days). 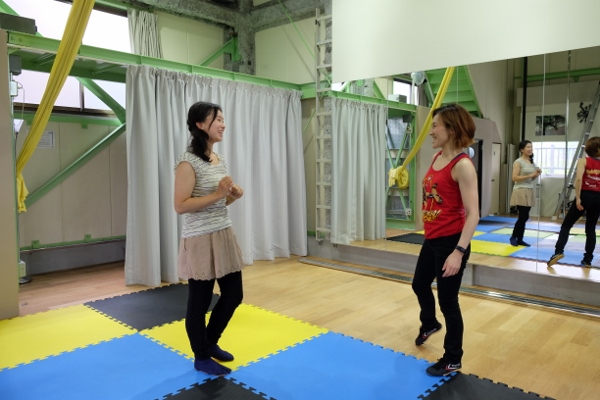 Enter Studio WeBA, an aerial fitness club in Ojima, Koto City, which offers drop-in workshops and lessons with no membership fees necessary, and guarantees a workout sans your traditional sit-ups, push-ups or running laps. Okay, I like the sound of this.

That’s because Studio WeBA hosts a variety of acrobatic training classes using intriguing equipment such as hoops, poles, and tissues. Each one requires tremendous muscle control to master, and will whip you into shape in a novel way. But the instrument of my choice today is the Chinese Pole—a rare instalment, with only Studio WeBA offering classes on it in Eastern Japan. 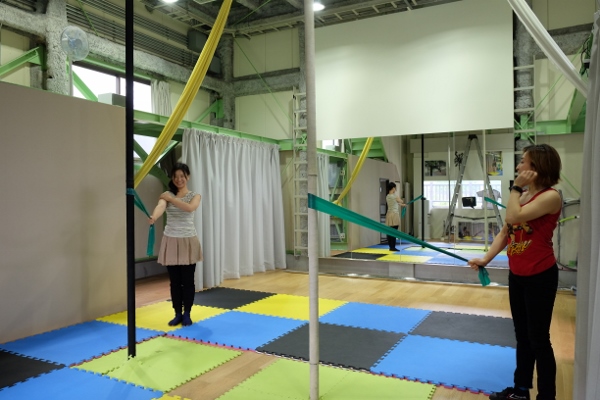 My instructor, teri, first helped me warm up with a series of stretches.

“We’re going to focus on your shoulders,” she says with a grin. “You’ll thank me for it later.” 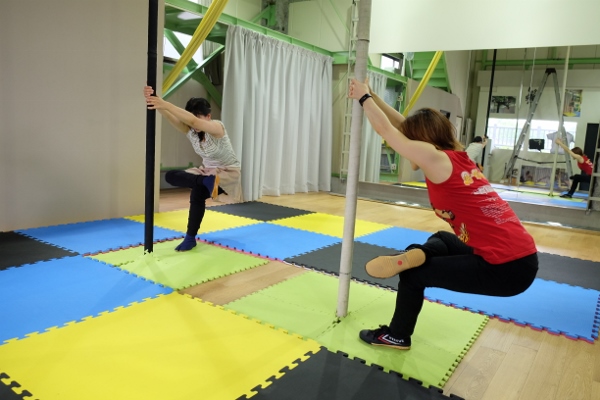 Once ready, she showed me how to hoist myself up onto the poles. Positioning myself, I awaited her signal, and up we went— 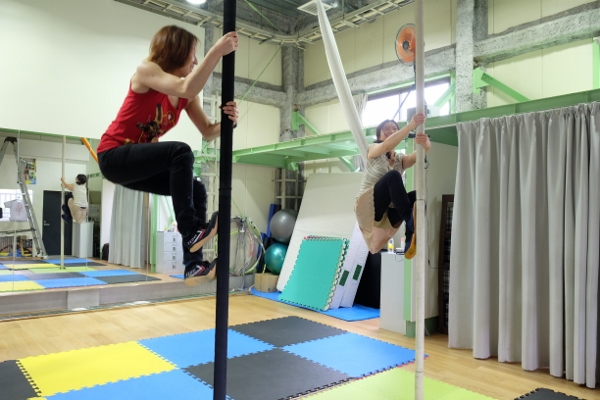 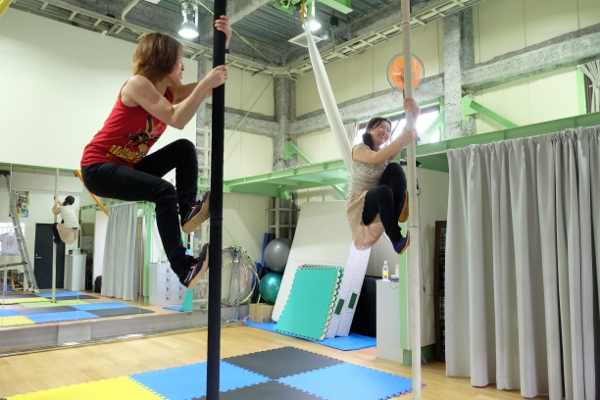 This is way harder than it looks!

“I want you to raise your right hand up at the same time as your right foot, then the same on the other side. Go slow, you can do it!” teri says, but the sheer strength it takes to keep myself above ground alone is already making me tremble! 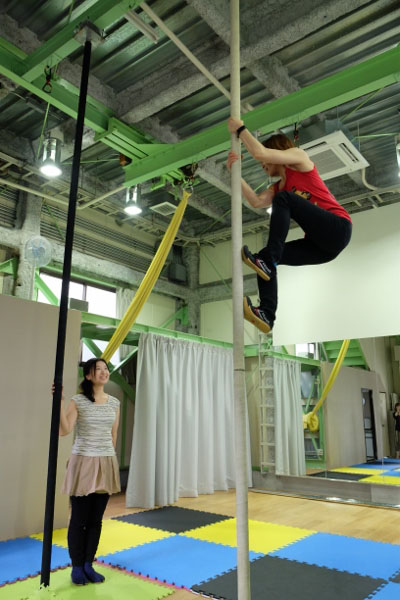 Watching teri’s nimble movements, I was in awe as she showed me again how to go up and down the poles. Her 6 years of training really showed, and her every motion was smooth and steady.

“I used to be a total couch potato though, with no muscles at all,” she told me later with a laugh. 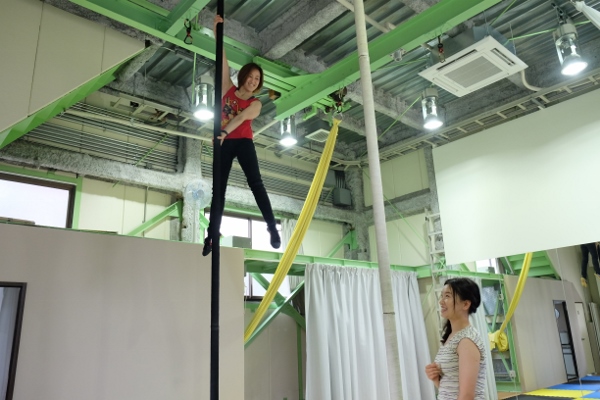 “Let’s try something else. How about this pose?”

You have got to me kidding me, right? …Right?
(She’s supporting herself solely with her arms. What magic is this?) 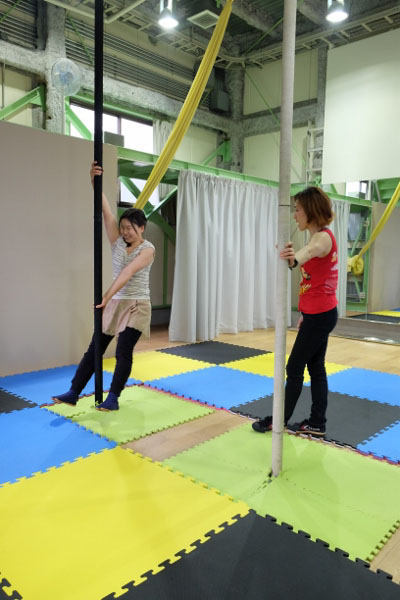 But of course, I’m not expected to master the pose right away. A session at Studio WeBA includes detailed coaching to help you figure out how your body works. After being thoroughly briefed on everything from how to grip the poles to what forces act where (a balance of push and pull is very important) at a safe height, I climb up the poles and attempt to re-enact the same pose. 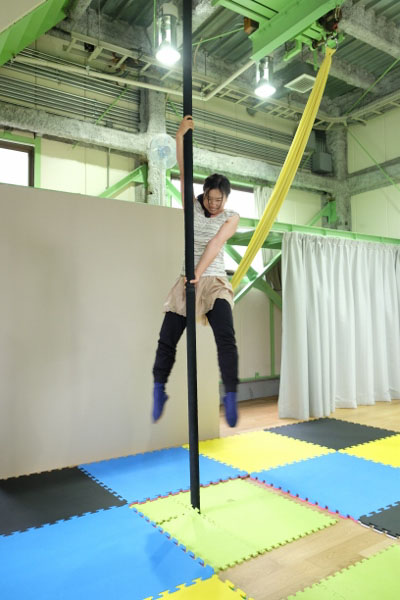 Well, it took me several tries and it was only for a moment, but thankfully Kotomise’s talented cameraperson managed to capture the shot! Forgive the slightly panicked look on my face—I was trying really hard not to fall! 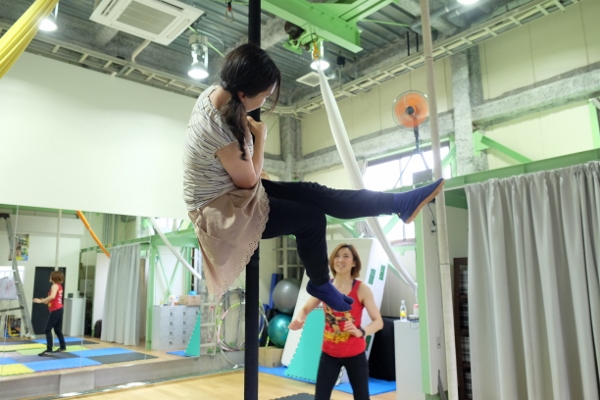 I also learned a sitting pose, which was just as difficult (technically I should let go of the poles, but I couldn’t yet).

But you know what the amazing thing was?

With many other exercises, I often either feel out of control (anything involving hitting, kicking, aiming or catching a moving object fall into this category), or bored (repetitive movements such as jogging, body-weight training etc. fall here). Aerial acrobatics is different. After all, I’m in control of everything—it’s my body, my movements, my muscles. You’re allowed to explore your limits, and the thrill of learning acrobatics combined with the challenging poses definitely kept me from feeling bored. 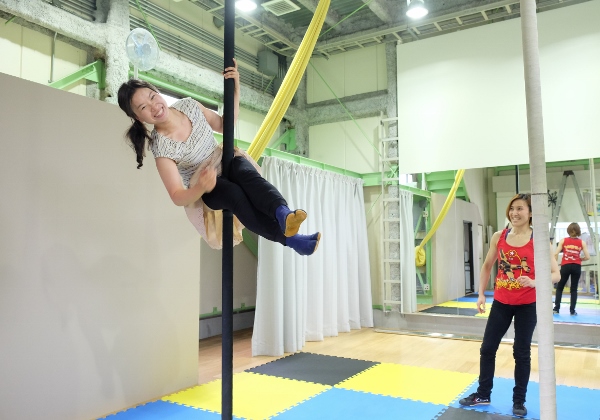 More than anything else, having a fun and engaging teacher like teri was phenomenal. Her energy was infectious, and her friendly chatter between learning the poses helped me refresh both my mind and body, and restart.

And what do you know? By the end of our session, I was able to go up the poles much farther than when I’d first started, though I’ve a long way to go before I’m able to do something like this… 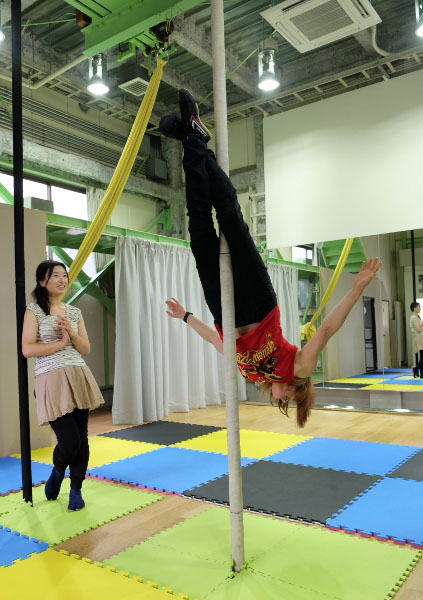 (Seriously, what magic is this??)

For those looking for a new way to get into shape—whether you simply haven’t met an exercise you enjoy yet, want something more challenging, or have an interest in aerial acrobatics—Studio WeBA might be just what you’re looking for. Their workshop and lesson schedules are located on their website, but as long as you confirm your reservation ahead of time, you can essentially join any session and train as often as you like, whenever you like.

As a bonus, teri is functional in English, thanks to her side job as a flight instructor for foreign pilots. How amazing is that? 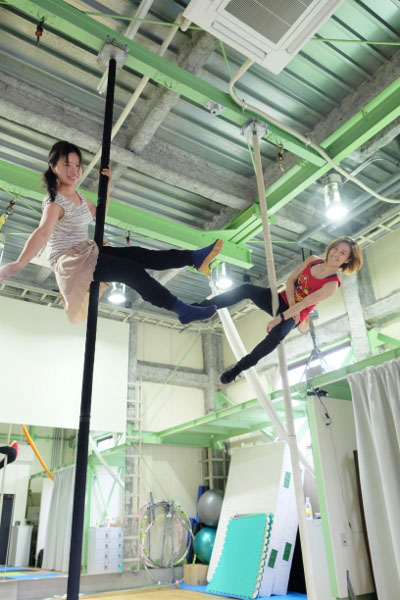 Now who’s ready to get in shape?

(I had some seriously sore muscles the next day—an attestation to just how hard your body has to work! Make sure you stretch thoroughly both before and afterwards to ease the pain!)