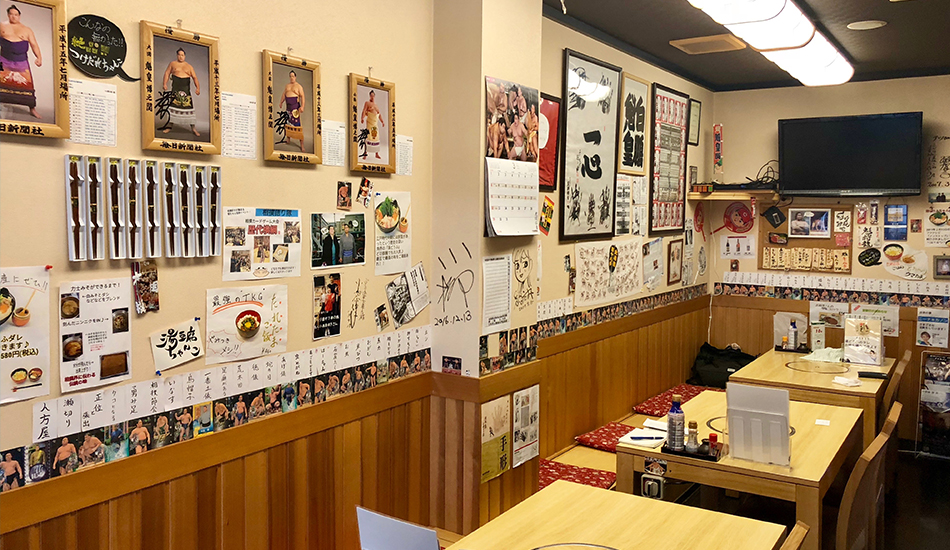 Sumo Bar Kai-chan is unique. Not only is it a chanko nabe hot pot restaurant and bar, but it’s a treasure house of memorabilia from Japan’s national sport, run by a former wrestler and built on the historical site of the Tomozuna stable. On a recent spring afternoon, I dropped in for a chat with proprietor Mr. Kuniaki Nishino. 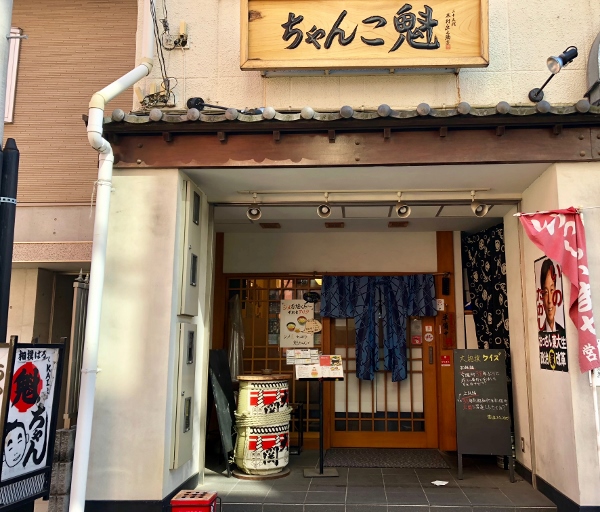 While the exact origins of sumo, Japan’s national sport, are lost in the antiquity of the distant past, it’s indisputable that the modern era of sumo begins in 1684 at the Tomioka Hachiman Shrine near modern day Monzen-nakacho station in Koto-ku. After enjoying a long period of imperial patronage sumo fell into disfavour and was actually banned during the 17th century for causing public disturbances. In 1684, the Edo Bakufu government gave Tomioka Hachimangu Shrine permission to hold two fundraising tournaments a year, paving the way for the sport’s revival. 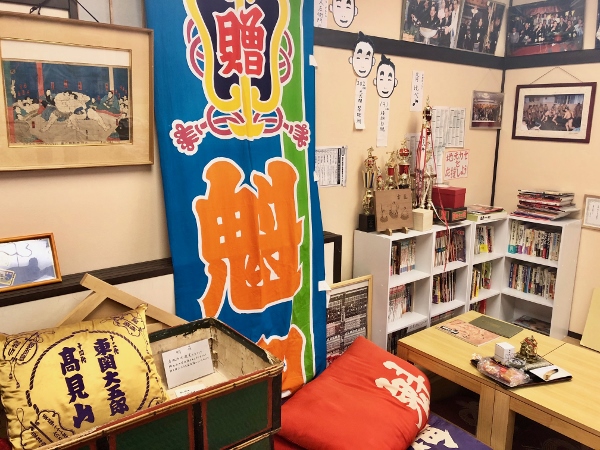 Wrestlers belong to stables (heya in Japanese) where they train and eat together. One of the oldest is Tomozuna, which can trace its history back to at least 1777. Mr. Nishino’s father was known as Kaiki during a wrestling career which took him to the third-highest rank of sekiwake. After retiring he was stable master at Tomozuna from 1989 to 2017. When the stable decided to seek larger premises and moved to the Narihira area of Sumida-ku, Mr. Nishino became the proprietor of the remodeled restaurant which opened in 2011, after his own sumo career was ended by retirement. 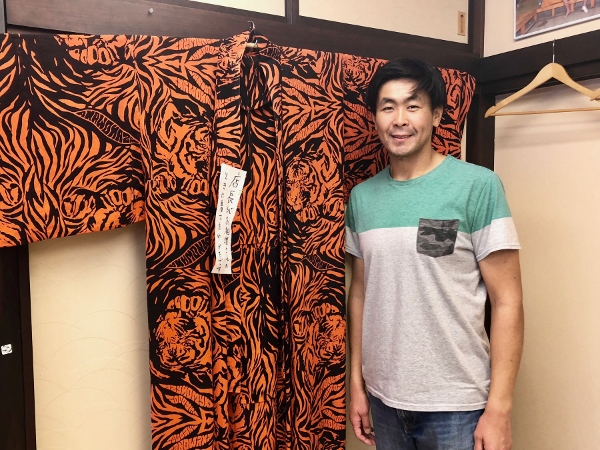 Here, Mr. Nishino stands beside the yukata he wore during his career. Note the tiger pattern! It’s incredibly voluminous, but then it had to be. 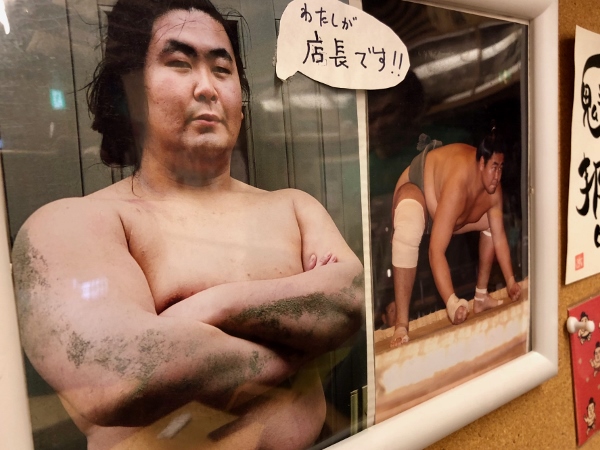 Mr. Nishino in his fighting days as Kaishoryu, some 60kg heavier than now. He’s a marvelous host, full of deep historical knowledge and fascinating insights into the intriguing world of sumo. 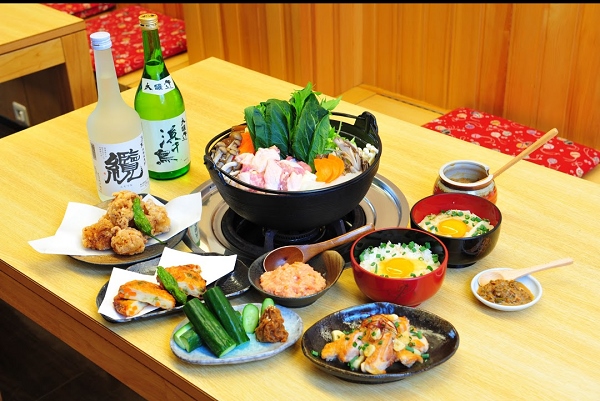 So, what exactly is chanko nabe? “It’s a chicken, tofu, and vegetable hot pot,” he says, “based on a broth of boiled chicken bones (torigara soup). In the old days, eating meat, particularly beef, was largely unheard for various reasons so chicken became the most common food for wrestlers. Of course, wrestlers need to consume vast amounts of food and nowadays most like steak and fried chicken, but those aren’t particularly good for your health. Chanko nabe, with a lot of healthy, fresh vegetables and tofu is both nutritious and healthy.” Looks great, doesn’t it! 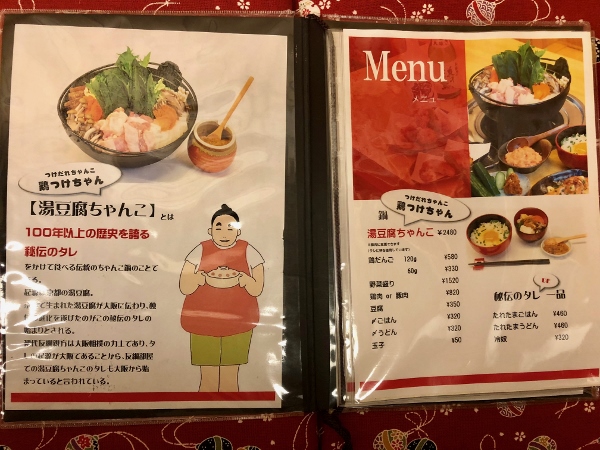 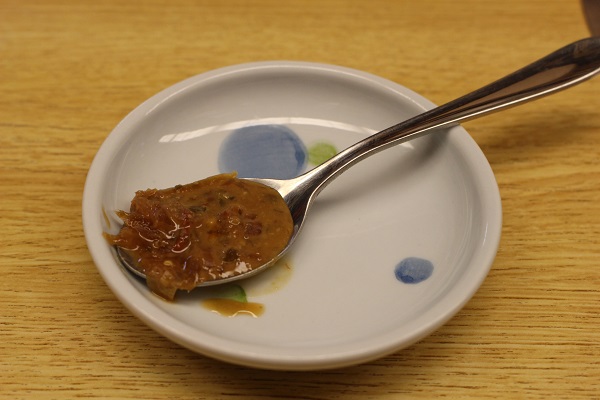 The hot pot is eaten with the secret sauce (tare in Japanese). It’s a hundred-year old blend of negi onions, shaved bonito, and sea lettuce or dried green seaweed in a base of rayu chili sesame oil. 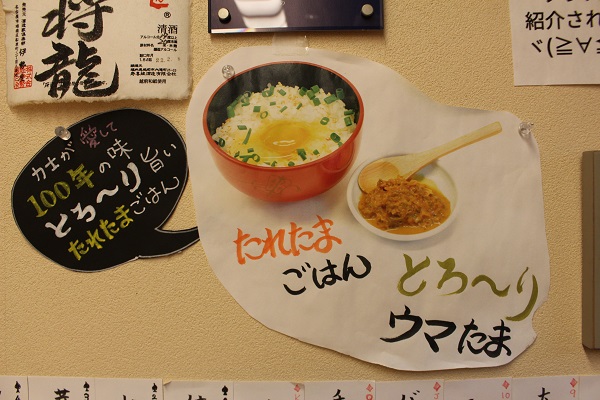 The special tare sauce is very popular on rice mixed with raw egg and chopped scallions or on udon noodles. Just 460 yen apiece! 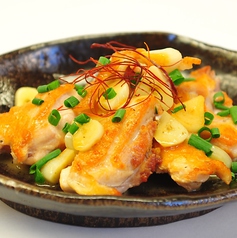 Another popular item is the Kaio garlic chicken, priced at 650 yen. Kaio was a wrestler from the Tomozuna stable who enjoyed a stellar career as an Ozeki, the second highest rank in sumo, winning five tournaments outright and being runner-up in several more, as well as earning many special prizes. He was exceptionally strong even for a sumo wrestler, racking up an astonishing 1,047 wins, the second highest ever, in a prodigious 23-year career. He won his first title in May 2000 after eating chicken cooked with garlic and thereafter ate the dish every day during tournaments for the next 10 years. A superstition that worked, obviously! If you’re facing a difficult challenge maybe Kaio garlic chicken can lead to your success, too. 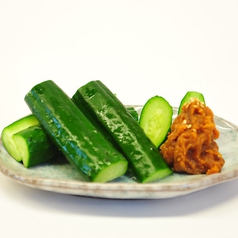 Another interesting item on the menu is “wrestlers’ miso.” A pungent, stamina-building blend of fermented soy bean paste (miso) and garlic, it was carried around by wrestlers on their travels, and was highly valued in the days before refrigeration was universally common. Mr. Nishino recalled his father discussing the early days of his career when wrestlers would eat rice topped with garlic miso, chicken and boiling water while on exhibition tours in the height of summer. It’s eaten with cucumber and is a great way to fight summer fatigue, whether you’re a wrestler or not! 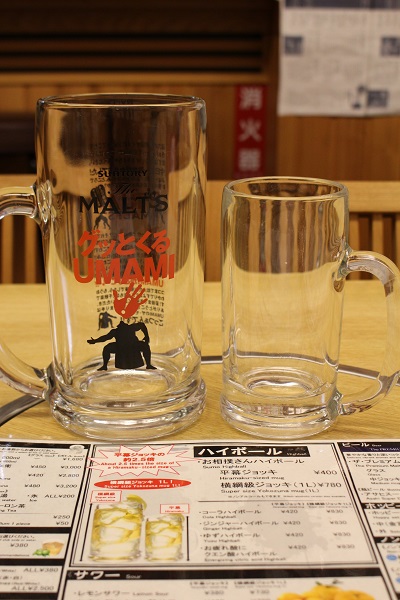 While Kaio famously attributed his first tournament win to cutting back on his beer consumption, there’s no reason for customers at Sumo Bar Kai-chan to do the same. In fact, it’s just the opposite as this one litre “yokozuna” highball allows you to drink like a grand champion for just 780 yen. Rank-and-file highballs are available for 400 yen. The draft beer is Premium Malt’s with a selection of sake, shochu, wine, sours and non-alcoholic drinks to quench your thirst. 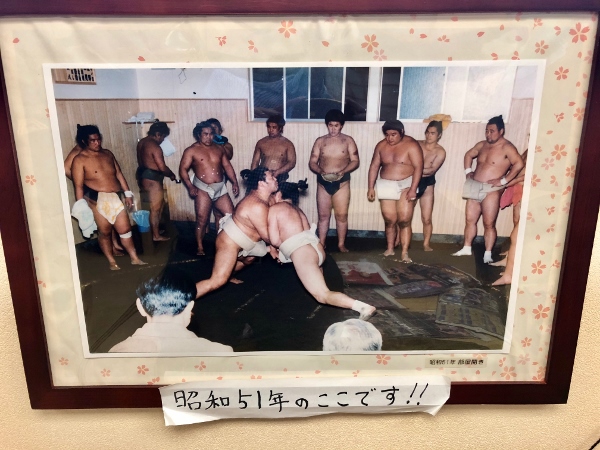 The back room was once the practice area for the wrestlers of Tomozuna stable. This photo, taken in 1976, shows the windows in the same position as now. 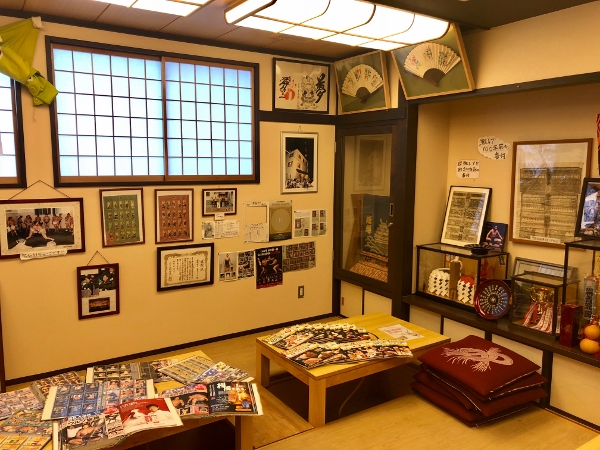 Although everything else has changed and the room is now a treasure trove of items connected to the Tomozuna stable and sumo in general. 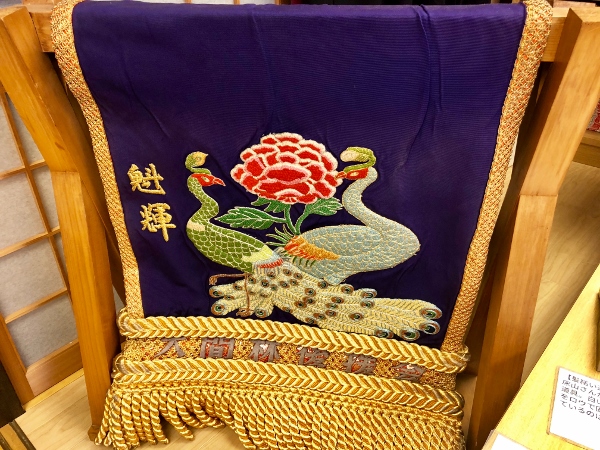 This is Mr. Nishino’s father’s ornamental apron as worn by wrestlers for ring-entrance ceremonies. They’re hand-sewn by specialists and cost a small fortune, as you can imagine. 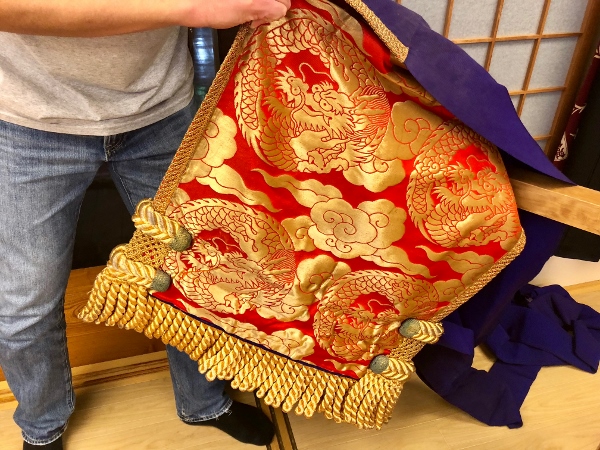 The back is equally as beautiful, with a design of dragons and clouds. 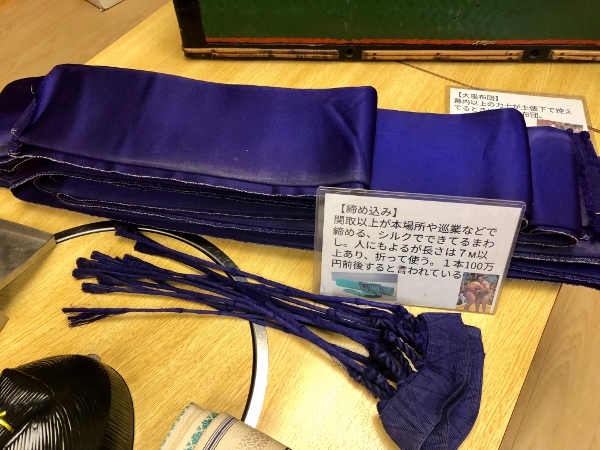 These silk belts (mawashi) are 7 metres long, cost around 1,000,000 yen apiece and are never washed. “Washing would ruin them,” explains Mr. Nishino. “They’re just hung up and allowed to dry naturally after every tournament.” 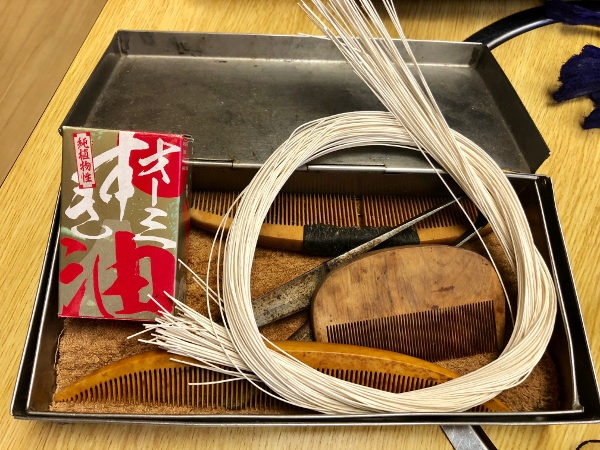 These hair accessories are the real thing and still smelled of the special hair oil (bintsuke) used by sumo wrestlers. 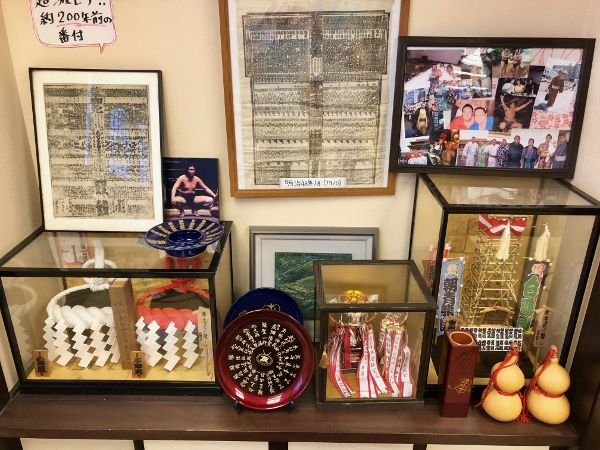 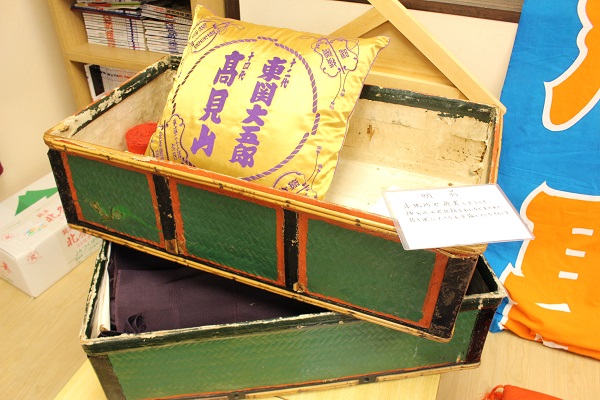 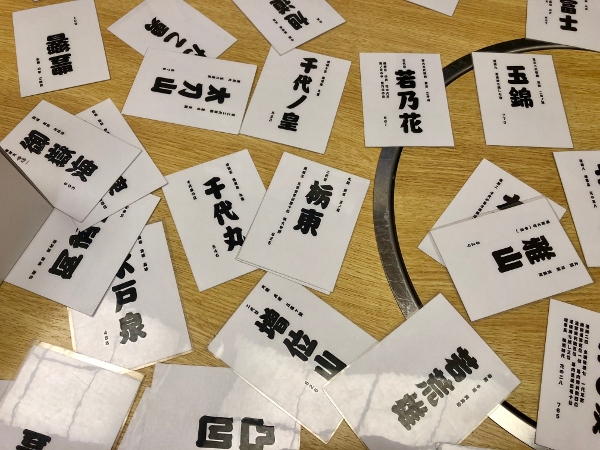 There’s even a sumo card game, invented by Mr. Nishino, that he sometimes plays with customers. 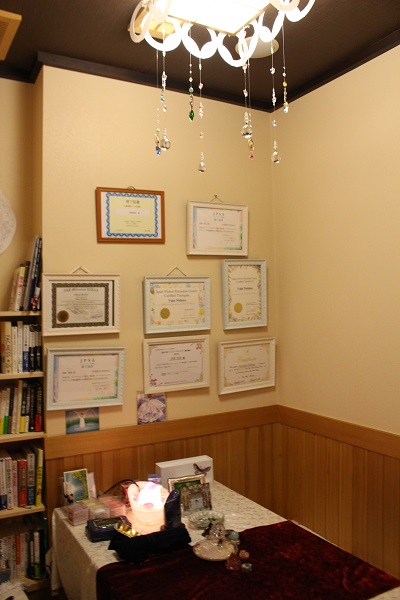 Besides running the restaurant with his sister-in-law, Mr. Nishino has a variety of qualifications that allow him to work as a counselor and adviser, with a speciality in child-raising. He is also a qualified astrologer. There is a designated corner for consultations. 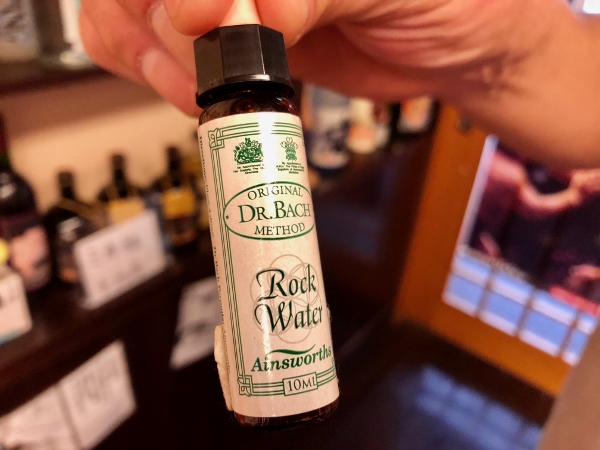 Mr. Nishino’s wife Nina, a professional singer, is also a qualified NLP master, a hypnotherapist and a Bach flower remedy therapist. They’re an interesting couple, to put it mildly. Sumo Bar Kai-chan is a unique place; there’s literally nowhere else in Japan like it. If you’re interested in sumo it’s unmissable; if you’re interested in a unique dining experience it’s a must-visit, too.