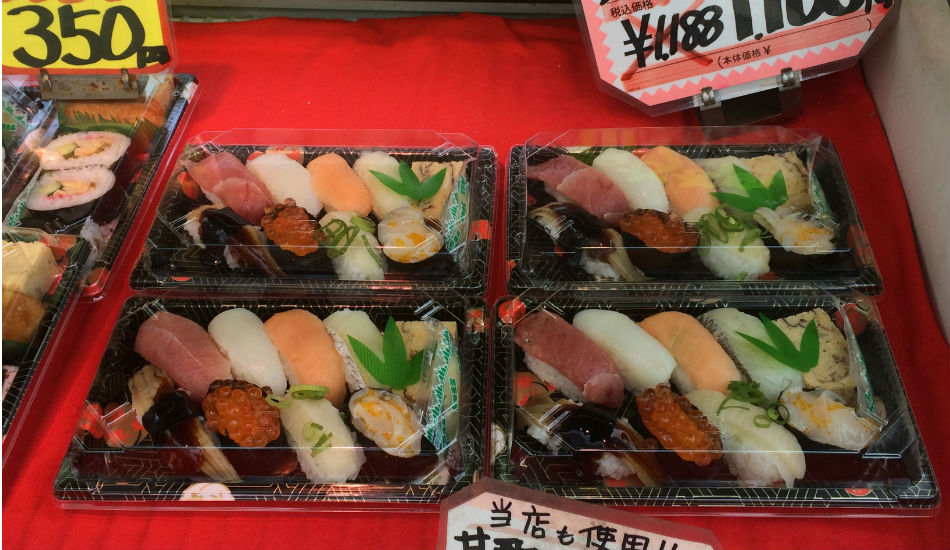 Sushi and Sumo at Sushimoto

The sushi shop and delivery service Sushimoto has been purveying its fares in the downtown are a of Ojima since 1969. It’s located on the Sunroad Nakanohashi Shopping Street, a few minutes’ walk from Ojima Station. 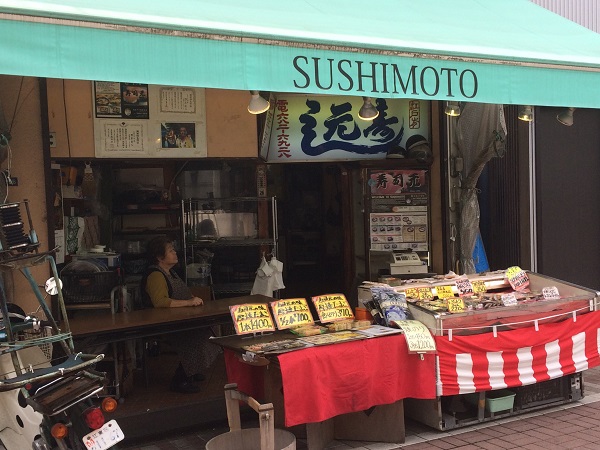 “It’s hard to imagine now,” reminisces Mrs. Sawahara, matriarch of the family that has run the shop since its establishment, “but in those days this street was so crowded you couldn’t ride a bicycle along it. My husband opened the shop and I worked with him, together with four other staff members. In those days refrigeration technology was poor, so fish was bought and eaten on the same day. So many things have changed since those days but one hasn’t: the quality of our fish.” 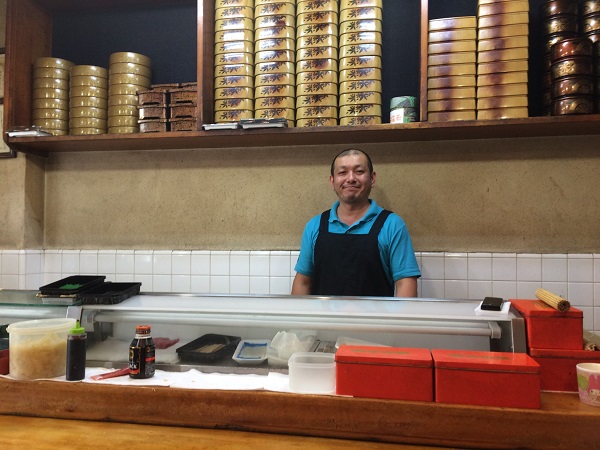 Her son and current proprietor Hisato Sawahara echoes her comments.”Just as my father did, I get up at 3 a.m., have breakfast and make phone calls. The auction at Tsukiji fish market begins at five and finishes around six. My wife works in the market and I go down there to pick up the best quality fish at the most reasonable prices I can find. That’s why our sushi has such good value for money. Also, having the shop here in Ojima means we aren’t paying massive overheads like the high-end places in Ginza.” 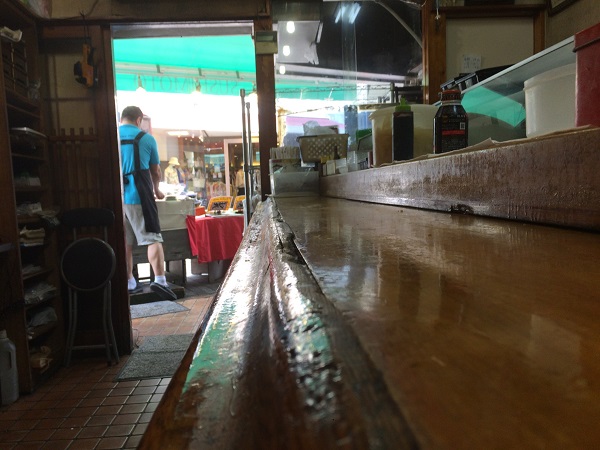 After returning to the shop Mr. Sawahara and the rest of his family slice the fish and prepare the sushi. Then he makes deliveries as lunch orders come in while his mother and sister deal with the passing trade. Although the shop doesn’t operate as a restaurant nowadays, tourists who buy sushi are invited to eat at the counter inside. “People passing by said they wanted to try our sushi but had nowhere to eat it. We invite them in and they can sit at the counter, just as in the old days.” 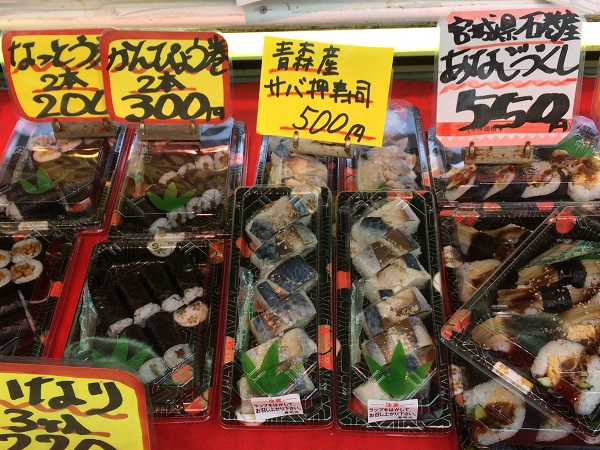 Tuna is the most popular fish all year-round. Mr. Sawahara offers some interesting advice for maguro-lovers:” About 40% of the tuna sold in Japan is caught here while the other 60% is imported. The imported tuna is frozen but the domestically caught fish aren’t. You can smell and taste the difference immediately. In the future though, the amount of domestic tuna will decrease and the price will rise as a result. It’s going to become expensive, so if you want totally authentic traditional maguro you should eat it now.” 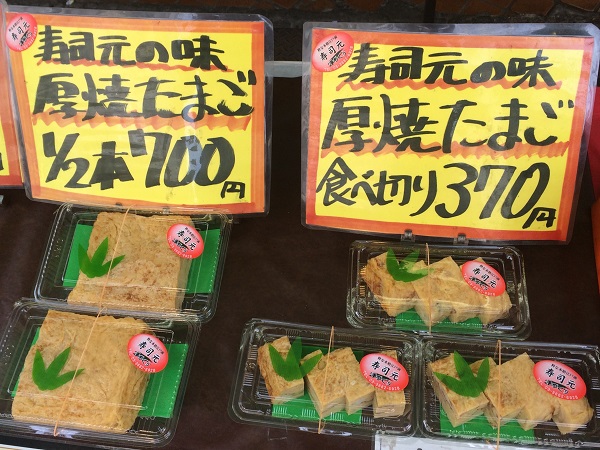 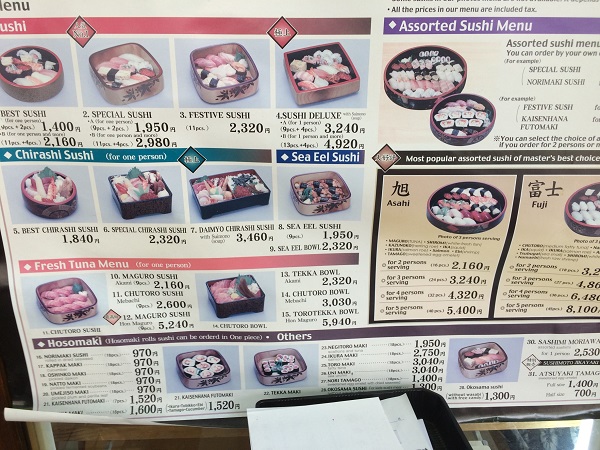 Not only does Sushimoto sell top-quality fish at affordable prices, it also has a delivery menu in English and caters events, such as birthdays, graduations or office parties. With just three days’ notice, Sushimoto can cater events for 20 to 300 people, starting at 3,240 yen per head. 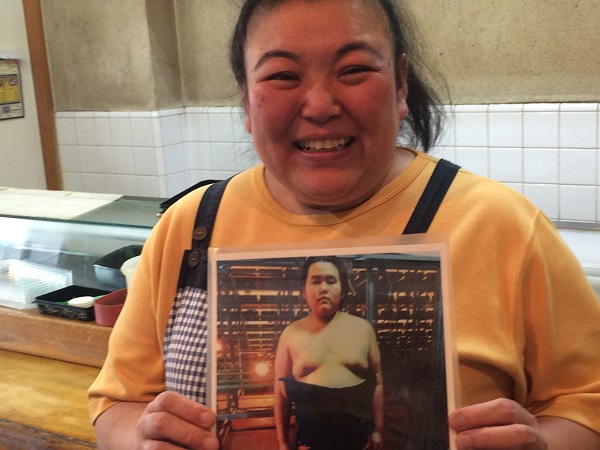 Visitors to the shop will spot various sumo memorabilia displayed on the walls, including the handprints of the great yokozuna (grand champions), Taiyo and Asahifuji. The latter is now the head coach of the Isegahama Stable, located in the Mori area of Koto-ku, where Mr. Sawahara’s sister’s son is a junior wrestler under the name of Sawanofuji. 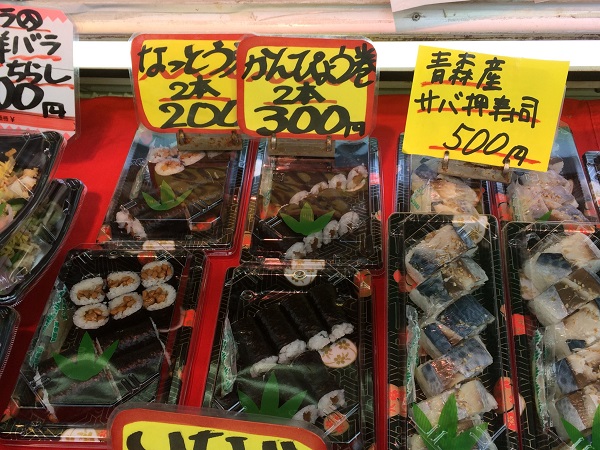 Sushi and sumo. Sushimoto and the Sawahara family are continuing these two great traditions in true Koto-ku style: hard working, friendly and welcoming. When you’re in the area, drop in and treat yourself to the authentic taste of real sushi. Your taste buds and your wallet won’t regret it. 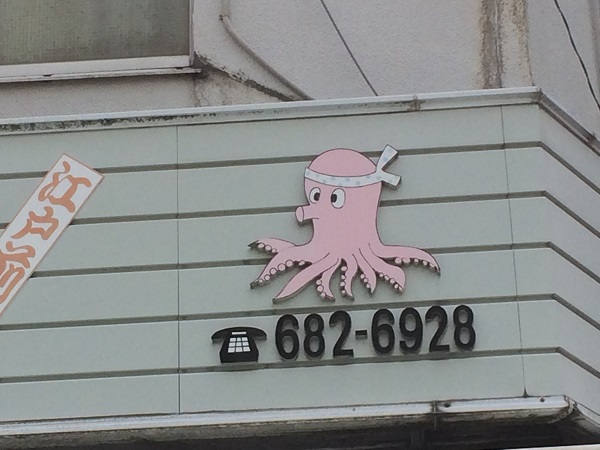 A free serving of a side dish for dining customers.